August a good month for business as usual in Detroit


WXYZ mentioned the annual sales rate in passing, but Bill McBride atCalculated Risk headlined it in U.S. Light Vehicle Sales increase to 16.0 million annual rate in August.  He then put the sales numbers in chart form for perspective. 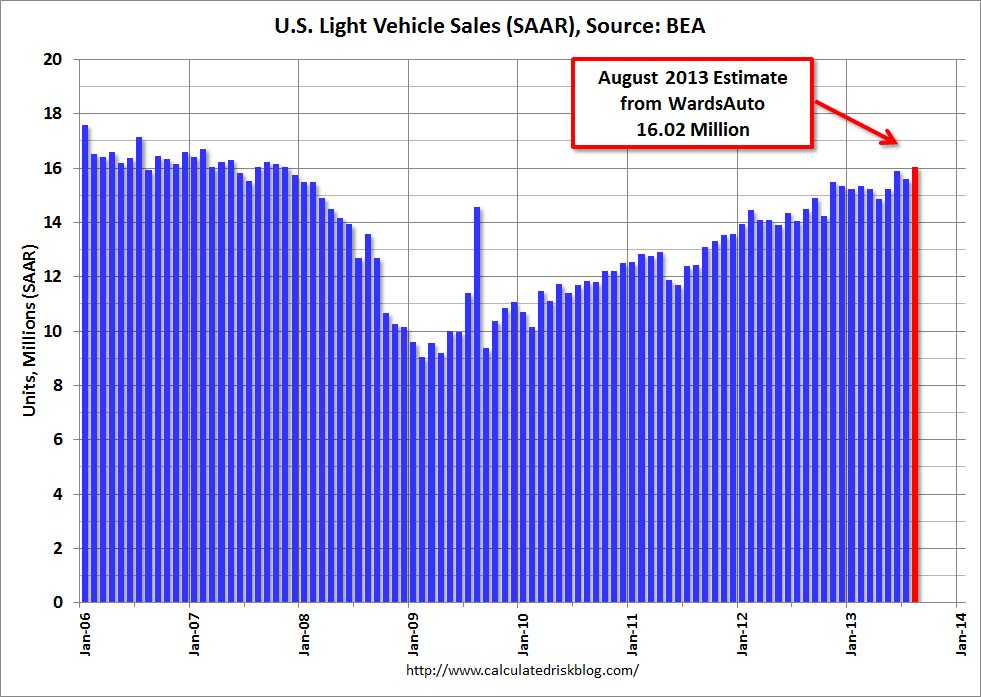 Last month was the best month for car sales since November 2007, the last month before the Great Recession began more than five years ago.  I can even say it was a hot month, just like it was for this blog.

Of course, the strong performance of the auto companies contributed to an improving local economy, as Wayne State University described in Southeast Michigan Purchasing Managers Index for August shows continued growth in economy, which came out on September 5, 2013, the same day as the auto sales figures.

DETROIT- The Southeast Michigan Purchasing Managers Index (PMI) for August is 60.2, which is a marked increase over July's PMI of 53.1, reflecting continued strengthening of the economy. The three month average is relatively unchanged at 54.2.

Butler also reported the Commodity Prices Index rose in August to 55.6 from 54.8 in July and prices for brass coil, copper and polypropylene increased, while petroleum is reported down in price.

"The strong PMI score is primarily a result of the improved Production, and New Orders Index values, both of which increased by more than ten points," according to Timothy Butler, associate professor of supply management at Wayne State's School of Business Administration. "Specifically, the Production Index increased in August to 68.5, from 54.8 in July, while the New Orders Index, a key component of the PMI, rose to 64.8 August from 53.2 in July. These values correspond closely to positive news from domestic automakers regarding sales, and to generally positive consumer confidence reports," Butler said.

Happy Motoring in the U.S. has peaked, but it's nowhere near dead yet.
Posted by Pinku-Sensei at 8:38 PM