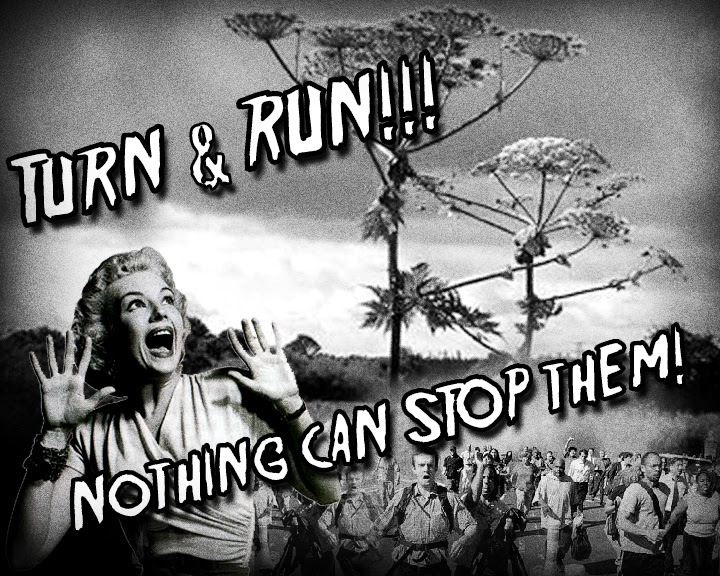 Last November, I concluded Rutgers on Sandy anniversary and other climate news with something appropriate for Halloween.


Speaking of invasive plants, here's one that scares my students, complete with spooky music appropriate for Halloween.

Attack of the Giant Hogweed

Protect yourself from Giant Hogweed. Its toxic sap can cause severe burns.

It still scares my students and this time, they brought it up first.  When asked in my biodiversity class if I had heard about Giant Hogweed, I played the above video along with this one from Michigan: Giant Toxic Plants Pop Up in Mid-Michigan.


Those videos answered their questions, although they weren't reassured.  What was reassuring is that Giant Hogweed is rare in Michigan.  That's a good thing for a plant that is more toxic than poison ivy.

Speaking of poison ivy, it's likely to become more dangerous as the climate warms.  Follow over the link for a press release from Virginia Tech that I included in Overnight News Digest: Science Saturday (Fathers Day) on Daily Kos.


BLACKSBURG, Va., June 11, 2014 – Much to the chagrin of gardeners, hikers, and virtually anyone enjoying the outdoors, one of the hazards of summer is picking up an itchy poison ivy rash.

But researchers in the Virginia Tech College of Agriculture and Life Sciences have found an effective way to kill poison ivy using a naturally occurring fungus that grows on the fleshy tissue surrounding the plant’s seed, potentially giving homeowners and forest managers the ability to rid landscapes of the pernicious pest. Their findings could make the maddening itch of the summer season a thing of the past for the untold millions who are allergic to the plant.

The study was published this week in the journal Plant Disease and is a first of its kind on a plant that affects millions but has had surprisingly little research done on it.

John Jelesko, an associate professor of plant pathology, physiology, and weed science, began studying the plant after experiencing a nasty poison ivy rash himself while doing some yard work. Much to his surprise, there was scant research focused on the plant itself. Most of the work was centered on urushiol, the rash-causing chemical found in the plant’s oils. Urushiol is extremely potent. Only one nanogram is needed to cause a rash, and the oil can remain active on dead plants up to five years.

But rather than focusing on urushiol, Jelesko set about studying ways to kill the plant itself. He worked with Matt Kasson on the project, a senior research associate in the same department.

“This poison ivy research has the potential to affect the untold millions of people who are allergic to poison ivy,” said Jelesko, a Fralin Life Science Institute faculty member. “We have the makings of a nonchemical way to control an invasive plant that can be used by homeowners and others who manage outdoor sites.”

Their work is especially valuable in light of the fact that a 2006 study showed that as the planet warms, poison ivy is predicted to grow faster, bigger, and more allergenic, causing much more serious reactions that could send an increasing number of people to the doctor for prescription medications.