Greenland melt and drought from the University of California 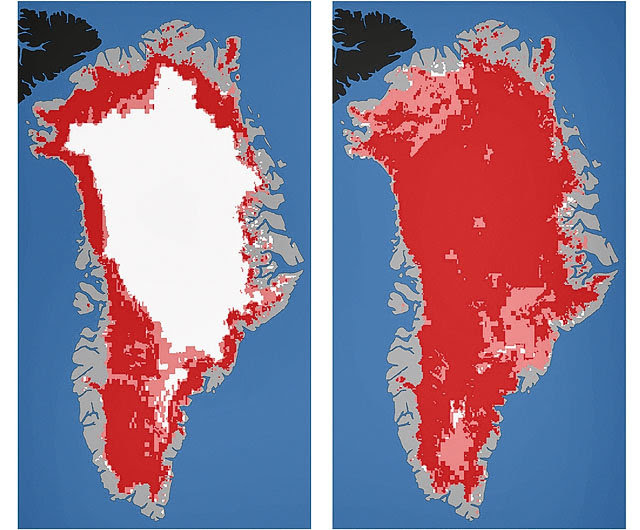 The week after NASA on West Antarctic ice sheet collapsing, more bad climate news came out from the University of California system.  I missed it until I compiled Overnight News Digest: Science Saturday (Greenland melting, too) for Daily Kos last week, when I featured the research news from the UC system campuses in advance of Tuesday's primary in California.

First, as if West Antarctica collapsing into the Southern Ocean wasn't enough, University of California at Irvine reported on May 19, 2014, that Greenland will be far greater contributor to sea rise than expected.

Greenland’s icy reaches are far more vulnerable to warm ocean waters from climate change than had been thought, according to new research by UC Irvine and NASA glaciologists. The work, published today in Nature Geoscience, shows previously uncharted deep valleys stretching for dozens of miles under the Greenland Ice Sheet.

The bedrock canyons sit well below sea level, meaning that as subtropical Atlantic waters hit the fronts of hundreds of glaciers, those edges will erode much further than had been assumed and release far greater amounts of water.

Ice melt from the subcontinent has already accelerated as warmer marine currents have migrated north, but older models predicted that once higher ground was reached in a few years, the ocean-induced melting would halt. Greenland’s frozen mass would stop shrinking, and its effect on higher sea waters would be curtailed.

Looks like twenty feet of sea level rise when global warming takes its course in a couple of centuries is not out of the question.

The very same day the above news was announced, the University of California at Davis published Scientists forecast economic impacts of the drought on Central Valley agriculture.


California’s drought will deal a severe blow to Central Valley irrigated agriculture and farm communities this year, and could cost the industry $1.7 billion and cause more than 14,500 workers to lose their jobs, according to preliminary results of a new study by the UC Davis Center for Watershed Sciences.

Researchers estimated that Central Valley irrigators would receive only two-thirds of their normal river water deliveries this year because of the drought.