When I read a week or so ago that Neel Kashkari was one of the candidates for California Governor, I thought I recognized the name.  It turns out that I read about him at Hysterical Raisins in 2008.  He was former Treasury Secretary Henry Paulson's Interim Assistant Secretary for Financial Stability, which means he ran the $700 billion mortgage rescue effort during the last year of the Bush Administration.

My friend Nonnie noted his resemblance to both Paulson and Mini-Me, so she created one of her movie poster parodies.  Here's what she and I had to say in comments at the time.


Nonnie: For some reason, kids, the appointment of Neel Kashkari makes me very uneasy. I can’t put my finger on quite why. Is it that his name looks like Cash & Carry? No, that’s not it. OMG!! I remember now!! It’s that company picture that they took together before Paulson left to be Treasury Secretary!! 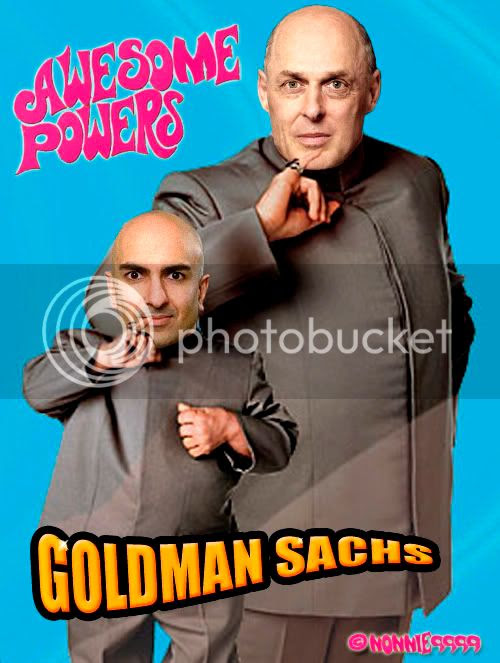 Nonnie: as soon as i saw cash & carry, the first thing i thought was that he looked like a young clone of paulson. tell you a secret–i only saw the first austin powers movie, but mini me immediately came to mind.
...
Me: Kashkari=looks scary!

Seriously, those piercing black eyes are absolutely unnerving. His nose is also crooked, as if it had been broken in a fight.

However, I think turning Paulson and Kashkari into Dr. Evil and Mini-Me is brilliant! Of course, Bernanke is Number Two, but who would you have playing the rest of the cast?

Nonnie: the title is just a line from the movie that i found when i googled (i didn’t see the film). i thought it fit the theme, so i went with it. i’m like princess sarah and capt underpants–i go with the sound byte, even if it doesn’t hold up to scrutiny

Me: Oh, the sound byte stands up to scrutiny just fine.

BTW, if things go really bad economically, I have a movie suggestion for you–Fight Club.

Nonnie: fight club, starring john mccain and barack obama with one hand tied behind his back to make it more even.

Nonnie missed the point about Fight Club (I was thinking of the final scene, which at the time made for a good metaphor for the financial collapse.), but she did call what has going to happen in the election the next month pretty accurately.  As for my opinion of Kashkari's looks, that still holds.  Here's to Jerry Brown, who is not only married (I never thought I'd see that happen) but married to a woman from Bloomfield Hills, Michigan, wiping the floor with Cash And Carry this November.
Posted by Pinku-Sensei at 10:06 AM