$1.99 gas arrives in my neighborhood 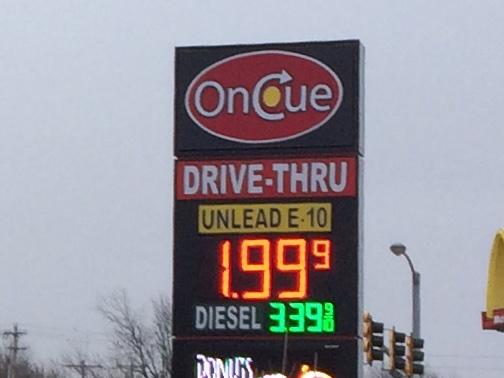 While the corner station did the expected since Good economic news on Christmas Eve 2014 by matching the three stations down the street at $2.07, those three outlets did the unexpected by dropping their price for regular to $1.99.  That's some after-Christmas sale!*

While I was surprised, Gas Buddy shows that I shouldn't have been, as the Detroit average was $2.09 yesterday and $2.10 today.  $1.99 is exactly what I should have expected.

As for whether prices will continue falling, Oil-Price.Net suggests that they are near a bottom, as it looks like crude oil has finally found a support level.  WTI has been bouncing off of $55 for two weeks and Brent has been hitting downward resistance at $60 for almost as long.  Besides, the week between Christmas and New Years is usually when prices hit bottom for the year and begin rising.

I'm not alone in thinking so.  Patrick DeHaan of GasBuddy told WOOD-TV a similar story in Gas prices drop below $2 in GR, Kzoo a few days ago.

*I was planning on posting about the tenth anniversary of the Indian Ocean tsumami, but I'm just not up to that much gloom right now.  Maybe later.
Posted by Pinku-Sensei at 7:14 PM