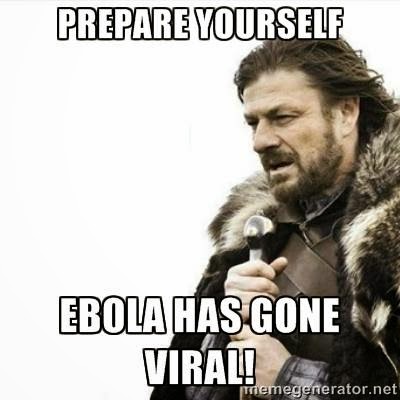 I promised something more serious to follow Marching band moments.  Overnight News Digest: Science Saturday (Orion test mission) did the work for me, providing me three stories on a common theme, the use of social media in research, activism, and education.

First, Carolyn Shapiro of the University of Vermont describes The Social Contagion of Fear: Clark Analyzes Ebola Discussions on Twitter.

Twitter lit up with references to “virus” and “death” and descriptions of “scary” and “terrifying.” Some less-worried tweets mentioned “cure” and even “jokes.”

These words became building blocks for Eric Clark’s latest “social contagion” study. A mathematician and doctoral candidate working in the University of Vermont Department of Surgery, Clark is finding ways to use data-processing power and social media to take the public’s temperature on health issues and current events. He works under the mentorship of Assistant Professor of Surgery Christopher Jones, Ph.D., director of the Global Health Economics Unit in the Center for Clinical and Translational Science.

As I wrote in Ebola news from campuses on the campaign trail and Discovery News, the message from the authorities remains "Don't Panic."  Now that there are no longer cases in the U.S., people have stopped freaking out--for now.*

Follow over the jump for two more uses of social media.

COLUMBUS, Ohio – The serious air pollution problem in China has attracted the attention of online activists who want the government to take action, but their advocacy has had only limited success, a new study has revealed.

Instead, much of the online conversation has been co-opted by corporations wanting to sell masks, filters and other products and by government officials advancing its own environmental narrative, the study finds.

Researchers at The Ohio State University analyzed about 250,000 posts on the Chinese social media site Sina Weibo (similar to Twitter) that discussed the pollution problem in the country.

They concluded that online activists did force the Chinese government to take some actions to tackle the pollution problem. But they also found that business and government dominated much of the conversation and used it to their own advantage.

Air pollution was number one among China's top six environmental problems.  I'm not surprised that it's getting this kind of attention in social media.


BOWLING GREEN, O.—You might find dietetics students tweeting in Carrie Hamady’s classes, but far from casual conversations with friends, their Twitter chats are responses to their assigned readings and interactions with Hamady or even other professionals in the field. Hamady and her colleagues in the dietetics program have incorporated the social media form into their classwork and professional development.

Hamady, an instructor and coordinator of undergraduate dietetics in the School of Family and Consumer Sciences, recently won the Innovations in Dietetics Education Award at the Food and Nutrition Conference and Expo (FNCE), at the Academy of Nutrition and Dietetics annual meeting, with her presentation "Using Twitter to Enhance Engagement in Undergraduate Nutrition Courses."?FNCE is the world's largest meeting of food and nutrition professionals.

She and colleagues Drs. Mary-Jon Ludy and Dawn Anderson used an innovative teaching grant to develop new ways to structure their classes. Graduate student Molly Kayser was also involved with the project.

“We wanted to integrate more technology into our coursework to prepare our students for 21st-century health-care education and to teach them to use Twitter professionally,” said Hamady.

This story may not be as earth-shaking as Ebola or Chinese air pollution, but it shows the importance of technology in education.  Besides, it may lead to better hospital meals in the future.

*I have a big backlog of Ebola news.  I should get around to posting it once the semester is over.  That's only a week away.