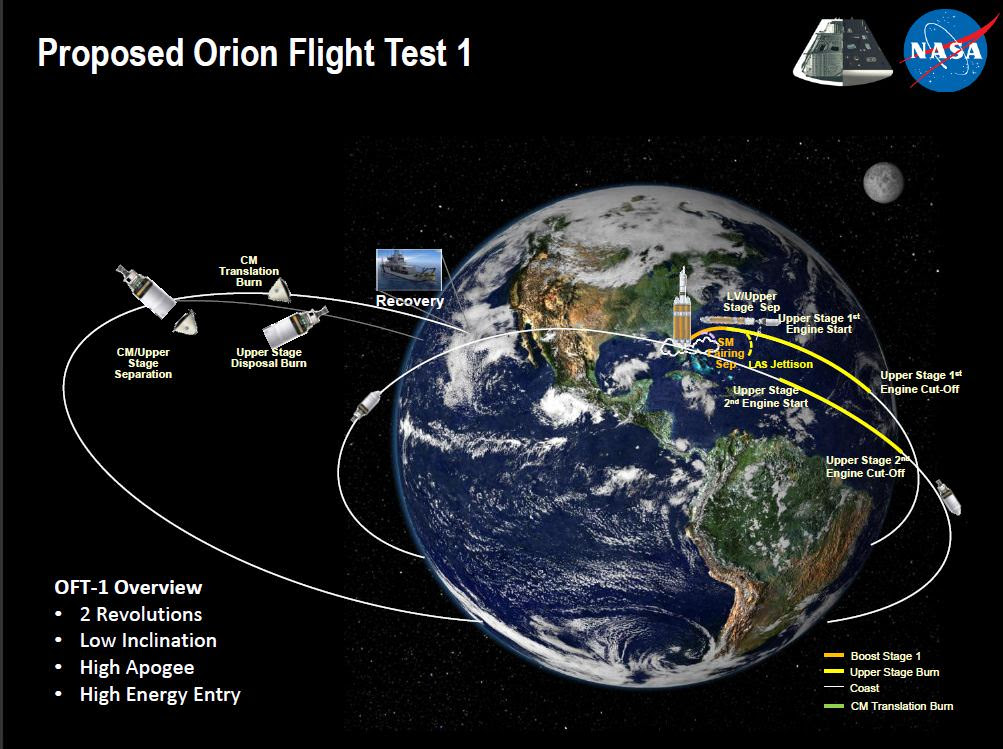 The successful first flight test of NASA’s Orion spacecraft on Dec. 5 not only was a historic moment for the agency – but also was a critical step on NASA’s Journey to Mars. Orion rode to space from Cape Canaveral Air Force Station on a Delta IV heavy rocket with no crew, but loaded with about 1,200 sensors. The flight test basically was a compilation of the riskiest events that will happen when astronauts fly on Orion on deep space missions. Also, Journey to Mars briefing, 1st SLS flight barrel and Commercial crew milestone.

It turned out that Orion's first test flight was on Friday, not Thursday, but it still took place and, as far as outside observers can tell, was a smashing success, as the spacecraft launched, it followed its intended flight path, and the capsule returned on schedule and on target.  As Mirium Kramer of Space.com reported, NASA's Orion Spaceship Test a 'Textbook Spaceflight'.

The Orion spacecraft appeared to function spectacularly during the risky unmanned test flight in space, and also as it came back through Earth's atmosphere and splashed down in the Pacific Ocean. Some people are comparing this historic capsule to the capsules flown during the Apollo program that brought NASA astronauts to the moon for the first time.

"It was just such a textbook spaceflight," said NASA astronaut Rex Walheim, who worked with the Orion team to develop the spacecraft. "That's what we want for our first flight."

As I said, it looked like a smashing success.  That written, even the engineers and scientists will be very busy examining the data to see how much of a success the flight really was.

Although the test flight appeared to go off without any serious hitch, engineers can still gather useful data from the flight, NASA officials said.

"We didn't see anything major; that's clear," Mark Geyer, NASA's Orion program manager, told Space.com during the briefing. "It looks like it flew very close to what we expected, but we have 1,200 sensors, thousands of pieces of data that we're going to get back, and I'm sure we're going to find some very interesting things about how it behaved."

Here's to finding all the bugs and improving the spacecraft for the next flight.

Follow over the jump for videos of the testing that lead up to yesterday's mission, along with launch and splashdown.

After years of design, fabrication and testing Orion completed a perfect launch into Earth's orbit. After returning to Earth NASA's Orion spacecraft is seen from an unpiloted aircraft descending under three massive red and white main parachutes and then shortly after its bullseye splashdown in the Pacific Ocean, 600 miles southwest of San Diego. During the uncrewed test, Orion traveled twice through the Van Allen belt, where it experienced periods of intense radiation, and reached an altitude of 3,600 miles above Earth. The spacecraft hit speeds of 20,000 mph and weathered temperatures approaching 4,000 degrees Fahrenheit as it entered Earth's atmosphere.

NASA’s Orion spacecraft launched successfully atop a United Launch Alliance Delta IV Heavy rocket Dec. 5 at 7:05 a.m. EST from Space Launch Complex 37 at Cape Canaveral Air Force Station in Florida. Orion’s Exploration Flight Test-1 (EFT-1), is the first flight test for NASA’s new deep space capsule and is a critical step on NASA's journey to Mars. The 4.5 hour flight is scheduled to conclude with the splashdown of Orion in the Pacific Ocean.


May this mission indeed be a new dawn of U.S. crewed spaceflight and not, as I feared at Greer's blog, a sunset.