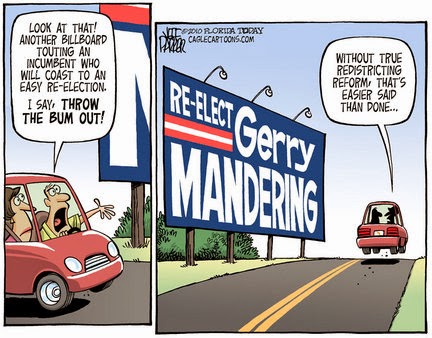 I concluded WXYZ previews marijuana legalization for the 2016 ballot by writing "WXYZ also looked at redistricting reform in the same newscast.  Stay tuned for an entry about that tomorrow."  Here it is, Push to have nonpartisan committees draw district lines in Michigan.

There's a movement in Michigan right now to change the way our state is redistricted.

Jeremy Moss is my district's Representative in Lansing and efforts like this make my glad he is.  As to whether his bill will get anywhere in the legislature, I have my strong doubts.  In that case, his plan B of taking to the people for a vote is much more likely to happen.  I hope it succeeds.

This video reminds me that I wrote about redistricting during the first month of this blog.


Remember what I wrote in my first post on this blog:


One of the common themes of this blog will be explaining how global, national, and local events and politics are about various factions fighting to maintain their shares of a shrinking pie--one they openly deny is shrinking. Once you recognize that's what's going on, a lot of mystifying events become much more understandable.

Redistricting is one of the prime examples of what I'm talking about, and the most obvious. It's going to be especially true here in Michigan. Expect a lot of posts about redistricting in the near future, some of them as part of my series on the 2010 Census.

I followed up four times on that promise, twice in June 2011, again in June 2012, and one last time in a footnote to May 2013.  I still need to follow up that footnote.  In the meantime, I'm enjoying seeing a topic I care about return and possibly be resolved in a manner I approve of.  Stay tuned to see if Moss's measure ends up on the ballot in 2016.
Posted by Pinku-Sensei at 12:34 AM