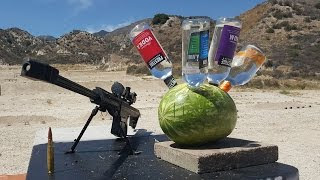 I hinted about my planned topic for tonight by writing "I'll be back" in two entries--"Terminator: Genisys."  After looking at the weekend box office report from Variety, I realized that I'm not feeling it.  True, two movies warning us of the limits of our technologies, the fifth "Terminator" film and "Jurassic World" placed third and second at the domestic box office, but I'm not up to saying more about that juxtaposition today.

Tonight was also the season finale of "Penny Dreadful."  Even though I promised an entry for the show I jokingly call "James Bond, Vampire Hunter," tonight isn't it, as I haven't watched any of this season's episodes yet.  When I do, I will post the entry it deserves.  I will report the good news about the series: it's been renewed for a third season.  Yay!  I now have two seasons to look forward to!

Instead, I'm going to follow up on a comment in Drink recipes for July 4th from Tipsy Bartender.

Both guns, the shotgun and the .50 caliber rifle, play central roles in two other videos.  Each clip also ties into TV shows, so I might feature them in a future Sunday entertainment entry.

Follow over the jump for one of those along with the drink recipe for "Insidious, Chapter 3" I promised in the Jurassic World entries as well as a drink for Fifty Shades of Grey.

Only one of the videos is still up, 50 cal meets Vodka Watermelon.

We go to the range for this one homeboy!! A 50 CAL MEETS OUR VODKA WATERMELON! Why? CAUSE THIS IS AMERICA DAMMIT!!!
...
RECIPE
=======
Large Watermelon
Bottle of Vodka
Bottle of Rum
Bottle of Gin
Bottle of Tequila
Bottle of Triple Sec

*Allow bottles to sit inside watermelon for 24 hours to allow the booze to seep in.

As for the connection to a TV show, I'll be a good environmentalist and recycle.

Hey, Skyy, you look like R. Lee Ermey on Mail Call here. He loved to destroy watermelons with the weapons on the show. It's been a while since I watched one of his episodes, so I don't recall any one of the watermelons on his show passing the Farm Film Report test (it blowed up real good) with such flying colors at the one you shot here.

That took care of the rifle.  Skyy used the shotgun in a zombie apocalypse skit that advertised T-shirts for his channel.  It ended up being cute and funny, not scary.  Unfortunately, the sale is now over and he either took the video down or made it private.  Darn.  It could have used to for the season premieres of "Z Nation" and "The Walking Dead."

Now that I've dispensed with the guns, it's time for the recipe for "Insidious, Chapter 3."  I present The Black Bride Shot.

This freaky shot is based on the new horror flick Insidious: Chapter 3... BLACK BRIDE!! A shot only our girl Meghan can handle!
...
THE BLACK BRIDE SHOT
Black Vodka
Grenadine
Cherry Jello
Red Absinthe

Meghan has more ghost stories in the outtakes.  I'll save that for Halloween.

Finally, here's the recipe for The 50 Shades of Grey Cocktail.

Once again, Skyy forgets to post the detailed instructions when he's working with Brittany.  The horseplay and roleplay take over the video and extend to the description.  Oh, and if you thought that video got kinky fast, watch the outtakes.  Wow!

That's it for the Sunday entertainment entry.  I hope my readers enjoyed their meal of leftovers.