'Game of Thrones' already a big winner at the Emmy Awards 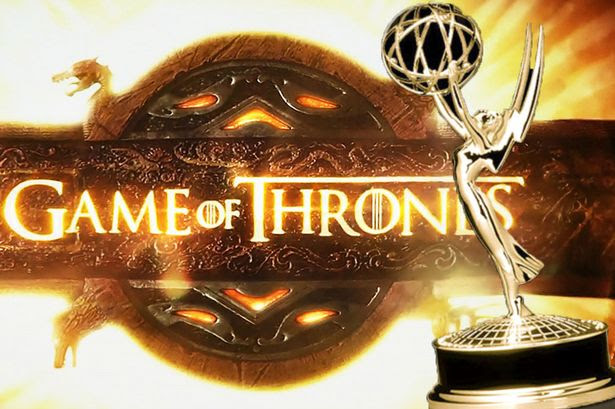 
HBO wins big with 29 awards including eight from 'Game of Thrones' while NBC follows with 11 gongs including four from 'SNL' 40th anniversary special.

Here are the fantasy series' wins:
The other big winner at the Creative Arts Emmy Awards was "American Horror Story: Freak Show" with five trophies for FX:
Unfortunately, that was pretty much it for live-action speculative fiction last Sunday night.  Both "Penny Dreadful" and "The Walking Dead" were shut out; two of the latter's nominations went either to "Game of Thrones" (stunts and sound editing) and two to "American Horror Story" (special effects and makeup) while Penny Dreadful's categories went to "American Horror Story" (makeup), "Transparent" (theme music), and "House of Cards" (music composition).  The closest "The Walking Dead" got was Chris Hardwick, who hosts "Talking Dead," winning Social TV Experience for "@Midnight."  At least I can be happy for Chris, who deserves an award for his work somewhere.

The only other other Speculative Fiction show that won an award was "Adventure Time," which was crowned "Outstanding Short-Form Animated Program."  Good choice, but otherwise nothing.  I'll have to wait until tomorrow night to see if "Game of Thrones" wins its seven remaining categories, "American Horror Story" wins its remaining four, and "Last Man on Earth" wins any of its three.  That's pretty much it for SF tomorrow.

Follow over the jump for my comments on winners in other genres.

On the silly side, Katy Perry's Super Bowl Halftime show won for "Outstanding Costumes for a Variety Program or Special."  I had no idea I was watching something that excellent at the time!

As for the rest of the categories, Prime Time on YouTube presents the highlights in Creative Arts Emmy Awards 2015.

While I was rooting for Michael J. Fox to win Outstanding Actor in a Guest Role for his work in "The Good Wife," I'm not unhappy that someone from "House of Cards" did instead.  The same for the Guest Actress winner from "The Americans."  All three are at the intersection of politics and crime, and all three are outstanding shows that my wife and I have watched and will watch again.

Stay tuned for another post about tonight's awards program in which I plan to follow up on the shows and performers I listed as my favorites in 2015 Critics' Choice Awards, Speculative Fiction, Politics, Crime, and History.  Here's hoping at least some of them win.
Posted by Pinku-Sensei at 12:00 AM