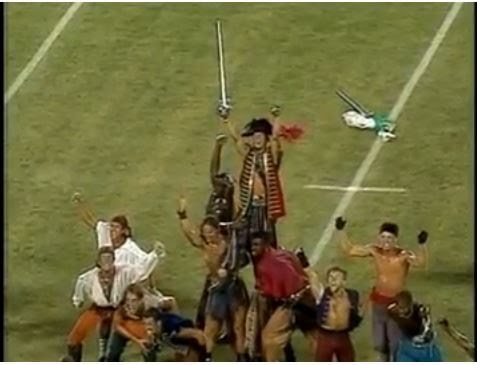 Ahoy, me hearties! September the 19th be International Talk Like a Pirate Day. We've pillaged the DCI video archive on this occasion and wish you all to take part in our booty—a clip of the Madison Scouts shanty from nineteen-hundred and ninety-seven, "The Pirates of Lake Mendota." Yo-ho-ho!

I covered this show 18 years ago.  Here's the relevant excerpt of Vince's Review of Port Huron Show for Drum Corps World along with my commentary in italics.


While they may be judged for a mere eleven and a half minutes, the Madison Scouts began their performance as soon as they marched onto the track and ended it only when the last member disappeared behind the back stands.  The corps held the crowd in the palm of its hand from the beginning of the company front entrance into the fleur-de-lis and neverlet it go.  Even during the warm-up, during which the corps marched into the opening set, the guard was acting out its parts, particularly one gentleman who strode slowly but purposefully from the left front corner of the field to the front of the "ship".  Then the show proper began, with the pirates--oops, guard (yes, they play their roles that convincingly)--storming the "ship", stealing the show during its opening minute from the musicians.  This was almost a shame, as the brass played with tremendous proficiency and showmanship, the percussion tackled a flashy and challenging rudimental book with great precision and flair, and all the musicians marched an engrossing drill, complete with braking waves, with immense poise and control.  However, the guard was a treat to observe, especially during four parts of the show.  First came the drunken sailor sequence, complete with an inebriated runt trying to pick a fight with a much larger man, which the fans found extremely amusing.  Then, there was a rifle-saber exchange.  Two moments came during the final selection.  First, the guard moved from stage left to front and center to perform some swashbuckling equipment work.  Then there was the mutiny sequence at the very end, complete with a swordfight on top of the rotating percussion stand and a duel to the death between Captain Zak Schwartz and a usurper. The audience gave the new captain and the company front that he led a standing ovation, which barely ended before the most enthusiastic standing ovation of the night as the Scouts concluded the judged portion of their performance.

(Steve Burstall pointed out the full performance from entering to exiting the stadium.  The looting of Zak, who is a student from Eastern Michigan University, was something, as was his being carried off by the last marching member.)

As you can tell, I really enjoyed this performance.  It helped that I knew one of the performers, so I could give the review a personal touch.

This is the third consecutive drum corps entry that has featured the Madison Scouts, the previous two being Fandoms collide as a drum corps plays anime music and A drum corps Stars and Stripes for the 4th of July.  Let's see if I can continue the streak for the next drum corps holiday.

Follow over the jump for a bonus video of another drum corps performing a pirate show.

Those of my readers who clicked on "read more" is an unauthorized video of Magic of Orlando 2004 Pirates of the Caribbean.  Just as I have three of the past five years, I couldn't leave Jack Sparrow and his movies alone for today.

Enjoy it while it lasts.  I'm sure this video will be taken down soon, which is why I asked Drum Corps International to post an official clip of this show for today.  That would would stick around, maybe even longer than drum corps itself.  As I've written before, I'm not optimistic about how long that might be.

Stay tuned for Entertainment Sunday, which will feature the Emmy Awards.
Posted by Pinku-Sensei at 12:04 PM