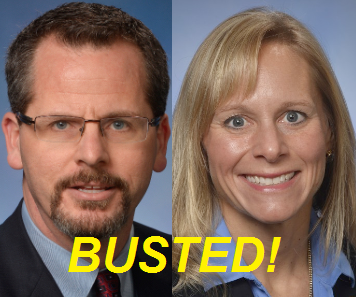 In Quatloos for "dinghy lovebirds" Gamrat and Courser, I attempted to make a wager with my readers by asking "how many quatloos are people willing to wager that one or both end up expelled?"  No one took me up on it.  Too bad, as I would have made some money off of it, even if it was in a fictional denomination.  WXYZ reported this morning Todd Courser resigns, Cindy Gamrat expelled.

Text story accompanying this video is at the WXYZ website.

By the way, Courser's problems aren't over, even if he is out of the legislature.  WXYZ also reported Judge demands AT&T records of Courser blackmail phone.

A judge has issued a warrant for AT&T records of the phone that reportedly sent blackmail messages to Todd Courser.

Looks like Courser, at least, is in for more legal trouble.  As I wrote, incompetent, corrupt asses.
Posted by Pinku-Sensei at 8:31 AM