Vox on the decline of cursive

Two years ago, I posted The collapse of cursive, an entry that produced my favorite comment on this blog, at least as of last year (I've been getting a lot of good ones lately).  Today, I'm inspired both by this month's theme of lessons and following video by Vox to revisit the topic: Cursive handwriting is dying. But some politicians refuse to accept it.

Eleven US states have either passed laws or amended the Common Core curriculum to require teachers to cover cursive handwriting in elementary schools. This came in response to the Common Core standards, released in 2010, which require keyboarding skills, but do not mention handwriting or cursive specifically. Advocates for cursive instruction worry that kids will not be able to read founding documents like the Constitution or the Declaration of Independence if they don't learn cursive. But it appears that they are fighting the inevitable.

My answer to the question posed in the first image is that cursive is dying, but it's not dead yet.  After all... 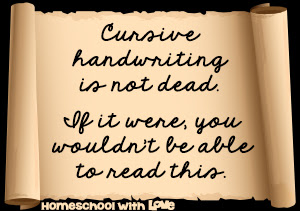