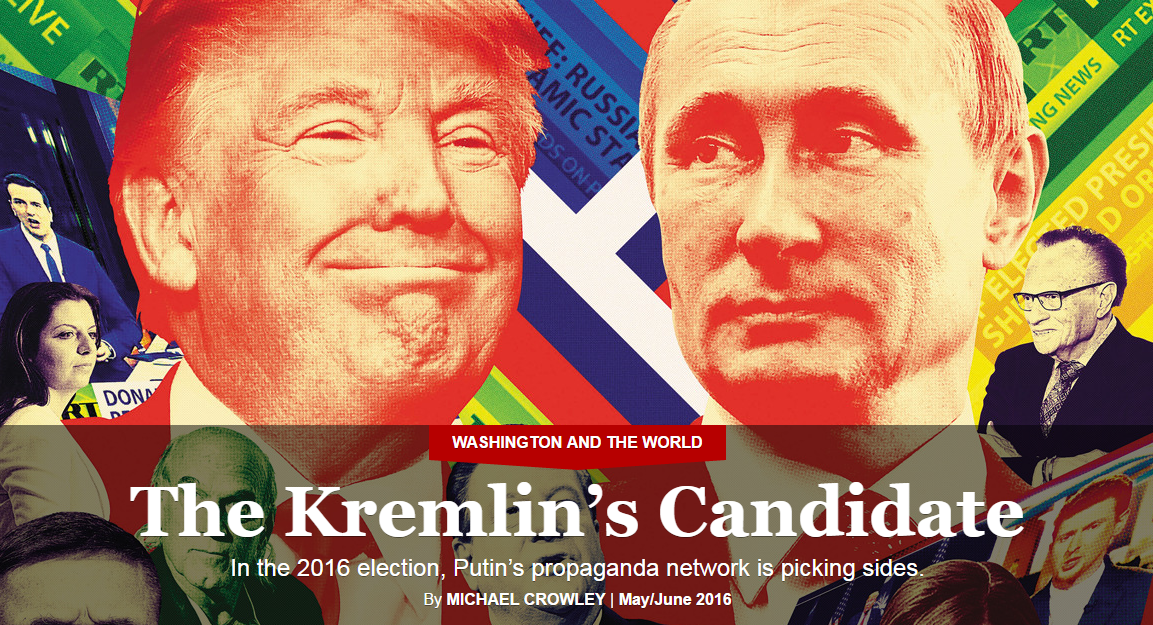 In July, I joked about Trump and Putin, a bad bromance.  On Monday, I showed that I had become more alarmed about Trump's admiration of Putin in Trump threatens to 'Lock Her Up!'  That entry featured a Keith Olbermann video from GQ in which Keith said that Donald Trump was borrowing a page from the Putin playbook by promising that, if he became president, he investigate, prosecute, and attempt to imprison Hillary Clinton.  That Paul Manfort, who was Trump's campaign manager, had earlier been Viktor Yanukovych's campaign manager for President of Ukraine, made the Trump-Putin connection more real and the threat more chilling, as Manafort's candidate was also supported by Putin and locked up his female opponent Yulia Tymoshenko after he was elected.

It turns out that wasn't the first time Keith had pointed out the perils of Putin's possible influence in Trump's campaign.  Two weeks earlier, he had explained Why Donald Trump’s Russian Connection is a Huuuge Problem.

It’s time for answers: What exactly is Donald Trump doing with—and for—Putin and the Russian government?

This week, Keith harkened back to this earlier video and got some answers to his questions in Looks Like Trump is Now Peddling Russian Propaganda.

It’s a good thing the fools trying to subvert our democracy are, you know, fools.

I agree with Keith; it's a good thing for American democracy that Putin's patsies in the Trump campaign are incompetent.  Otherwise, we'd all be in real trouble.
Posted by Pinku-Sensei at 3:29 PM