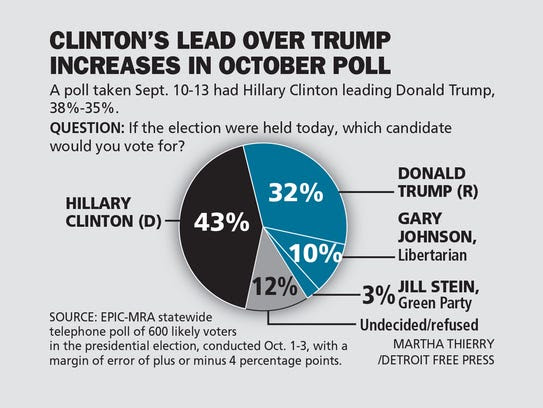 Last month, the polling news read Clinton lead over Trump shrinking in Michigan.  Eep!  This month, actually yesterday, the same poll gave Clinton an 11% lead over Trump in a four-way poll including both Johnson and Stein.  WXYZ has the story in Clinton leads Trump in new Presidential poll.

The Detroit Free Press explains how Clinton's lead built back up among key demographic groups in the follow passage from Poll: Clinton takes 11-point lead over Trump in Michigan.

[The previous poll showed] Clinton’s support among black voters in Michigan dropped to 74% —  far below the 95% of support the last Democratic nominee, Obama, got in the last election — and 14% undecided. But this poll showed 86% of black voters supporting her and Trump getting no more than 2% of that vote, despite his outreach in visits to Detroit and Flint. Only 5% of African-American voters remained undecided, the poll said.

Trump’s chances of winning in Michigan and elsewhere are further hurt by an inability to attract more support from white people, as well: The poll indicated that Clinton was essentially tied among whites, with her leading 37%-36, compared to 11% for Johnson and 13% undecided. In the last election, exit polls showed Republican nominee Mitt Romney beating Obama among whites in Michigan by 11 percentage points — and still losing by 9 percentage points overall in the state

Three weeks ago, Trump also had taken a clear step toward neutralizing the gender gap facing his campaign, taking a 5-percentage-point lead among men in Michigan and cutting Clinton’s clear lead among women to 10 percentage points.

In this poll, however —  following Clinton’s debate where she blasted Trump for calling 1996 Miss Universe Alicia Machado “Miss Piggy” and “Miss Housekeeping” —  Clinton had staked a 20-percentage-point margin with women — 48%-28% among the biggest single voting bloc in the state. She has continued to raise issues of Trump criticizing women over their looks on the campaign trail.

And while Clinton had seen a decline in support among voters ages 18-34   in the last Michigan poll, she’s now back where she was with them post-convention, with a 44%-22% lead over Trump and Johnson getting 21%. Clinton also held leads among every other age demographic. In vote-rich metro Detroit, Clinton’s support was back over 50%: She led Trump in Wayne, Oakland and Macomb counties as a bloc by 55%-25%, though Trump still held leads in central, west and northern Michigan.

Trump had been expected to do best with voters with a high school diploma or less education, but after he held a 4-percentage-point edge with those voters last month, Clinton is now ahead. She  had regained a clear lead, 41%-32%. She also reclaimed a lead among self-described independent voters, 27%-24%, though what may be most significant about that group is that their number of undecideds jumped from 20% to 31%; and their support for Johnson dropped, from 23% to 14%, as the third-party nominee had difficulties identifying the war-torn city of Aleppo in Syria and answering a question about foreign leaders.

All good news.  As a result, FiveThirtyEight now lists Clinton's odds of winning Michigan at 86.2%, much higher than the 71.4% probability early in September, although not as good as 93% in August.  Here's to her chances improving!
Posted by Pinku-Sensei at 12:00 AM