Newspaper endorsements roll in while comedians laugh at Gary Johnson 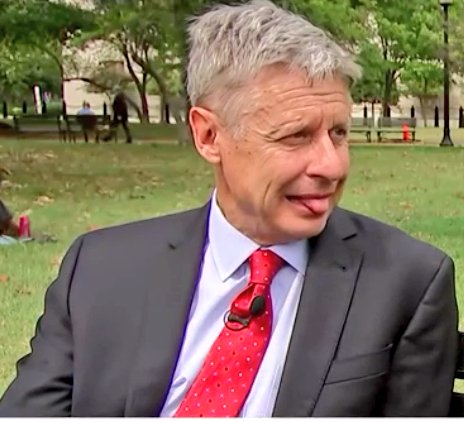 I wrote 2016 could be a good year for minor party candidates and then made a prediction of what that would most likely look like.


FiveThirtyEight asked Could An Independent Candidate Succeed In 2016?  Of all the answers to the question, I agreed most with Harry Enten, who said "this year pretty much meets all the criteria for at least a moderately successful third-party candidacy."  For me, that means that the Libertarians and possibly the Greens could reach the threshold of five percent of the popular vote to qualify for public financing in 2020.  The Constitution Party does not have ballot access in enough states to meet that criterion.  It's very unlikely that even one of the minor parties will qualify for the debates with the major party candidates.  As Gary Johnson pointed out, that requires fifteen percent in several polls before the debates.   While minor parties have earned Electoral College votes before, that happened when they had concentrated regional strength, such as the Dixiecrats and the American Independent Party, and could win pluralities in three-party contests.  Neither the Libertarians nor the Greens meet that criterion; their support is more diffuse.  Consequently, none of the minor parties will win the presidency, but they'll certainly overperform compared to any election since 2000 and possibly even 1996, but not 1992.  None of these candidates is Ross Perot.  Even he didn't win any Electoral College votes.

So far, those predictions are panning out.  First, Johnson did not get into the debates, as he did not get 15% in the polls in time.  Second, as of today, FiveThirtyEight projects Johnson will earn 7.6% of the vote in November.  That would be the best showing for a minor party candidate since Perot in 1996, but not better; Perot earned 8.4% in that election.  As I wrote, Johnson is not Perot.  Third, FiveThirtyEight is also predicting only a 2.9% probability that Johnson will earn any electoral votes, most likely in his home state of New Mexico.  My forecast, as far as it went, is coming true.  That written, there are two results of Johnson's success that I didn't foresee, the newspaper endorsements and the comedic reaction.


“We would rather recommend a principled candidate for president — regardless of his or her prospects for victory — than suggest that voters cast ballots for such disappointing major-party candidates,” the editorial board wrote.

“We reject the cliche that a citizen who chooses a principled third-party candidate is squandering his or her vote,” the endorsement continued. “…We offer this endorsement to encourage voters who want to feel comfortable with their choice. Who want to vote for someone they can admire.”
...
It’s the fifth newspaper endorsement that Johnson, who is polling in the single digits, has received from traditionally right-leaning editorial boards. On Thursday, The Detroit News, which has until this year always endorsed Republican candidates for the presidency, endorsed Johnson. The Libertarian candidate also has received endorsements from the New Hampshire Union-Leader, the Richmond Times-Dispatch and the Winston-Salem Journal.

In contrast, the closest Trump has to a major metropolitain newspaper endorsement comes from the New York Post.  Five endorsements to maybe one.  That's not a result I would have expected, even from the Detroit News.  Speaking of which, WXYZ reported on Detroit News endorses Libertarian Gary Johnson for president.  Roll video!


Get used to that clip.  It will show up again and again over the jump as Stephen Colbert, Seth Meyers, Bill Maher, and Sarah Silverman laugh at Johnson.

I also didn't expect the attention from late-night television comics to Johnson's visibility, but I should have.  The Libertarian candidate was the subject of three segments from three comedians last week, beginning with Stephen Colbert mocking him in Gary Johnson Is Running His Own Campaign Into The Ground.

Why are young people flocking to Gary Johnson's presidential campaign? Perhaps it's his plan to combat global warming, or his tongue-in-cheek debate strategy.

Seth Meyers even mentioned Gary Johnson's Gaffe in A Closer Look at the campaign last week giving him equal treatment with Trump and Clinton.

Bill welcomes comedian Sarah Silverman to the panel for a discussion about how voters hoping that third party candidate Gary Johnson will take up the mantle of Bernie Sanders are sadly - and dangerously - mistaken.

All this derision is actually a good sign.  Johnson has enough visibility and name recognition that he's worth making fun of.  That's what success for a minor party candidate looks like and why last week was actually a good week for Johnson.
Posted by Pinku-Sensei at 9:14 AM