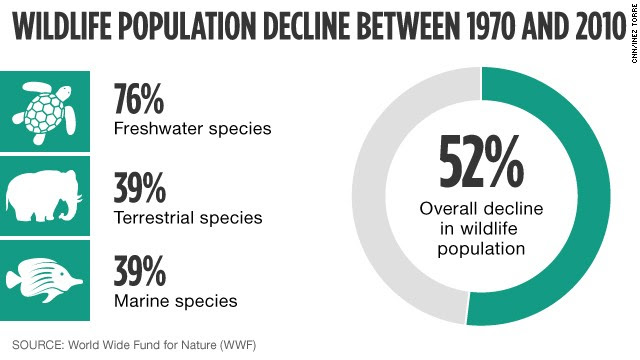 Yesterday's story about Trump's star on Hollywood Walk of Fame demolished upset me.  Somehow it hit a little close to home, pun intended.*  That written, I'm not in one of my "I can't be all DOOM all the time" moods, so I'm posting today about something even more depressing, if less personally threatening -- the loss of wildlife populations.  Take it away, Euronews!

By 2020 the earth's population of mammals, birds, fish and invertebrate species will have declined by more than 60% since 1970, putting the world on course for the first mass extinction of animal life since the dinosaurs.

Note that this is a massive loss of individuals, not of species; 60% of the planet's animal biodiversity will not disappear in the next four years.  Still, it is concerning and if it doesn't stop, extinctions will follow.  One of those might be of the Irrawady Dolphin, one population of which was just declared functionally extinct, as Newsy reports.

Nets and other fishing gear are so dangerous to dolphins that the Irrawaddy dolphin is functionally extinct.

Now I am in "I can't be all DOOM all the time" mood, so it's time to post a positive wildlife story.  CNN reports California wants its grizzly bears back.

The animal is on its state flag, but California hasn't seen a grizzly since the 1920s. Now some want to bring the bear back, CNN's Dan Simon reports.

I had this idea when I was a kid, but of course it went nowhere, so I'm glad to see that someone else has brought it back and made people take the proposal seriously.  That makes me feel better already.

*I grew up in Los Angeles, did my M.S. research in the shadow of Hollywood, and write a lot about entertainment on this blog, so my reaction shouldn't come as a surprise to my readers.
Posted by Pinku-Sensei at 1:55 PM