For entertainment Sunday, I'm going to approach the ongoing creepy clown hysteria sideways instead of head-on by suggesting drink recipes honoring the most famous criminal clowns in modern pop culture, The Joker and Harley Quinn.*

I begin with my usual go-to for drink recipes, Tipsy Bartender, with their recipes for the Clown Prince of Crime and his Princess to mark the release of "Suicide Squad" earlier this year: Suicide Squad Shots.

Skyy wasn't the only one thinking up drinks for these characters in this movie.**  Follow over the jump for more.

Delish has its own recipes for Suicide Squad Shots.  First Harley Quinn.

Shout out to the Harley Quinn fans! This shot's sweet-yet-tart, just like the star of the movie.

DIRECTIONS
1. Use a lemon wedge to dampen the rim of each shot glass, then dip into a shallow dish of sanding sugar, so the rim is coated entirely. Set glasses aside.

2. Pour Gatorade and vodka in a cocktail shaker or pitcher filled with ice. Shake (or stir, if using a pitcher) and pour the mixture into each shot glass. Top each with a splash of cranberry juice, and pop in the rock candy stick, for garnish.

This shot will bring out your inner prankster with its fizzy secret ingredient. Make the joker to celebrate the new movie!

1. Mix even parts Midori and vodka. Pour into shot glasses.

2. Sprinkle Pop Rocks into each glass just before serving.

Mix even parts Midori and vodka. Pour into shot glasses.
Sprinkle Pop Rocks into each glass just before serving.

DrunkenFandom.com, a site I'm surprised I haven't run into until now, has its own Harley Quinn cocktail. 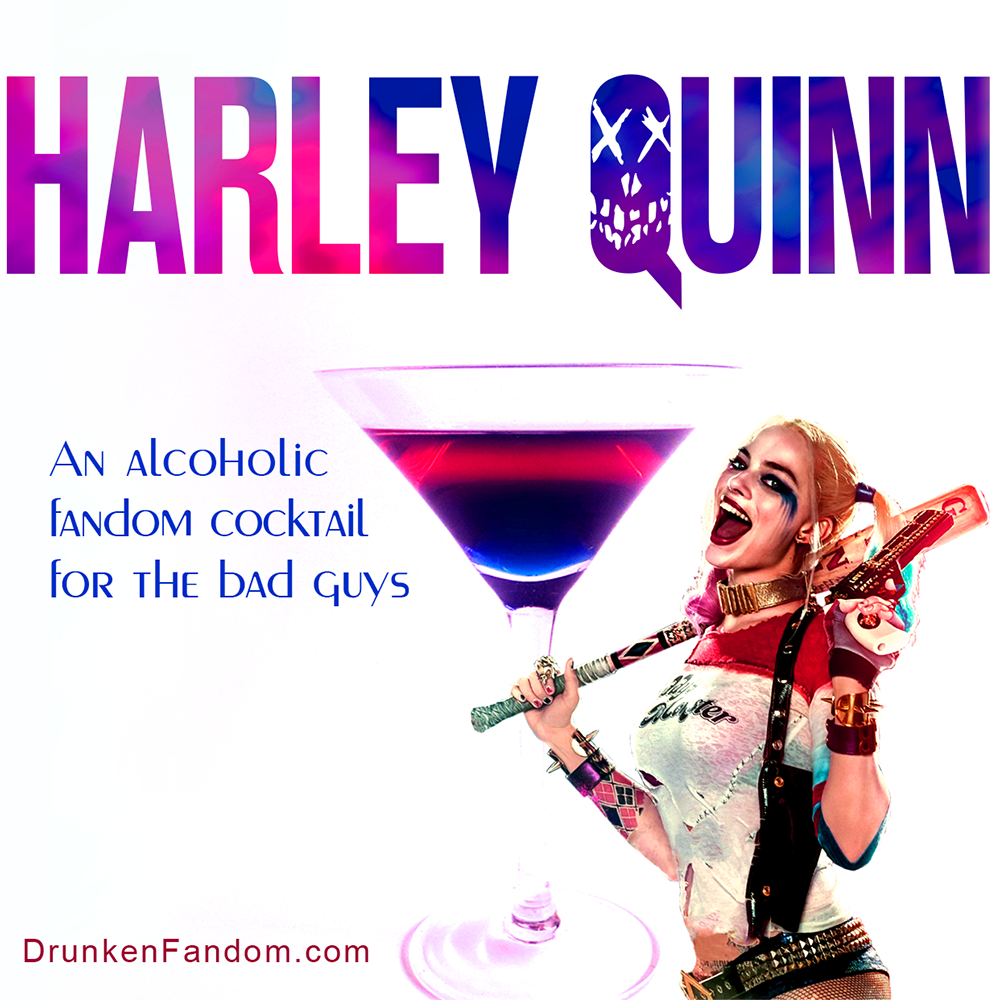 Finally, here are two of the drinks I featured at the top of the post from All Mommy Wants.  Again, ladies first with The Harley Quinn.

Pour your 1 cup of sugar into the ziplock bag add your 2 drops of black food coloring
Using your hands rub the food coloring into the sugar until fully colored black
Cocktail:

In a bar shaker add 3-4 pieces of ice, vodka, tequila, rum and grenadine — shake well to combine
Top off with pineapple juice
Enjoy!

Pour your 1 cup of sugar into the ziplock bag add your 2 drops of purple food coloring
Using your hands rub the food coloring into the sugar until fully colored purple
Decorating the glass:

Use 2 appetizer plates pour 2 Tbsp. of simple syrup onto the plate
On the other plate add the purple saddening sugar
Dip your glasses into the simple syrup and then the sanding sugar – set to the side for 5 minutes to dry
Fill your glass 3/4 of the way with ice
Cocktail:

In a large bar shaker add your liquors shake well to mix
Pour your liquors into your glass and top with sweet and sour mix
Enjoy!

That's quite enough drinks honoring criminal clowns for today.  Reality tomorrow (or tonight if one wants drinks and drinking games for Donald Trump and Hillary Clinton to accompany tonight's presidential debate) and zombies next week as "The Walking Dead" returns.  Poor Rick and his crew have no idea how weird things are going to get!

*I might get around to examining the phenomenon more seriously later, including the clown sightings and actual crimes reported here in Detroit.  This time Insane Clown Posse has nothing to do with it!

**This is only the second time I've mentioned "Suicide Squad" in this blog.  The first was Speculative fiction movie nominees at the 2016 Teen Choice Awards, Part 2, where I predicted that "Suicide Squad" would sweep the "AnTEENcipated" categories.  I came close, as it won two of three, Choice AnTEENcipated Move Movie and Choice AnTEENcipated Actress for Cara Delevingne (not Margot Robbie, who I'd have picked).  As for Skyy thinking it was better than "Deadpool," he's entitled to his opinion, but the annual box office so far has "Deadpool" in fifth at the domestic box office while "Suicide Squad" is in eighth, $40 million behind.
Posted by Pinku-Sensei at 1:21 PM