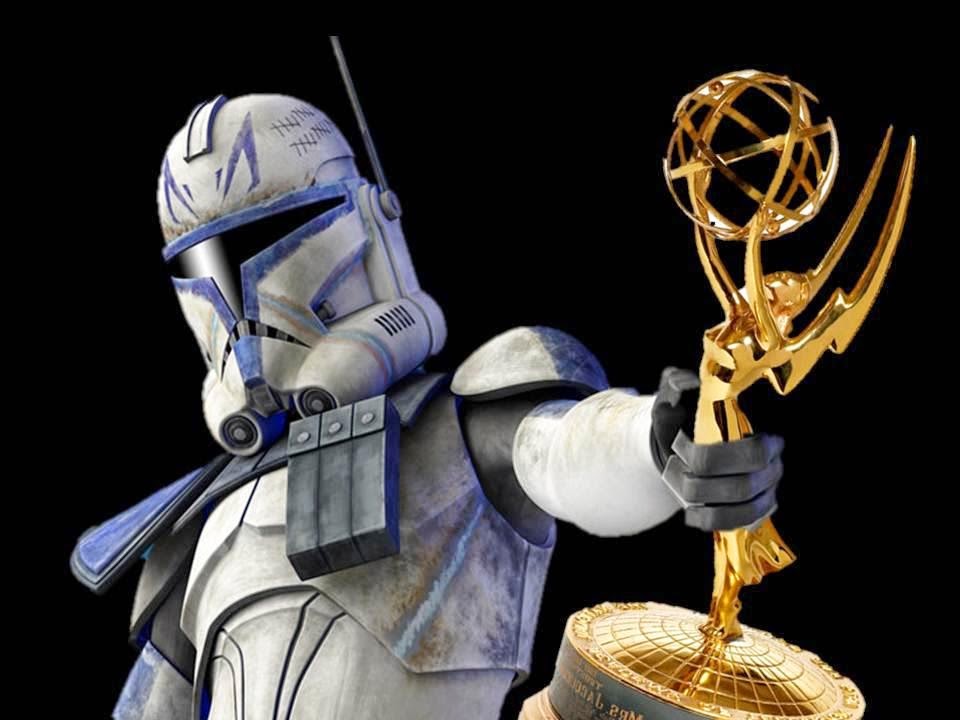 While "Westworld," "Stranger Things" and "The Handmaid's Tale" made news with multiple Emmy nominations for drama series, one science fiction franchise better known for its presence on the big screen was also earning nominations for its work on the small screen and second screen -- "Star Wars."  The small screen nominee was "Star Wars Rebels," which I last blogged about when it won Best Animated TV Series at the 2017 Saturn Awards.  However, it wasn't nominated for Outstanding Animated Program.  Instead, it was the one animated nominee in another category.

This is the first Emmy nomination for the series and I'm rooting for it.  However, it is up against the Macy's Thanksgiving Day Parade, which I've mentioned several times.  The band geek in me is torn.  That written, I'm not optimistic, as "School of Rock" was nominated last year in this category and "Girl Meets World" has been nominated three years in a row.  I would consider both to be favorites except that they're competing against a Sesame Street special.  All things being equal, the Muppets will probably win.

The second screen nominee is "The Star Wars Show" on YouTube.  It was nominated in a category that has only existed for two years.

I am more optimistic about "The Star Wars Show" winning this category than "Star Wars Rebels" winning its.  For starters, only one nominee, "Honest Trailers," is returning.  Second, it has Disney and the power of the Star Wars franchise behind it.

Tangentially related to Star Wars, the late Carrie Fisher was nominated for Guest Actress in a Comedy Series for her appearance in "Catastrophe" and "Bright Lights: Starring Carrie Fisher and Debbie Reynolds" was nominated for Directing for a Nonfiction Program and Documentary Filmmaking, where it's competing against "Planet Earth II."

To conclude this entry, I found the most recent instance where the two Star Wars nominees crossed paths, Star Wars Rebels Coming to Celebration Orlando and the Best Star Wars Video Games with Xavier Woods on "The Star Wars Show."

In this installment of The Star Wars Show, we reveal first details on the Star Wars Rebels panel at Celebration Orlando, look at new Celebration droid exclusives from Kotobukiya, chat with WWE's Xavier Woods, visit the Rogue One set for a look at the film's droids, and much more!

May the Force be with the nominees!
Posted by Pinku-Sensei at 1:58 AM