"13th" vs. "O.J.: Made in America" plus other non-fiction political programs nominated at the Primetime Emmy Awards 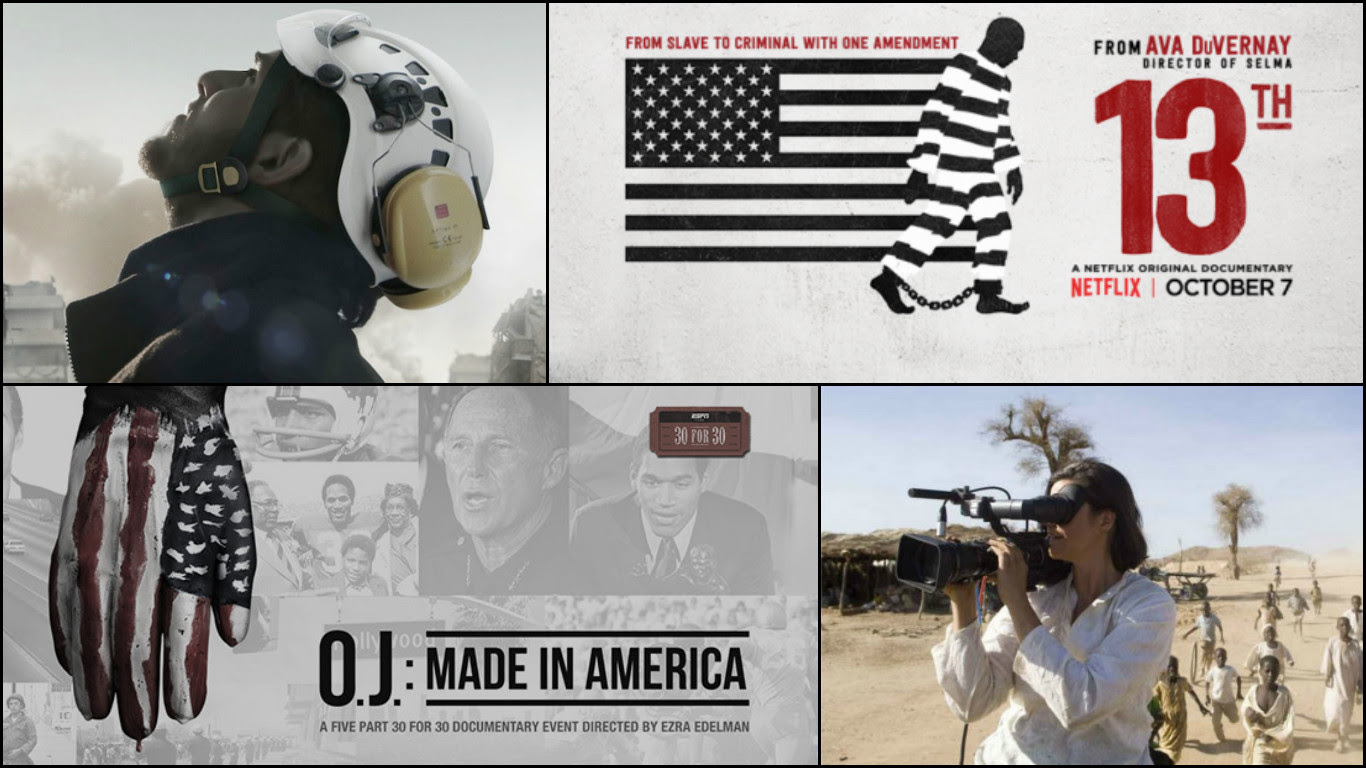 I told my readers to "Stay tuned for more posts of mine on the best in political television throughout the week" at the end of Part II of When did speculative fiction go 'mainstream'? When SF novels became best-sellers.  It's time to resume the series that began with Lots of politics in nonfiction television at the 2017 Television Critics Awards and continued with Religion and politics at the 2017 Television Critics Association Awards as 'The Handmaid's Tale' wins two awards and 'Love Has No Labels' and 'Women's March' among 2017 Emmy nominations for Outstanding Commercial with this bit of foreshadowing from Nature and science at the Primetime Emmy Awards.

Both of the leading nominated political non-fiction shows are about the politics of race relations in America.  They're not alone, as "United Shades of America" along with two shows about the 25th Anniversary of the L.A. Riots and another about the Obamas also appear among the nominees.  Given the racial motivation for the violence in Charlottesville, that remains an important topic.

Follow over the jump for the political nominees in non-fiction television at the Primetime Emmy Awards.

I begin with those categories in which both "O.J: Made in America" and "13th" are nominees and either or both "Planet Earth II" and “Bright Lights: Starring Carrie Fisher and Debbie Reynolds” are also nominated.  Here's one that has all of them and no other nominees.


Directing for a Nonfiction Program

On two criteria, most nominations in this awards show (8 for “13th” in contrast to 6 for “O.J.: Made in America”) and track record of the nominee, I think Ava DuVernay is going to win, even though Ezra Edelman directed the actual Oscar winner for Feature Length Documentary and "Planet Earth II" has 2 more nominations overall; I think it might have its votes split in this category.


Cinematography for a Nonfiction Program

This is a very tough field.  Anthony Bourdain's food and travel show has been nominated multiple times and even won once.  “O.J.: Made In America” is an Oscar winner.  "13th" has more nominations.  Finally, the BBC Earth team are masters at their craft.  I personally am cheering for "Cities" to win.


Picture Editing for a Nonfiction Program

Tough competition.  I wouldn't be surprised if any one of them wins, including "Eight Days A Week."


Sound Mixing For a Nonfiction Program (Single or Multi-Camera)

This is the last category in which "13th" and "O.J.: Made in America" compete head-to-head and "Planet Earth II" and "Anthony Bourdain Parts Unknown" are right there with them.  I'd give a slight advantage to "Eight Days A Week," which is a music documentary, but any one of them could win.  Again, I'm rooting for "Planet Earth II."

"O.J.: Made in America" isn't here, but it was replaced by another worthy show, "Leah Remini: Scientology and the Aftermath," which won Outstanding Achievement In Reality Programming at the Television Critics Association Awards.  I think "13th" has a good shot and "Eight Days A Week" a better one, but I'm still rooting for "Planet Earth II."


Writing for a Nonfiction Program

Without "Planet Earth II" in the mix, I think "13th" is the favorite, even though I'm rooting for "Bill Nye Saves the World," even though I don't think it deserves it.

"13th" is the clear favorite, given the reputation and quality of the director and the urgency of the movie's topic, but any of these shows could win.

"O.J.: Made In America" is the favorite as it won the Oscar for feature length documentary, but it has worthy competition in "The White Helmets," which is also an Oscar winner for Best Documentary Short Subject.  However, I wouldn't be surprised if "Bright Lights: Starring Carrie Fisher and Debbie Reynolds" pulled off an upset.  It's a Hollywood story that Hollywood people like and so they might vote for it.  I hope not.  I'd rather see "LA 92" pull off the upset.

The political show here is "United Shades of America," which examines race relations in America with a light touch.  However, I doubt it will win.  "Deadliest Catch" has won twice and "Born This Way" is the returning winner.  I watch "Deadliest Catch" occasionally, as it has a nature aspect, but "Born This Way" makes its own subtle political point, so I would be O.K. with it repeating.


Host for a Reality/Reality-Competition Program

RuPaul Charles is the defending winner and I think he's the favorite.  W. Kamau Bell should just be happy to be nominated.  If Alec Baldwin wins this category, it would be an injustice.  He can earn his Emmy for portraying Donald Trump on Saturday Night Live; that shouldn't bleed over here.

I also foreshadowed today's post in More nature and science at the Primetime Emmy Awards.


I'll have more to say about the rest of the nominees in the final category [Outstanding Original Interactive Program, a new category] in a future entry, as two of them are nonfiction political shows.  Until then, stay tuned.

Thank you for staying tuned.

The political shows are “Hitrecord x ACLU: Are You There Democracy? It’s Me, The Internet” and “The People’s House – Inside the White House With Barack and Michelle Obama.”  Between the two, I'd root for the Obamas, but I suspect "Dear Angelica" will win instead.


Creative Achievement in Interactive Media Within an Unscripted Program

The political show is “Stand For Rights: A Benefit for the ACLU with Tom Hanks,” but I think either "The Oscars: All Access" or "Stand Up to Cancer" will win, the first because it is a show about Hollywood and the second because it's about a cause that Hollywood likes.  Yes, I'm cynical, but I grew up around Hollywood people.  I might have more to say about that later.

"Viceland at the Women's March" is the political program, but "United States of Arts" also fits the theme, as it was produced by the government.  I'm also counting "Creating Saturday Night Live," as the parent program can be very political and I'm examining it in a future entry.  Speaking of which, stay tuned for a post about the scripted comedies and dramas about politics, including shows starring two fictional presidents, Selina Meyer and Frank Underwood.
Posted by Pinku-Sensei at 9:35 AM