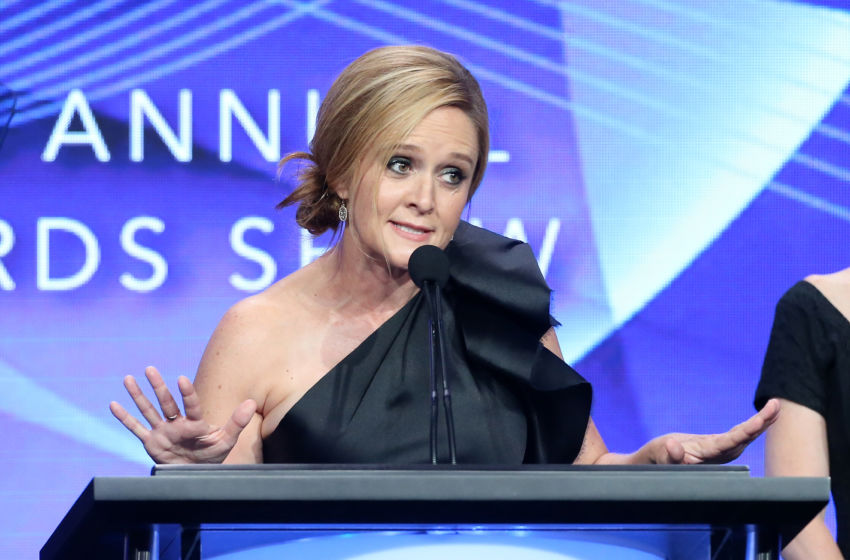 I concluded 'The Handmaid's Tale,' 'Stranger Things,' and 'The Good Place' lead speculative fiction nominees at Television Critics Association Awards with "I might write about the reality and news and information program nominees later."  I think now fits that criterion, especially as the awards ceremony is this Saturday, August 5th.

At first glance, what I found remarkable about the news and information nominees was the inclusion of political humor shows.  At second glance, the number of political documentaries also struck me.

While I agree that both "Full Frontal With Samantha Bee" and "Last Week Tonight" are excellent sources of information -- in fact, I called "Last Week Tonight" "the best news program on TV today, even if it is considered entertainment" -- both shows are primarily comedy about the news, not the news itself.  Still, it says a lot about our times that the comedians do a better job of covering important stories than the actual journalists.  Many of today's stories, particularly the political ones, are absurd and deserve nothing better than to be laughed at.

On the other hand, some stories deserve a more serious and longer look than the evening news can give them, so they become the province of documentaries.  Two of them, "O.J.: Made in America" and "Weiner," were also nominated.  The former has been nominated for six Primetime Emmy Awards, while the latter probably should have been nominated for at least one.*

Rounding out the field are "Planet Earth II" and "The Lead With Jake Tapper," the only true news program nominated.  The former has ten Primetime Emmy nominations, while the latter couldn't even pick up one at the News and Documentary Emmy Awards; the Emmy voters prefer Anderson Cooper, who earned three nominations there, but that's a story for a future entry.

Speaking of preferences, Samantha Bee, who has six nominations for her regular show and the "Not the White House Correspondents Dinner" special, is the returning winner and favorite, at least for this award.  On the other hand, I expect John Oliver will beat her again at the Primetime Emmy Awards for Talk Variety Series.

Politics also showed up in the next category.

Three of these stand out as not being standard reality shows.  "Leah Remini: Scientology and the Aftermath" has two Primetime Emmy nominations for Informational Series or Special and Sound Editing for a Nonfiction Program.  It's not a reality show, despite what the television critics think.  Neither is "The Keepers," which has an Emmy nomination for Documentary or Nonfiction Series.  Finally, "The Circus" straddles the line between reality and documentary, as it covered the presidential primaries in more or less real time; I found it both entertaining and informative.

If I thought the critics would vote for a reality show, I would think they would vote for either "The Great British Baking Show" or "Shark Tank."  That's not what I expect.  Instead, I suspect they will vote for either Leah Remini, a story about Hollywood that other people in Hollywood would like, or "The Keepers."  Sorry, "The Circus," just be happy to be nominated.

That's enough of the Television Critics Association Awards for now.  Stay tuned for more about the Emmy nominees.

*I'm biased, as I have been following this story for four years and think it deserves more recognition beyond being a political scandal.
Posted by Pinku-Sensei at 10:45 AM