'Game of Thrones,' 'The Handmaid's Tale,' and 'Stranger Things' nominated for Drama Series at the 2018 WGA Awards 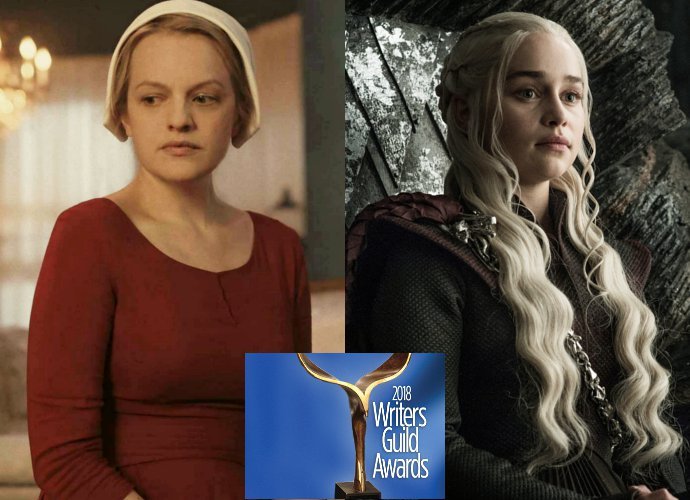 I ended 'The Handmaid's Tale' leads speculative fiction on television at the 2018 Golden Globe Awards by writing "I'll see if I have the time and energy for the WGA Awards tomorrow."  It seems I have, so here goes.

As I wrote when I reported last year's speculative fiction nominees at the Writers Guild Awards, "there appears to be critical and popular consensus both on which speculative fiction shows are best, but also that they are among the best shows on television right now."  Replace popular with professional, as the People's Choice Awards will effectively skip this year, and the same is happening with this year's speculative fiction series and miniseries now that the WGA has weighed in.  The drama series are "Game of Thrones," "The Handmaid's Tale," and "Stranger Things," which have shown up on four nomination or award lists so far this month (five in the case of "Game of Thrones" because of its soundtrack nomination at the Grammys.  The miniseries is "American Horror Story: Cult," although the Hollywood Foreign Press Association likes "Twin Peaks" better.  Expect this to be true all the way to the Emmy Awards next year, as there will be second season of "The Handmaid's Tale" airing within the Emmy eligibility window.  However, the Emmy Awards should have a fourth speculative fiction drama to recognize, as the second season of "Westworld" will air in the spring as well.  The current Golden Age of speculative fiction on television will continue for at least another year!

In addition to "Game of Thrones," "The Handmaid's Tale," and "Stranger Things" being nominated for Drama Series, "The Handmaid's Tale" earned a nomination for New Series.  I expect the Hulu adaptation of Margaret Atwood's dystopian novel to be the favorite to win both.  "American Horror Story: Cult" is the sole speculative fiction in Long Form Original.  Short Form New Media Adapted has episodes of speculative fiction series as three of its four nominees, two episodes of "Marvel’s Agents of S.H.I.E.L.D.: Slingshot" and one of "The Walking Dead: Red Machete."  Once again, the short form series in "The Walking Dead" universe get more love than the main shows.  Speaking of missing love, an episode of "The Leftovers" earned a nomination for Episodic Drama.  That's a series that I thought was neglected during its three-season run.  Competing against it is "The OA."

Science and technology appear in the nominations of "Silicon Valley" for Comedy Series and "The Immortal Life of Henrietta Lacks" for Long Form Adapted.

Follow over the jump for all the nominees in the above categories plus my opinions about their chances.

Here are the nominees from Deadline.

As I wrote, I expect "The Handmaid's Tale" to win this.

I think this will likely to go "Master of None," which won the comparable award at the Emmys. The runners up will be "Veep," which has been strangely absent from the nomination lists so far, and "GLOW."  Sorry, nerds of "Silicon Valley."  At least you were nominated while "Big Bang Theory" was not.

As I wrote, I expect "The Handmaid's Tale" will win, but it could still lose to "GLOW" in an upset.  It depends on whether the writers like comedy over drama.

"American Horror Story: Cult" is the speculative fiction series, but I expect "Feud" will win.

Big Little Lies, Teleplay by David E. Kelley, Based on the Novel by Liane Moriarty; HBO

The Immortal Life of Henrietta Lacks, Teleplay by Peter Landesman and Alexander Woo and George C. Wolfe, Based on the book written by Rebecca Skloot; HBO

The Wizard of Lies, Teleplay by Sam Levinson and John Burnham Schwartz and Samuel Baum, Based on the Book Written by Diane B. Henriques and Truth and Consequences by Laurie Sandell; HBO

I'm rooting for "The Immortal Life of Henrietta Lacks" as the science show, but I think it has the worst chances of the field.  I'd rank the shows ahead of it as "Big Little Lies," "Fargo," and "The Wizard of Lies."

“Starboy” (Zac & Mia), Teleplay by Allen Clary and Andrew Rothschild, Based on the novel Zac & Mia by A.J. Betts; go90.com

As much as I want to root for the superhero team and the survivors of the zombie apocalypse, I have a feeling that "Zac & Mia" have the best shot.

“A Father’s Watch” (The Simpsons), Written by Simon Rich; Fox

“The Serfsons” (The Simpsons), Written by Brian Kelley; Fox

As much as I am rooting for "The Leftovers," as this will be the last year it can be recognized, I think "The Americans" might pull this one out.

I'd prefer "Just Add Magic."  I expect the award will go to one of the two "Sesame Street" nominations instead.

That's it for the WGA Awards until the movie nominees are announced.  Stay tuned for a post about "The Last Jedi" at the box office.  Star Wars!
Posted by Pinku-Sensei at 12:00 AM