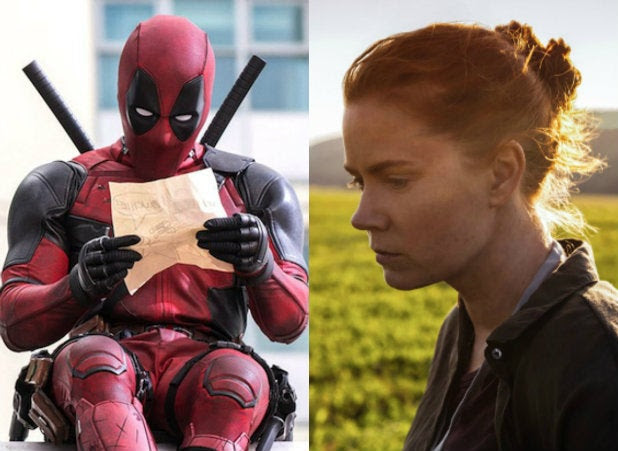 I asked my readers if I should blog about speculative fiction nominees for the Writers Guild of America Awards last December, when I posted about the Grammy nominations in music for visual media.  At the time, my readers said no, voting that I should post Reactions to 'Rogue One' from critics and stars instead.  As I noted yesterday, the awards are being presented today, so I'm finally getting around to recognizing the nominees before their nominations turn into either awards or pumpkins.

Although movies are usually considered to be the more prestigeous art form and as such are listed first by associations that recognize achievement in both film and television, there are only three awards being given out for movies, Original Screenplay, Adapted Screenplay, and Documentary Screenplay.  Both of the speculative fiction nominees are being recognized for Adapted Screenplay, "Arrival" and "Deadpool."  I've seen both of these movies and both deserve their nominations, although "Deadpool" is a bit of a surprise.*  I'm rooting for "Arrival," which my wife and I watched last night and really enjoyed as a serious movie about psychology and language.  However, I wouldn't be surprised if it loses to any of the rest of the field, particularly "Fences" and "Hidden Figures."  I would be O.K. if "Hidden Figures" won instead, as it's also about space.

Follow over the jump for the speculative fiction nominees in television, new media, and video games.

As I've written several times, most recently in 'Stranger Things' wins awards from both SAG and Producers Guild, "'there appears to be critical and popular consensus both on which speculative fiction shows are best, but also that they are among the best shows on television right now.'  Add in the opinion of the actors themselves, and its now a clear popular, critical, and professional consensus on both the best speculative fiction shows and their place among the best television shows of last year."  The three series are "Game of Thrones," "Stranger Things," and "Westworld."  All three, along with "The Americans" and "Better Call Saul," have been nominated for Drama Series.  "Stranger Things" and "Westworld" were also nominated for New Series, while "Game of Thrones" also earned a nomination for Episodic Drama for the episode "The Winds of Winter."  I'm rooting for "Westworld," but I still think it's the year of "Stranger Things," at least amont the professionals, so I wouldn't be surprised if it won.

“Under Siege” (The Strain), Written by Bradley Thompson & David Weddle, Based on the novels by Guillermo del Toro and Chuck Hogan; fxnetworks.com

I'm rooting for "Star Wars Rebels," but I expect the award will go to one of the episodes of "BoJack Horseman" unless the voters split too evenly.

Children's shows also have lots of fantasy elements, but I won't speculate on the strengths of the nominees.  Instead, I'll just leave the nominees here.

Once Upon a Sesame Street Christmas, Written by Geri Cole & Ken Scarborough; HBO

There are speculative fiction entrees scattered among the rest of the categories.  "11.22.63," adapted from a Stephen King novel, is one of the nominees for Adapted Long Form.  I'm sure it will lose to "The People vs. O.J. Simpson: American Crime Story."  The episode "A Taste of Zephyria" from "Son of Zorn" earned a nomination for Episodic Comedy.  I expect it will lose to the nominated episode of "Atlanta."

Finally, I'm glad to see that video games are recognized by one of the professional associations.

I'm an MMORGP player, not a console player, so I have no opinions of these nominees.  Maybe one of my readers can offer their thoughts on these games.

Tomorrow is Presidents Day.  I'm sure I can find something to write on the subject.

*"Deadpool" did not earn any Oscar nominations, much to the annoyance of its fans, while "Suicide Squad" earned both an Oscar nomination and a couple of Razzie nominations.  It managed to do what "Batman V Superman: Dawn of Justice" did not, get nominations for best and worst -- but that's a story for an entry later this week.  Stay tuned.