Science, science fiction, and fantasy among the 2017 Grammy nominees 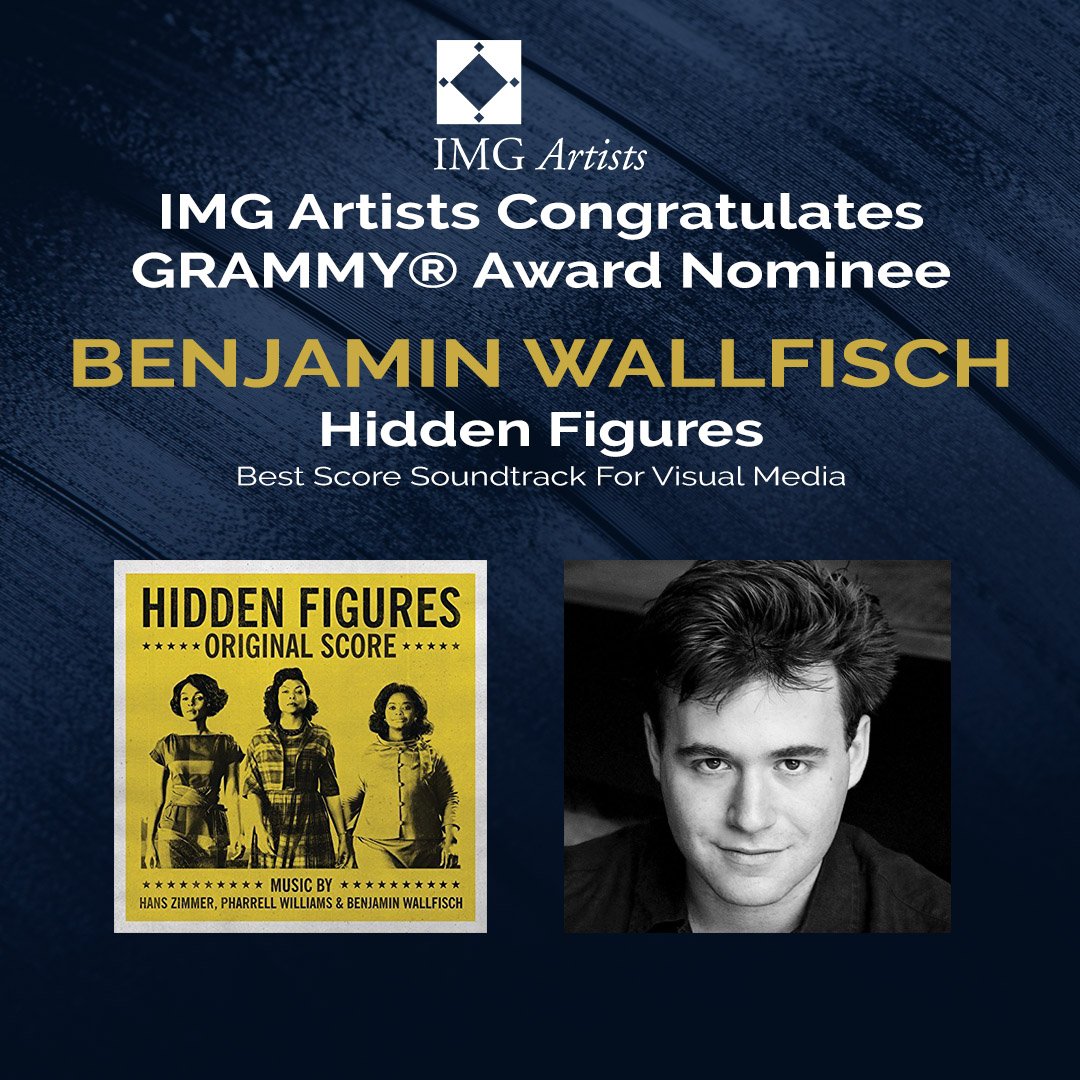 I told my readers to "Stay tuned for a more standard Sunday entertainment feature focusing on the Grammy nominees relevant to science, science fiction, and fantasy" at the end of St. Clair wins 2017 WDIV Battle of the Bands plus my other favorites.  Here are the relevant nominated works from the Los Angeles Times with some assistance from File 770 for the science entries and re-ordered to suit my priorities.

This field is a sweep for genre entertainment from top to bottom.  Every nominee is a past or likely future Saturn Award candidate.  "Arrival" was nominated for Best Science Fiction Film and won Best Film Screenplay.  "Dunkirk" is likely to be nominated for Best Action Film early next year.  "Game of Thrones" is a perennial nominee for Best Fantasy TV Show.  "Hidden Figures" won Best Action/Adventure Film.  Finally, "La La Land" won both Best Independent Film and Best Film Music.  It also won Best Achievement in Music Written for Motion Pictures (Original Score) at the Academy Awards.  I would say "La La Land" is the favorite, but the Emmy electorate is not the Oscar electorate and can vote differently.  For example, John Williams lost at the Oscars but won the Grammy for "The Force Awakens."  I'm not convinced that will happen next year.

The next category is also a genre sweep from start to finish.

In addition to "Hidden Figures" and "La La Land," which I mentioned above, all these films are past or present Saturn Award nominees.  "Baby Driver" is likely to join "Dunkirk" as in the Action category.  "Guardians of the Galaxy Vol. 2" is a lock to be nominated for Best Comic-to-Motion Picture Release and the movie I expect most likely to win, even if it isn't my favorite in the category.  "Moana" was nominated for Best Animated Film Release.

As for which will win, it depends on what the voters want.  If they want all original songs, they pick either "La La Land" or "Moana" with the advantage to "La La Land."  If they want a combination of old and original, they can vote for "Hidden Figures," the songs in which I really enjoyed and would vote for if I were eligible.  If they want all recycled, they can choose between "Baby Driver" and "Guardians of the Galaxy Vol. 2."  Both of the latter had really interesting mixes of classics, but I preferred "Guardians of the Galaxy."

Genre films aren't as well represented in the next category, but are stronger than one might think at first glance.

"City of Stars" won for Best Achievement in Music Written for Motion Pictures (Original Song) at the Academy Awards and makes for the third nominee from "La La Land."  Congratulations to Hurwitz for getting nominations in all three visual media categories.  It beat "How Far I'll Go" from "Moana" in that category at the Oscars, so I would say "City of Stars" is favored.  The last song from last year was "Never Give Up" by Sia from "Lion."  That film makes this a surprisingly strong showing for genre, as it was nominated for Best Independent Film at the Saturn Awards, even though it is a biography and thus not really fiction. 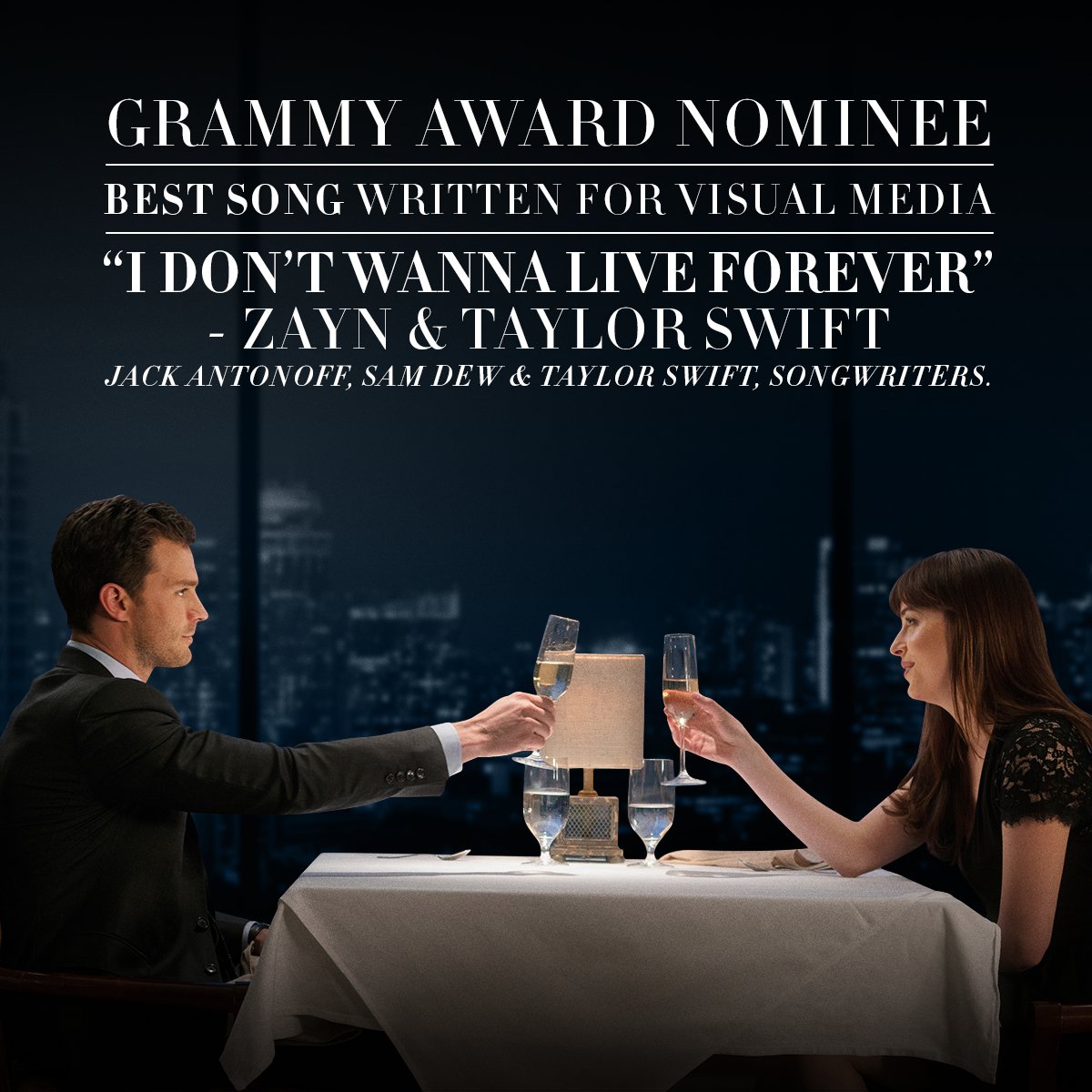 As for the nominees from this year's films, I expected "Fifty Shades Darker" to be recognized.

Just like the first installment in the trilogy, it looks like the songs will be the best part of the movie.  Here's to seeing them nominated for Grammys and Oscars along with the movie itself nominated for a Razzie!

One prediction down, two to go.

The song that I think is most likely to give "City of Stars" a run for its money is "Stand Up for Something" by Common & Diane Warren from "Marshall."  Common won both an Oscar and a Grammy for "Glory" from "Selma" and he just won an Emmy for “The Letter to the Free” from "13th."  Even if he doesn't win the Grammy, this is a good sign he'll be nominated for an Oscar in January.  Now he just needs to write a stage musical so he can be eligible for a Tony to earn the EGOT. 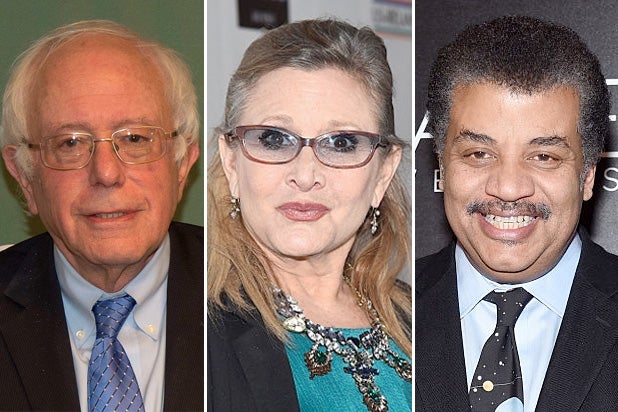 The next category pits science against science fiction and politics as well as music.

"Astrophysics for People in a Hurry" — Neil deGrasse Tyson
"Born to Run" — Bruce Springsteen
"Confessions of a Serial Songwriter" — Shelly Peiken
"Our Revolution: A Future to Believe In (Bernie Sanders)" — Bernie Sanders and Mark Ruffalo
"The Princess Diarist" — Carrie Fisher

The Wrap had the best headline about this category -- "Grammys Weirdest Showdown: Bernie Sanders vs Carrie Fisher vs Neil deGrasse Tyson."  I don't know who to root for.  Of course, with this electorate, Springsteen is likely to win.

Science makes a cameo in the next category.

Yes, those Voyagers, which I last wrote about three years ago.  They carried literal gold records out with them into the cosmos in case other intelligent life ever found them.  Those recordings have now been made available for us on Earth to listen to.  Watch as NBC's Today reports 40 Years After NASA Launched Voyager 1 and 2, Its Golden Record Is Getting A Box Set.

When NASA launched Voyager 1 and Voyager 2 deep into space 40 years ago, each spacecraft brought along a golden record with sights and sounds from Earth, just in case any aliens were to stumble across it. In this week’s Sunday Closer, NBC’s Joe Fryer reports that the record is being re-created in a box set for humans on Earth.

That's news I should have reported here right after I wrote about the Great American Eclipse.  Then again, that's why I blog about awards shows, so I can get second and third chances to write about events and things I missed the first time.

One of the acts nominated above, Nick Cave & the Bad Seeds, is also nominated in the next category, which is the band's only other nomination.

I know this category has nothing to do with speculative fiction other than Nick Cave & the Bad Seeds having a song on the "Batman Forever" soundtrack and The Grateful Dead being generally trippy, but I included it to complete the circle.  I started off with music for movies and television and I'm finishing it with movies and TV shows about music.  It completes a circle and I like completing circles.

As for which one I'm rooting for, it's "Long Strange Trip," a selection made because of my age and feeling that any movie about The Grateful Dead would be interesting, not because I actually know the movies.  It probably isn't the favorite, even though it was also nominated for the Critics' Choice Documentary Awards and thus might also be nominated for an Oscar.  The highest rated on IMDB is "The Defiant Ones" with an 8.7 rating.  That's my pick for favorite in this category.  It's also likely to be an Emmy nominee next year, as it's a miniseries, not a movie.

Speaking of the Critics' Choice Documentary Awards, "An Inconvenient Sequel: Truth to Power" earned three nominations, as did "Chasing Coral," the sequel to "Chasing Ice," so I might just write about them in a future entry.  Stay tuned.