That was my promise in the footnote to 'Chasing Coral' versus 'Yosemite' — two nominees for Outstanding Nature Documentary both examine climate change, which I wrote in response to mentioning "Tower."


For their third nominated category, both "Chasing Coral" and "Yosemite" are competing for Outstanding Music & Sound along with the HBO Documentary Films "Cries From Syria" and "The Music of Strangers: Yo-Yo Ma and the Silk Road Ensemble" and the "Independent Lens" episode "Tower."  The most formidable overall are "Cries from Syria," which also has nominations for Outstanding Current Affairs Documentary, Outstanding Writing, and Outstanding Research, and "Tower," about the first mass school shooting in U.S. history at the University of Texas, which earned a nomination for Outstanding Historical Documentary as well.

Joining "Tower" in competing for Outstanding Historical Documentary are Independent Lens episode "Birth of a Movement" and the Netflix documentaries "Cuba and the Cameraman," "Let It Fall: Los Angeles: 1982-1992," and "Blood On The Mountain."  Other than "Tower," the only other nominee in this category with a second nomination is "Let It Fall: Los Angeles: 1982-1992," which has a nomination for Outstanding Research.  Based on that and my including it in The most honored political documentaries of 2017 examine crime, injustice, and the Syrian Civil War, I consider it to be the strongest competition to "Tower" for Outstanding Historical Documentary.  As for its chances to win its second nominated category, I'm recycling what I wrote: "I suspect 'The Music of Strangers: Yo-Yo Ma and the Silk Road Ensemble' might be the fiercest competitor for Outstanding Music & Sound; it also earned nominations for Outstanding Arts & Culture Documentary and Outstanding Editing: Documentary."

To get a feel for the documentary and the incident it portrays, watch the trailer from PBS.

Combining archival footage with rotoscopic animation in a dynamic, never-before-seen way, TOWER reveals the action-packed, untold stories of the witnesses, heroes, and survivors of America’s first mass school shooting, at the University of Texas, 1966, when the worst in one man brought out the best in so many others. 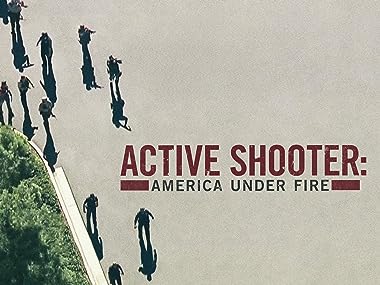 The other nominated episode of "Active Shooter: America Under Fire" is "Charleston, South Carolina," which is competing for Outstanding Social Issue Documentary with the "Frontline" episode "Last Days of Solitary," two HBO Documentary Films, "Abortion: Stories Women Tell" and "Unlocking the Cage," and fellow Showtime documentary "Jackson."  I am finding it difficult to handicap this category, as these are the only nominations for each fo these shows.  That written, my sympathies lie with "Unlocking the Cage," which is about animal rights for chimpanzees, which echoes the themes of PETA attempts a science-fiction solution to a real-world issue and The ethics of orcas as entertainment.

As for "Active Shooter: America Under Fire," watch its tralier from Showtime.

The traumatic events of infamous mass shootings and their aftermath.
...
Whether due to acts of terrorism, hate, or mental instability, mass shootings have become all too commonplace. Active Shooter: America Under Fire is a documentary series that examines this disturbing phenomenon from the points of view of victims, family members, emergency medical workers and first responders, who bravely risk their own lives in the face of grave danger. Each episode recounts a specific incident using archival footage and in-depth interviews to shine a spotlight on the traumatic events and their aftermath. The results are powerful, eye-opening, and hopefully change-inducing. 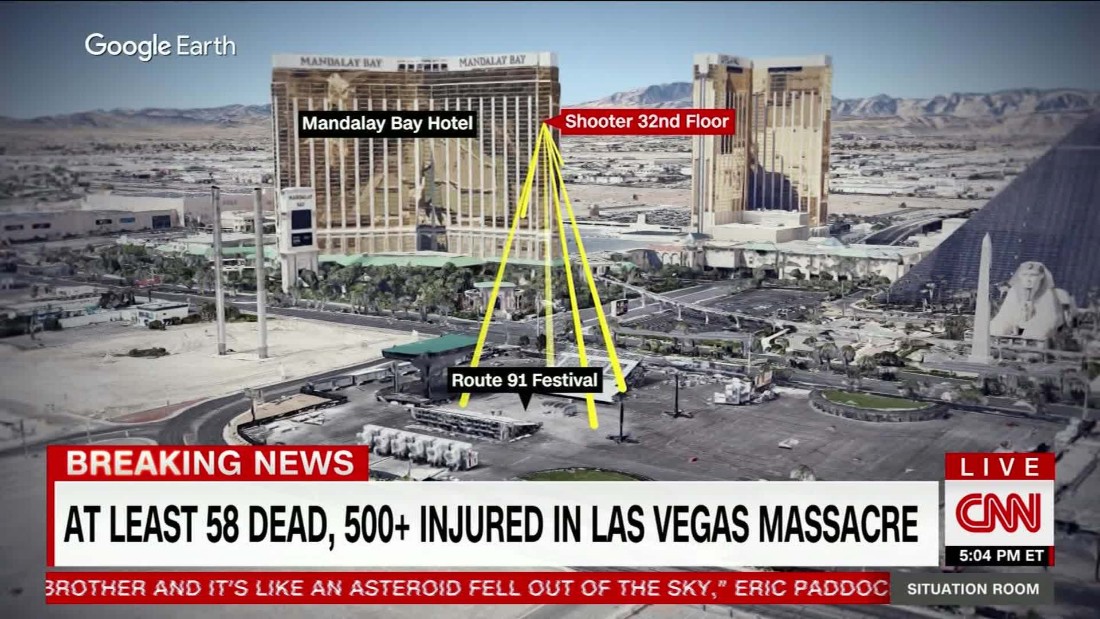 I begin my discussion of the nominated reports on the Las Vegas Massacre by being a good environmentalist and recycling what I wrote in Coverage of Hurricanes Harvey, Irma, and Maria nominated for News and Documentary Emmy Awards.


The Washington Post...earned a News & Documentary Emmy nomination for Outstanding Breaking News Coverage for its coverage of the 2017 Hurricane Season...The nominees for Outstanding Breaking News Coverage include CNN's Worldwide Hurricane Coverage, so this category includes two nominees that covered the hurricane season.  The rest consist of ABC News: The Las Vegas Massacre and CNN's coverage of the Fall of Raqqa and the Manchester Concert Attack.  As I wrote, mass shootings, hurricanes, and Syria dominated the news, so they're dominating the news nominations.
...
There is more coverage of Harvey nominated in the next category, Outstanding Coverage of a Breaking News Story in a Newscast, where The Weather Channel's Live Coverage of Hurricane Harvey is nominated alongside "Charlottesville: Race and Terror," "BBC World News: Fierce Fight for Mosul," "CBS News: Las Vegas Massacre," and "NBC Nightly News with Lester Holt: Las Vegas Massacre."
...
For my readers who are wondering about coverage of Hurricane Maria, Univision's "Primer Impacto: Unidos en el Dolor: Huracán María en Puerto Rico (United in Pain: Hurricane Maria in Puerto Rico)" and Univision's "Aquí y Ahora: Un doble golpe (Double Impact)" both earned nominations for Outstanding Coverage of a Breaking News Story in Spanish.  Competing against them are another report from Univision's Aquí y Ahora, "Terror en Las Vegas (Terror in Las Vegas)" (sometimes the news looks the same in both English and Spanish, even if it sounds different), and two about the Mexican earthquake, "CNN en Español: Terremoto en México (Mexico Earthquake)," and "Noticiero Telemundo: Terremoto en México (Earthquake in Mexico)."

In the first category, the two nominees that covered the Las Vegas Massacre may split the vote, so I think one of the other three will likely win.  In the second category, I've already written that "Charlottesville: Race and Terror" is the one I consider to be the favorite.  I failed to pick a favorite in the third category yesterday, so I'll do it today by choosing "Aquí y Ahora: Un doble golpe (Double Impact)" — two disasters in one!

It turns out that I missed a nominee about Hurricane Harvey that is competing against two nominees covering the Las Vegas Massacre for Outstanding Coverage of a Breaking News Story in a Newsmagazine, where three episodes of "20/20" are nominated, "A Hostile Act: What Happened to Otto?" "City Underwater," and "Las Vegas: Heartbreak and Heroes," joined by the "60 Minutes" episode "Storming Room 135" and "On Assignment with Richard Engel" episode "Fall of Mosul."  I think the "60 Minutes" episode "Storming Room 135" would be the favorite, as the three "20/20" episodes might split the vote.

I also missed a nominee about last August's Weimar moment in Charlottesville competing with one about the Las Vegas Massacre for Outstanding Live Interview, where four CNN segments are nominated, two from "Anderson Cooper 360°," "Anderson Cooper Interviews Janet Porter" and "Faces of Grief: Sutherland Springs Pastor & Heather Melton," the latter of which is also about a mass shooting, "Chris Cuomo Interviews Las Vegas Massacre Survivors" on "New Day," and "Jake Tapper and Kellyanne Conway" on "The Lead With Jake Tapper," which took place in the aftermath of Charlottesville.  "This Week with George Stephanopoulos" provided the fifth nominee "Interview with Sarah Sanders."  Of all of them, I think the favorite is Jake Tapper interviewing Kellyanne Conway.

The final nominee examining the Las Vegas Massacre is "The New York Times: 10 Minutes. 12 Gunfire Bursts. 30 Videos. Mapping the Las Vegas Massacre," which earned a nomination for Outstanding New Approaches: Current News.  Joining it is another nominee about last year's hurricane season that I missed the first time around, "Sin Luz: Life Without Power" by The Washington Post, plus two more nominees for video journalism from The New York Times, "Escaping Boko Haram" and "How 655,000 Rohingya Muslims Escaped," and "From Migrants to Refugees: The New Plight of Central Americans" from Univision Noticias Digital.  The New York Times video provides a good summary of the story, so I'm embedding it.  Watch.

The shots began at 10:05pm. Twelve bursts of gunfire later, the police broke down Stephen Paddock’s door at the Mandalay Bay. The Times mapped 30 videos to draw perhaps the most complete picture to date of what happened.

I find that the dispassionate analysis makes the incident even more chilling.

One of the local news nominees covered a different mass shooting, which I mentioned in passing as part of A HREF="https://crazyeddiethemotie.blogspot.com/2018/09/coverage-of-hurricanes-harvey-irma-and.html">Coverage of Hurricanes Harvey, Irma, and Maria nominated for News and Documentary Emmy Awards.

I had no idea which is likely to win and I still don't.  That written, I close with Investigation underway after security footage released of airport attack from WPLG Local 10.

The moment that gunman Esteban Santiago opened fire on travelers at Fort Lauderdale-Hollywood International Airport on Friday was captured by security cameras.

Writing this entry was an intense and draining experience and I'm sure it was for my readers.  For their edification, I recommend my readers review Instructions on how to deal with an active shooter.  For me, I'm taking a break from the News and Documentary Emmy nominees until Monday.  Stay tuned for posts about Coffee Party USA for National Coffee Day and this year's celebration of Wester.

*ETA: The "14 nominees with 22 nominations" are in error, as I mistakenly included three nominees with five nominations about Mosul, which is in Iraq.  Still, they are related as they were also about the fight against ISIS/Daesh, a participant in the Syrian Civil War.
Posted by Pinku-Sensei at 4:34 PM