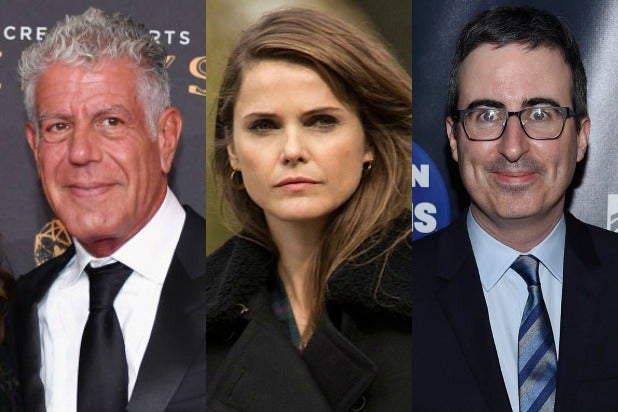 While the Creative Arts Emmy Awards are being given out, I'm taking a break from the Emmys to write about the Television Critics Association (TCA) Awards, which were given out last month.  I begin where I should have two months ago, when the nominations were announced, with The Hollywood Reporter's THR News: 2018 TV Critic Awards Nominations: ‘Killing Eve’ Slays Competition.

While one spy-assassin drama may have led the nominations, another led the actual awards as "The Americans" swept all three categories in which it was nominated, winning Program of the Year, Outstanding Achievement in Drama, and Individual Achievement in Drama for Keri Russell.  Barring a bunch of upset wins at next week's Emmy Awards, that's a great way for the series to go out with a bang.

"Killing Eve" did manage one TCA Award, Outstanding New Program, beating "Barry," "Counterpart," "GLOW," "The Marvelous Mrs. Maisel," and "Mindhunter."  That's impressive, as four of its competitors have already won Emmy Awards ("The Marvelous Mrs. Maisel" with three, "GLOW" with two, and "Barry" and "Counterpart" with one each) with two nights of ceremonies still to go.  Congratulations and break a leg next week at the Primetime Emmys, where Sandra Oh earned a nomination for Outstanding Lead Actress in a Drama Series and the show itself is competing for Outstanding Writing for a Drama Series.

The shows nominated along with "The Americans" for Program of the Year were "Atlanta," "The Good Place," "The Handmaid's Tale," "Killing Eve," and "This is Us."  Out of all of them, I'd have expected "The Handmaid's Tale" to repeat last year's victory and would have been rooting for the speculative fiction nominee to win.  The critics surprised me by picking critical favorite "The Americans" over a field of more popular shows.

I have the same reaction to "The Americans" winning Outstanding Achievement in Drama, a mildly surprising win over a field that included more popular shows such as "The Crown," "The Handmaid's Tale," and "This is Us" in addition to underdogs like "Killing Eve" and "The Good Fight."  All but "This is Us" make trenchant political and social comments while "This is Us" examines social issues in a more intimate way, so all of them pleased me as nominees, especially "The Good Fight," which only seems to earn Emmy nominations for its music.  At least the musicians are watching the show; other branches of the Television Academy don't seem to be watching.  I have the same reaction to that as I do to "The Americans" winning; may both shows find the audience they deserve when people binge watch the series.

The field was open for Individual Achievement in Drama, as Carrie Coon was not renominated (let's see if that holds next year, as she would be eligible for her role in "The Sinner").  Given a field of Jodie Comer and Sandra Oh ("Killing Eve"), Darren Criss ("The Assassination of Gianni Versace: American Crime Story"), Elisabeth Moss ("The Handmaid's Tale"), and Keri Russell and Matthew Rhys ("The Americans"), I would have expected the nominees for "Killing Eve" and "The Americans" to have split their votes and settled on Elisabeth Moss, who I would have rooted for just because of her winning at last year's Emmys as well as her being the representative of the sole speculative fiction nominee.  I have to say that my rooting for her would have been half-hearted as I think Russell is the better actress.  Just the same, all the nominees represented shows about politics and government, so any winner would have been O.K. with me. 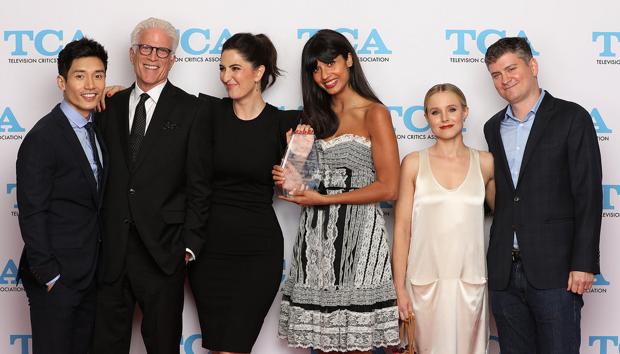 With a field of "Atlanta," "Barry," "GLOW," "The Good Place," "The Marvelous Mrs. Maisel," and "One Day at a Time," for Outstanding Achievement in Comedy, I would have expected "The Marvelous Mrs. Maisel," which makes a lot of social and some political commentary on the U.S. and particularly New York City in the 1950s, to win, while my pick to upset it would have been "Atlanta," which makes comparable observations about contemporary America as well as its namesake city.  That would have been despite my rooting for "The Good Place" as the sole speculative fiction entry amone the nominees.  I am glad to have been wrong.  This award will join its Hugo Award for Best Dramatic Presentation – Short Form on the show's trophy shelf - about forking time!

"The Marvelous Mrs. Maisel" did not go home empty-handed, as Rachel Brosnahan took home a trophy for Individual Achievement in Comedy.  That's the result I would have expected against a field consisting of Pamela Adlon ("Better Things"), Rachel Bloom ("Crazy Ex-Girlfriend"), Ted Danson ("The Good Place"), Donald Glover {"Atlanta"), and Bill Hader ("Barry").  While I would have half-hearted rooted for Danson, I would have picked Brosnahan to win and Glover to upset her.  Things worked out as planned, if not hoped for.

If I had the opportunity to comment on the nominees for Outstanding Achievement in Movies, Miniseries and Specials before the awards, I'd have rooted for "Twin Peaks: The Return" while expecting the critics to pick "The Tale."  That would have been before I examined the limited series nominations at the Emmy Awards, which would have pointed me to "The Assassination of Gianni Versace: American Crime Story," the actual winner.  I don't think I'd have even considered "Alias Grace," "Howards End," or "Patrick Melrose," the other nominees.

I should have expected that "Anthony Bourdain: Parts Unknown" would win Outstanding Achievement in News and Information, as I have predicted that Bourdain's recent suicide will drive a sympathy vote for his show at the Emmy Awards.  It did, driving him over a field consisting of "60 Minutes," "Blue Planet II," "The Rachel Maddow Show," "The Vietnam War," and "Wild Wild Country," a combination of nominees from 'Jane,' 'Icarus,' and 'Blue Planet II' — Nature, science, and politics in documentaries at the Creative Arts and Primetime Emmy Awards and Putin and Trump-Russia at the Emmy Awards.

I would have expected and rooted for "Last Week Tonight with John Oliver" to have defeated a field that was nearly identical to that for Outstanding Writing for a Variety Series at the Emmy Awards, "Full Frontal with Samantha Bee," "Jimmy Kimmel Live," "Late Night with Seth Meyers," "The Late Show with Stephen Colbert," and "Saturday Night Live."  I did.  Congratulations!

I'm running out of gas coming to the end, so I'll conclude by writing that I'm not terribly surprised "Queer Eye" won Outstanding Achievement in Reality Programming, although I'd have rooted for "RuPaul's Drag Race" or "Project Runway."  A former roommate of mine tried out for the latter and is a big fan of the former, so I would have supported her choices.  I'm also not the least bit surprised that "Sesame Street" won Outstanding Achievement in Youth Programming even if I would have been rooing for "Elena of Avalor" again as the nominee with the strongest fantastic elements.

I'll either return to the non-fiction winners at the Emmy Awards or tackle either the Hugo Award winners or the Teen Choice Award winners tomorrow.  Stay tuned to see if I prefer reality or fantasy.