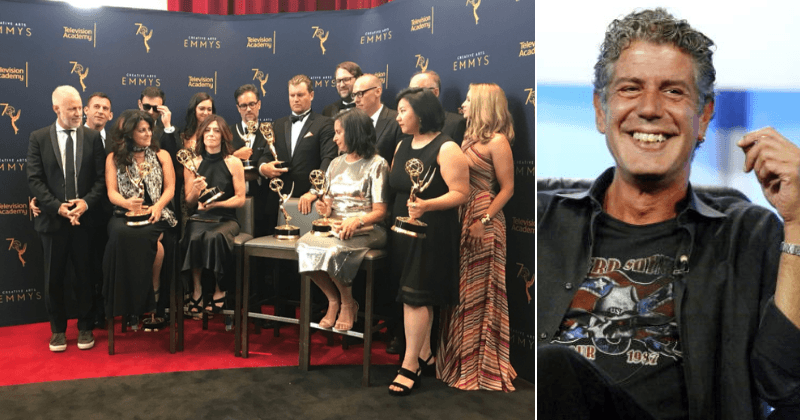 Yesterday, I told my readers to "stay tuned for me following up on 'Anthony Bourdain: Parts Unknown' earns seven posthumous Emmy nominations; the series won six of them!"  I expected a sympathy vote would earn him and his show two, maybe three, awards.  I had no idea Bourdain and "Parts Unknown" would win six.  I vastly underestimated the effect his death would have on the Emmy voters.  I begin the discussion with Wochit Entertainment's Anthony Bourdain Honored With Posthumous Emmy Awards.

CNN reported that the Television Academy honored late host Anthony Bourdain on Sunday with multiple wins at the Creative Arts Emmy Awards. Bourdain and his series, "Anthony Bourdain: Parts Unknown," which airs on CNN, won six awards. They included two individual awards for Bourdain, one for outstanding writing for a nonfiction program and another for outstanding informational series. CNN will premiere the first of eight final episodes of "Parts Unknown" on September 23.

Time to compare my predictions with reality, beginning with one I made in Bill Nye, Neil deGrasse Tyson, and NASA all nominees at the 70th Emmy Awards about the nominees for Outstanding Informational Series or Special, including "Anthony Bourdain: Parts Unknown."

I doubt either "StarTalk" or "Vice" will win.  Instead, I think it will be either “Leah Remini: Scientology and the Aftermath,” which won this category last year, or Anthony Bourdain: Parts Unknown, which won the category the four years before that.  Because of Bourdain's recent suicide, I suspect his show has the inside track.

I was right; it won.  I later predicted "that the same sympathy vote will make "Anthony Bourdain: Explore Parts Unknown" the major rival to "Jay Leno's Garage" for Outstanding Short Form Nonfiction Or Reality Series."  It was and it won as well.

Follow over the jump for the other four wins and one loss.

Here are my predictions from 'Jane,' 'Icarus,' and 'Blue Planet II' — Nature, science, and politics in documentaries at the Creative Arts and Primetime Emmy Awards.

The nominees for Outstanding Cinematography For A Nonfiction Program pit nature against cuisine with "Jane" and two episodes of "Blue Planet II" representing nature, while one episode each of "Anthony Bourdain: Parts Unknown" and "Chef's Table" competing for cuisine.  What a tough category!  I think "Blue Planet II" is the favorite based on the win for "Planet Earth II" in this category last year, but I wouldn't be surprised if "Jane" pulls out an upset.

"Jane" got this one.  I'll have more to say about that and its other Emmy tomorrow.

More of the multiple nominees for documentaries and nonfiction appear as nominees for Outstanding Picture Editing For A Nonfiction Program, The Lagos episode of "Anthony Bourdain: Parts Unknown," Episode 3 of "The Defiant Ones," "Jane," Part 3 of "Wild Wild Country," and "The Zen Diaries Of Garry Shandling."  In this category, I think it's a contest between "The Defiant Ones" and "Jane" — nature versus show business.  On that basis, I might give the edge to "The Defiant Ones."

Both "The Defiant Ones" and I got skunked in this category.  Instead, "Anthony Bourdain: Parts Unknown" won, much to my surprise.

Nature versus show business is also one of the themes in the nominees for Outstanding Sound Editing For A Nonfiction Program (Single Or MultiCamera) with "Blue Planet II" and "Jane" again representing the wild world while "The Defiant Ones" competing for entertainment.  Joining them are the Seattle episode of "Anthony Bourdain: Parts Unknown" and Episode 6 of "The Vietnam War."  Based on "Jane" winning the MPSE Golden Reel Award, I would say it's favored.

Again, I didn't think "Anthony Bourdain: Parts Unknown" would win.  Was I ever wrong!  By the way, this is what Deadline wrote was happening right after the presentation of this award.

They’re showing the In Memoriam segment, which is the same as last night’s version; a different one will air during the Primetime Emmys a week from tomorrow. Bourdain’s clips seem even more poignant than Saturday as he’s been a big part of this show tonight.

I can just imagine.

Nearly the same nominees appear in Outstanding Sound Mixing For A Nonfiction Program (Single or Multi-Camera) with "Wild Wild Country" replacing "Blue Planet II."  Again, based on "Jane" winning the Cinema Audio Society award, I think it's favored, although "Anthony Bourdain: Parts Unknown" earned a nomination in its category.

"Anthony Bourdain: Parts Unknown" won this one as well, but at least I wasn't completely surprised, as I picked it as the possible spoiler for "Jane."

The usual suspects are also competing for Outstanding Writing For A Nonfiction Program, "Anthony Bourdain: Parts Unknown," "The Defiant Ones," "Icarus," "Jane," "Mister Rogers: It's You I Like," and "The Vietnam War."  Once again, I consider "Jane" to be the front runner because it won the Writers Guild of America (WGA) award for Documentary Screenplay with "The Vietnam War" to be its strongest competition as it was nominated for Documentary Script - Other than Current Events.

I didn't even think about Bourdain winning this, but he did.  Deadline posted the acceptance speech for it.

This is the first of a run of awards that Anthony Bourdain’s show is up for tonight – the first awards show for his CNN series since his suicide in June. “Tony was nominated for this Emmy many times,” producer Lydia Tenaglia says in accepting. “But it had always eluded him, the one he had always coveted so it is with tremendous bittersweetness that I accept it on his behalf….his writing was always fiercely intelligent — very real no bullsh*t…. If he were here, he would thank his longtime literary agent and friend Kim Witherspoon for giving his words life through the medium of books…actually he wouldn’t have done that at all. He wouldn’t have thanked anybody he would have been …..but he’s really off on a journey to parts unknown,” she says, her voice breaking. “We wish we were there to shoot it with him and he really would have written the hell out of that episode.”

Farewell, although I may be writing about the show in the future, as CNN has eight more episodes to air, ones that might qualify for next year's Emmy Awards.

Stay tuned for the winners of awards for documentary movies, specials, and series.