Instructions on how to deal with an active shooter 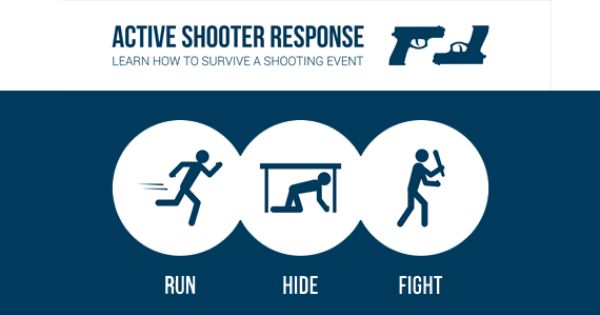 In the wake of the Parkland school shooting, my students asked me to do something I've never done before in class, explain how to react to an active shooter situation.  I did my best, telling them to try to escape first and giving them the first exit to the room and building and then where to assemble.  I then told them that if they couldn't escape to hide and found the best place in the room to hide.  I then told them to fight back and how to do so.  I mentioned this on my Facebook page and one of my colleagues directed me to this video from Boston College, which the college uses for training.


I'll be showing this to my students in the classes that I haven't given instructions to.  It's something I can do while advocating for Congress to fund gun violence research at the CDC and NIH, which I shared in October in response to the Las Vegas mass shooting, earning the post 8,851 additional raw page views and landing it in first on the all time list with 10,323 raw and 10,091 default page views.*  Despite the popularity of the post, I'm not optimistic about that happening soon in a land that loves guns.  Here's to hoping that changes.  In the meantime, stay safe, everyone.

*That lasted until December, when Vox explains how proportional representation can solve gerrymandering and help minor parties earned 12,750 default and 12,890 raw page views to unseat it. Sic transit gloria mundi.
Posted by Pinku-Sensei at 1:47 PM