'The Assassination Of Gianni Versace: American Crime Story' is the big winner among limited series at the Emmy Awards

I told my readers to "stay tuned" as I would "return with more Emmy blogging after Talk like a Pirate Day" at the end of 'Black Mirror' USS Callister wins Outstanding Television Movie plus three other Emmy Awards.  Talk Like a Pirate Day has passed, followed by an unplanned break for my birthday, so this week's Sunday entertainment feature comes at the perfect time to deliver on my promise by revisiting the predictions I made in Crime and punishment a major theme of Limited Series nominees at the Emmy Awards for National Wildlife Day, where I identified the common thread among nearly all the nominees and its significance when I wrote "stories of crime and punishment usually involve law enforcement and the courts, they tell their own tales about the roles and actions of government."

I begin with the big winner, "The Assassination Of Gianni Versace: American Crime Story."


I consider this season of "American Crime Story" to be the favorite to win Outstanding Limited Series, as it has the most nominations, won Outstanding Achievement in Movies, Miniseries and Specials at the TCA Awards last month, and its predecessor, "The People v. O. J. Simpson," won this award two years ago.  I also think that Darren Criss has the best chance of winning of all six acting nominees, having been nominated at both the TCA Awards and the MTV Movie and TV Awards, a rare confluence of critical and popular opinion.

Murphy's point about prejudice and hate crimes puts this mini-series into the kind of broader perspective that makes it a worthy examination of American society and history beyond merely an entertaining true story about crime and punishment.

Darren Criss from The Assassination of Gianni Versace: American Crime Story accepts the award for Outstanding Lead Actor in a Limited Series or Movie.

I went with Daniels because he grew up here.  If I had known that Criss had gone to the University of Michigan, I would definitely have picked him.  Go Blue! 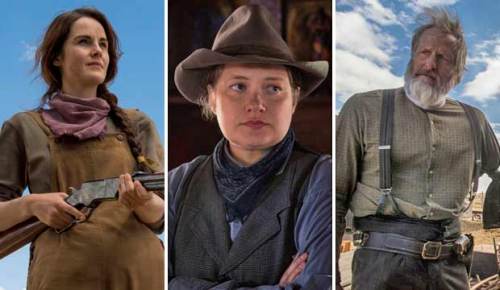 "Godless" has the distinction of earning the next most Emmy Awards with three.  Here are my predictions.

"Godless" won Outstanding Main Title Theme Music.  I'm glad, as it was my favorite new theme music this year, too.  As to whether I actually called it, I don't care.  It was the one I was rooting for.  One can catch the tail end of it as Jeff Daniels Wins Outstanding Supporting Actor in a Limited Series or Movie at the 70th Emmy Awards.

Jeff Daniels from Godless accepts the award for Outstanding Supporting Actor in a Limited Series or Movie.

I did call Daniels winning this award, as I did say he was among the strongest nominees from the mini-series and wrote that it would be between him and Michael Stuhlbarg.  He certainly gave a funny acceptance speech and I'm pleased that he won, but not nearly as pleased as wishing more than calling the next catgory.


I'll go out on a limb and pick Wever, who I enjoyed when she was on "The Walking Dead" and I wish was still there, as she lasted much longer in the comic.  When her character died, I thought, "No!  You idiots just killed off the only character in the show whose performer in the cast who has won an Emmy!"  Winning for "Godless" would make up for that.

I don't know about Wever, but it did for me.  Watch Merritt Wever Wins Outstanding Supporting Actress, Limited Series or Movie at the 70th Emmy Awards.

Merritt Wever from Godless accepts the award for Outstanding Supporting Actress in a Limited Series or Movie.

While I thought she deserved it, I'm not sure she did.  That's O.K., your fans love you.

While the Emmy voters rewarded my hopes for Outstanding Supporting Actress in a Limited Series or Movie, they completely surprised me in the next category.


The nominees in this category [Outstanding Lead Actress in a Limited Series or Movie] have the least overlap with those in Outstanding Limited Series, as only "Godless" appears in both, while "The Tale" is a Television Movie nominee.  These are the only nominations for "The Sinner," "Law & Order True Crime: The Menendez Murders," and "Seven Seconds"...I find this another difficult category to pick, as Laura Dern, Edie Falco, and Sarah Paulson are all previous Emmy winners, Michelle Dockery and Regina King have multiple Emmy nominations, and Jessica Biel gave a riveting performance in the first season of "The Sinner."  While Paulson is the only prior winner in this category, Dern won an Emmy last year and probably gave the most compelling performance, so I'll choose her as the favorite.

I completely blew it.  Instead, watch Regina King Win Outstanding Lead Actress in a Limited Series or Movie at the 70th Emmy Awards.

Regina King from Seven Seconds accepts the award for Outstanding Lead Actress in a Limited Series or Movie.

While she seems as surprised as I was — she probably expected Dern to win, too — I've seen her work over the years, especially in "The Leftovers," and thought she deserved her award.  He win also highlighted a related theme to that of "The Assassination Of Gianni Versace: American Crime Story," the effect of prejudice and tolerance for expressions of it in our society.

That written, congratulations to you and all the acting winners for limited series!  Follow over the jump for the limited series that won Creative Arts Emmy Awards.

It turned out Herndl was the favorite, as he won Outstanding Cinematography for a Limited Series or Movie.  Watch his post-awards interview.


That was very matter-of-fact.  So were the Emmy winning sound mixing team ("Genius: Picasso") in the 2018 Creative Arts Emmys Press Room at first; then they loosened up.


Before hearing this team explain their process and reasoning, I would have picked either "Fahrenheit 451" or "Twin Peaks" as the favorite.  Afterwards, I understand how "Genius: Picasso" won Outstanding Sound Mixing for a Limited Series or Movie. 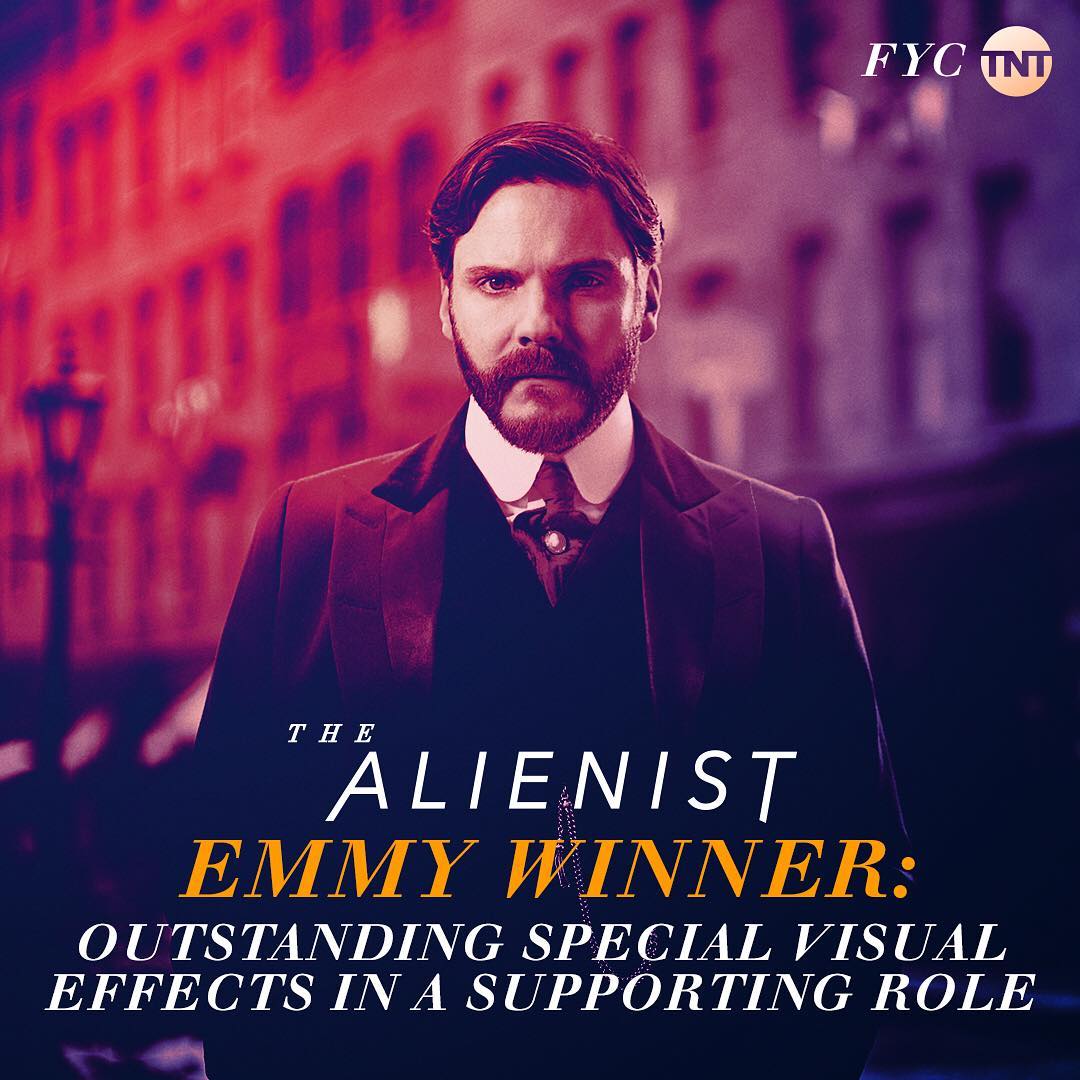 
When I submitted my Saturn Award television recommendations in February, I predicted that "'The Alienist'...will receive recognition at the Emmy Awards this summer and the Golden Globes and guild awards this coming winter, so the Saturn Awards may as well get a jump on it."  I'll have to wait three to four more months to see if the Golden Globes and various guilds make my predictions come true, but, wow, did the Television Academy ever make my prognostication look good for the Emmy Awards.*  In addition to Outstanding Limited Series, "The Alienist" earned nominations for Outstanding Cinematography for a Limited Series or Movie, Outstanding Main Title Design, Outstanding Period Costumes, Outstanding Production Design for a Narrative Period or Fantasy Program (One Hour or More), and Outstanding Special Visual Effects in a Supporting Role.  I think the story of catching a serial killer in turn of the last century New York deserved all of them.  As for whether it will any of them, I'll have to look at its competition first.

I made a half-hearted attempt at that in 'Westworld,' 'Game of Thrones,' 'The Handmaid's Tale,' 'Stranger Things,' and other speculative fiction nominees at the Creative Arts Emmy Awards.

Hope was not enough, as "The Alienst" won.  Watch Emmy winning visual effects team ("The Alienist") in the 2018 Creative Arts Press Room.


It's not just the digital visual effects that helped win the Emmy, but also the practical ones.  Watch and listen to The Incredible Special Effects Of “The Alienist” to hear why.

Luke Evans, who portrays John Moore in “The Alienist,” raves about the special effects that went into the highly-anticipated limited series.

I hadn't thought of the fake corpses of the victims, but given the gruesomeness of "The Boy On The Bridge," I can understand how they contributed to the win.

I'll return to the Primetime Emmy winners next month.  Stay tuned for posts about the nominees for the News and Documentary Emmy Awards, which will be held October 1, a series I began with Putin and Trump-Russia at the Emmy Awards.
Posted by Pinku-Sensei at 3:14 PM