'Westworld,' 'Game of Thrones,' 'The Handmaid's Tale,' 'Stranger Things,' and other speculative fiction nominees at the Creative Arts Emmy Awards

My longtime readers are probably asking if I'm going to post anything about "Westworld," "Game of Thrones," "The Handmaid's Tale," "Stranger Things," and other speculative fiction nominees at the Creative Arts Emmy Awards.  Tomorrow.  Stay tuned.

Based on the Wikipedia entry for this year's Creative Arts Emmy Awards, "Westworld" is up for the most awards tonight, 16, followed by "Game of Thrones" among speculative fiction series with 15, "The Handmaid's Tale" with 12, and "Stranger Things" with seven.  I will work through them in alphabetical order, beginning with acting with an interruption for animated programs before resuming with casting.

Ladies first with the nominees for Outstanding Guest Actress in a Drama Series, where there are four speculative fiction candidates, three from "The Handmaid's Tale" and one from "Game of Thrones."

Alexis Bledel won this award last year, but she has been promoted to a supporting role while Samira Wiley has been moved down to a guest role along with two other actresses in guest roles in "The Handmaid's Tale."  If the voting members of the Television Academy wish to honor "The Handmaid's Tale" again, I think they would pick Wiley.  However, they could split their vote and one of Davis, Rigg, or Tyson could receive the trophy instead.  I'd vote for Davis, but I'm not a member of the Television Academy; another split of their vote between Davis and Tyson could have Rigg sneak by.  They could do better, but they could do worse, too.

Now the men nominated for Outstanding Guest Actor in a Drama Series.

The speculative fiction nominee here is Jimmi Simpson as a young William AKA The Man in Black in "Westworld."  I was expecting Anthony Hopkins, but I suspect his episodes were too late in the season to earn enough nominating votes.  That's not to take anything away from Simpson; he deserved the nomination.  His winning will likely be another matter, as Gerald McRaney won last year and is my choice for favorite.  Also, F. Murray Abraham is an Oscar winner.  That might count for something.

Now for Outstanding Guest Actress in a Comedy Series, where I'll be a good environmentalist and recycle what I wrote in 'Saturday Night Live' leads Outstanding Variety Sketch Series nominations, again.

The speculative fiction fan in me wants this to go to Maya Rudolph, but I think it will between one of the hosts of SNL and Jane Lynch.  Yes, more "The Marvelous Mrs. Maisel."

Follow over the jump for the rest of the nominations of speculative fiction series, beginning with the animation nominees and a few winners. 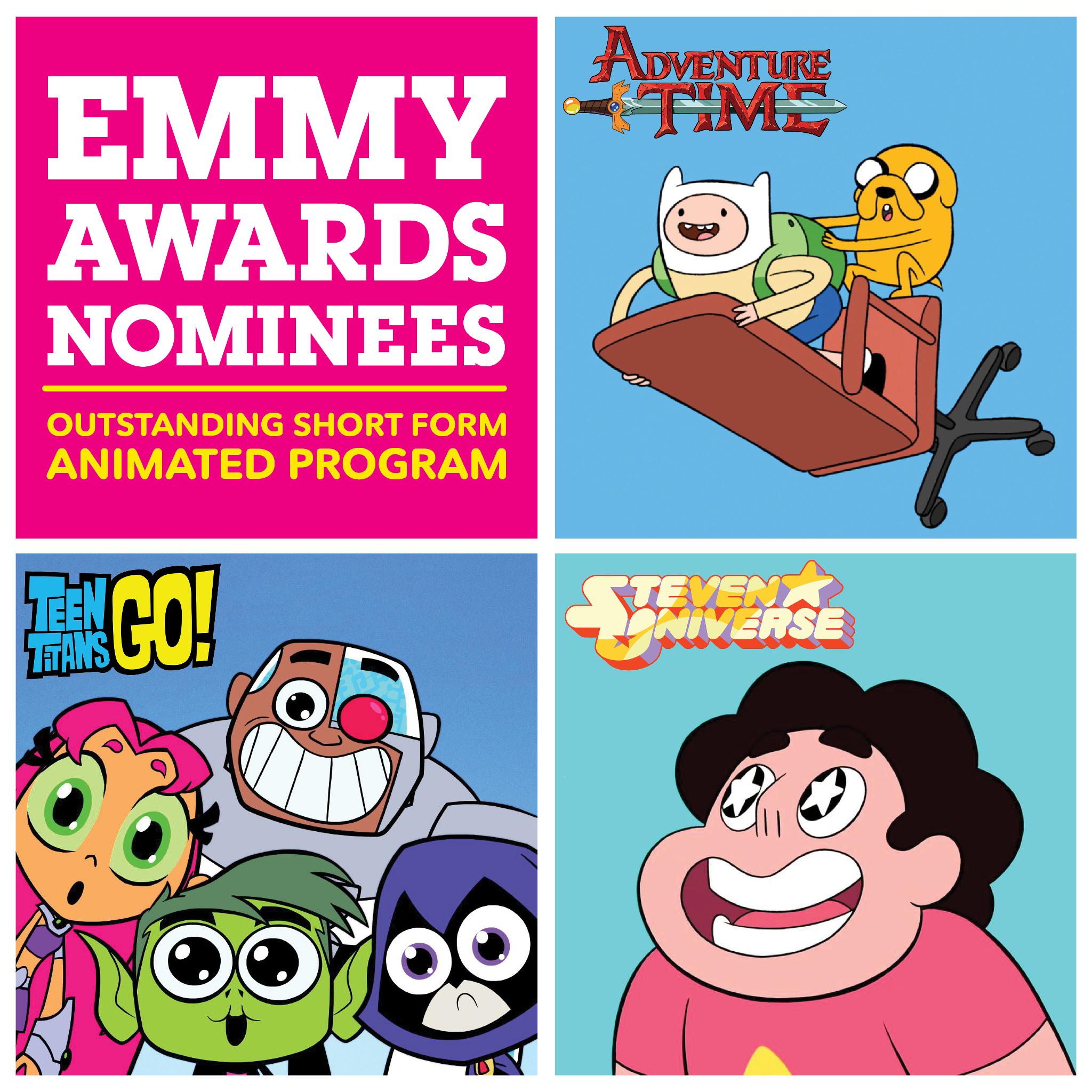 While I mentioned "Fahrenheit 451" earning a nomination for Outstanding Fantasy/Sci-Fi Costumes when I discussed the Outstanding Television Movie nominees, I didn't list the other nominees.  Time to correct that oversight.

This is a new category, having been split from Outstanding Period Costumes just this year.  Even so, it's possible to guess the favorite, as "Game of Thrones" won two years ago.  Still, I think all the nominees deserve their recognition in this category.

Among the top four speculative fiction shows, it's "Game of Thrones" vs. "Westworld" for Outstanding Hairstyling for a Single-Camera Series.

I'm not surprised that the episode of "Westworld" with the nomination for best costumes is the one with the nomination for best hair; "Akane no Mai" was gorgeous all around.  I also consider it the favorite, as it won last year.  That was without competition from "Game of Thones," which has been nominated multiple times but never won.  I think it's more likely that "The Marvelous Mrs. Maisel" or "GLOW" will pull off the upset.

I hope it's 'NASA JPL: Cassini's Grand Finale," but I wouldn't be surprised by any of them winning, especially the Google doodle, which more people probably saw than the other two.

Outstanding Creative Achievement In Interactive Media Within A Scripted Program includes two or three speculative fiction nominees, depending on how one classifies "Mr. Robot."

"Westworld" won last year and I hope it wins again.

When I watched the most recent season of "Westworld," I noticed that most of its main title was new and wondered if that would qualify it for a nomination for Outstanding Main Title Design.  It did.

I hope "Westworld" wins the second time around.

"Westworld" appears in both of the make-up categories for which it is eligible, beginning with Outstanding Make-up for a Single-Camera Series (Non-Prosthetic).

Best costumes, best hair, and best make-up -- as I wrote above, "Akane no Mai" was gorgeous all around.  On the one hand, "Westworld" won this last year.  On the other, it wasn't competing with "Game of Thrones," which won this category four of the previous five years, so I think the award is between the two HBO series.

Five of the six nominees for Outstanding Music Composition for a Series (Original Dramatic Score) are speculative fiction series -- wow!

I'm pleased to see "Once Upon a Time" and "Star Wars Rebels" up here with the rest, but I don't think they have much of a chance.  Instead, I think it's between "Marvel's Jessica Jones," which won Outstanding Main Title Theme Music two years ago, and "Game of Thrones," which earned a Grammy nomination.

As much as I like the theme to "The Tick," I think "Godless" is better.

All of the nominees for Outstanding Single-Camera Picture Editing for a Drama Series are speculative fiction series.

It's between "Stranger Things," which won last year, and "Game of Thrones," which won the two years before that.  "The Handmaid's Tale" would really have to pull a rabbit out its hat against both of them to even have a chance.

Once again, it's "Game of Thrones" vs. "Westworld" for the speculative fiction nominees in Outstanding Production Design for a Narrative Period or Fantasy Program (One Hour or More).

Unfortunately for both HBO series, "The Crown" is the returning winner and therefore the favorite with "The Marvelous Mrs. Maisel" being my pick to upset it.

Four of the five nominees for Outstanding Sound Editing for a Comedy or Drama Series (One-Hour) are speculative fiction shows, including the second nomination for "Star Trek: Discovery."

"Stranger Things" won the trophy last year, so it's the favorite, and "Game of Thrones" has won it twice before that, so I think it's the next best bet.

In a category dominated by comedies, "Star Wars Rebels" earned its third nomination for Outstanding Sound Editing for a Comedy or Drama Series (Half-Hour) and Animation.

This is a completely new category, so I have no history to go on.  Here's to hoping it helps "Star Wars Rebels."

All four of the top speculative fiction series are competing for Outstanding Sound Mixing for a Comedy or Drama Series (One Hour) with the science-fiction adjacent "Mr. Robot" rounding out the field.

The animated "Family Guy" joins the live-action comedies among the nominees for Outstanding Sound Mixing for a Comedy or Drama Series (Half-Hour) and Animation.

"Mozart in the Jungle" won this the past two year so I expect it to three-peat.

Outstanding Special Visual Effects is the province of speculative fiction shows, so of course all the nominees fit that description.

Oh, look, a nomination for "Lost in Space."  It should be happy just to be nominated, as the trophy will either go to last year's winner, "Westworld," or the the winner of the previous five years, "Game of Thrones."  I think the dragons will take it home this year.

Now, the last category, Outstanding Stunt Coordination for a Drama Series, Limited Series, or Movie."Game of Thrones" has won this twice, so it's the favorite, while "Westworld" was not even nominated last year.  "Marvel's The Punisher" or "The Blacklist" have better chances of pulling off the upset.

People who have been paying attention have probably noticed how many nominations the "Akane No Mai" episode of "Westworld" earned.  That was probably because of the behind the scenes video for the episode from HBO, which I thought was an effective bit of marketing to the Emmy voters.

Based on the seven nominations for this episode, it worked.  Let's see if it earns awards as well as nominations.  I'll have that beginning Tuesday.  Stay tuned.