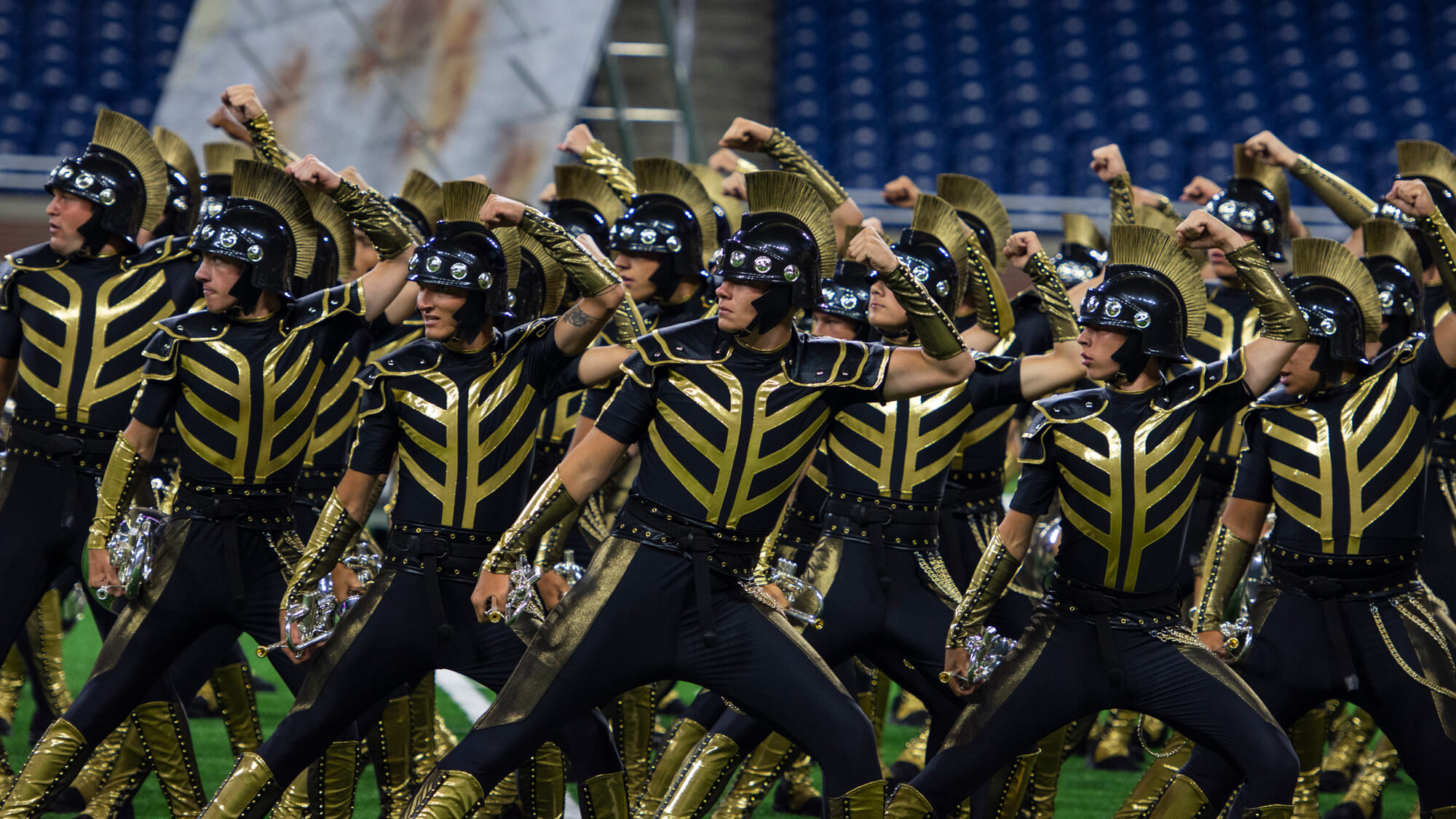 As I've already done for Iowa, New Hampshire, Nevada, and South Carolina, it's time to share some marching music for my readers to watch and listen while they are waiting for the results.  This time, it's a drum corps Super Tuesday as nine of the fifteen states and territories holding primaries and caucuses today have competitive drum and bugle corps.  No marching bands today!

I am proceeding roughly from east to west, moving time zone to time zone as polls close across the country.  In order, the states and their drum corps I am featuring are Massachusetts, North Carolina, Minnesota, Tennessee, Alabama, Texas, Colorado, Utah, and California.  I begin with the 2019 Boston Crusaders | Goliath representing Massachusetts.

Despite the biblical theme, this show has a patriotic element as it includes selections from "Hamilton."  May the candidates not throw away their shots, either!

While Carolina Gold is the first DCA corps I am featuring this cycle, it won't be the last, as two DCA corps represent Minnesota, three if one includes the now inactive Minnesota Brass, Inc., which I am.  In fact, the Minnesota corps are next, as it's time to move to the Central Time Zone.  Follow over the jump.

I miss these guys.

Moving down to Class A, I present Governaires 2017.

The Govenaires are now the best corps from Minnesota since MBI went inactive.

When I wrote 'The Grid' plus 2017 drum corps shows with speculative fiction themes, I only listed junior corps.  If I had included all-age corps, I would have listed this show as well.  Live and learn.


Moving down the Mississippi from Minnesota, Tennessee is also voting today and has a drum corps, Music City.  Watch 2014 Music City - Go West.


Heading all the way down to the Gulf Coast, Alabama is the next state in the Central Time Zone voting today with a competitive drum corps.  Watch Southwind Caged- DCI prelims 2019.


It's time to shift west, to a state that straddles the Central and Mountain Time Zones, Texas.  The leading corps from the Lone Star State is one I associate from my marching days with Pennsylvania, Crossmen.  Here they are performing their 2019 show, Valkyrie.

The other Texas corps is Genesis.  Watch 2019 Genesis | From the Ground Up.

My reaction to this video was "A literal wall of sound."

Moving west to a state entirely with the Mountain Time Zone with a competitive drum corps voting today, I present 2019 Blue Knights | ...I remember Everything from Colorado.

Continuing west in the Mountain Time Zone, the next competitive drum corps is Battalion from Utah.  Here is the corps' 2019 show, Humanity.

The Battalion performs its 2019 production - Humanity - at Mile High Showcase in Arvada, Colorado on July 24, 2019.

Battalion has never been to DCI Championships.  That will change this year, when the corps plans on coming to Indianapolis.

Now, the last state with competitive drum corps to close its polls today, California, which is in the Pacific Time Zone.  Four years ago, the Golden State's primary had its own entry.  This year, it's part of Super Tuesday, making both the importance of the day and the length of this entry even greater.  I could have quit by now!

As I did with both Minnesota and Texas, I will work my way down from the defending World Class DCI Champions, 2019 Blue Devils | Ghostlight.

Continuing on down the placements, I am sharing 2019 Mandarins | subTerra

Coming off their 2019 Rose Parade appearance is the next corps, Pacific Crest with their 2019 show, Everglow.

Now, a corps that one of the followers of the Coffee Party USA Facebook page requested, Gold from Lemon Grove outside of San Diego.  Watch 2014 Gold - The Journey.

I conclude with the corps from Bakersfield, a town where I lived for a year, Golden Empire 2018 - Open Class Prelims.


Whew!  That does it for this edition of marching music for a primary day.  I plan on returning next week for the Michigan and Washington primaries as well as the Democrats Abroad caucuses.  In the mean time, stay tuned for Marching Music Day and a follow-up post to both Super Tuesday and Mayor Pete packs up his campaign.  I may be on vacation, but the news is keeping me busy!
Posted by Pinku-Sensei at 3:47 PM