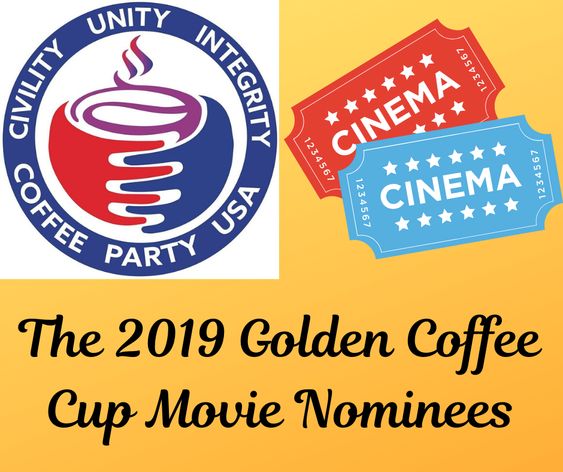 The members and volunteers of Coffee Party USA have voted on the best of the shortlist for the 2019 Coffee Party Entertainment Awards for movies, also known as the Golden Coffee Cups, so it's time to announce the nominees for the third annual edition of these honors.

Eight feature films from 2019 earned nominations. In descending order by number of nominations, they are "Bombshell" with six, "The Two Popes" with five, "Harriet" with three, "The Report" with two, and "1917," "Angel Has Fallen," "Jojo Rabbit," and "Just Mercy" with one each. "Bombshell," "The Two Popes," and "Harriet" garnered nominations both for Best Drama or Comedy about Politics or Government of 2019 (Best Scripted Political Movie) and in two or more acting categories, while "1917" and "Jojo Rabbit" earned a nomination for Best Scripted Political Movie and "Angel Has Fallen" and "The Report" collected their nominations in the acting categories.

In addition to Best Actor in a Political Film and Best Portrayal of a Government Official in a Film, Coffee Party USA is instituting a new acting award this year, Best Portrayal of an Activist or Concerned Citizen in a Film. As an activist organization, Coffee Party USA is using this award to recognize outstanding fictional examples of activists in cinema.

Coffee Party USA ia a 501c(4) nonprofit social welfare organization dedicated to empowering and connecting communities to reclaim our government for the people. To support its efforts, which include educating the public on our website and on our Facebook page, registering people to vote with our partners TurboVote and National Voter Registration Day, and reminding them to vote through our Voter Buddy program, please consider donating. A donation of $10.00 for ten years of Coffee Party USA is recommended. For those who wish to give at a higher level of support and be more involved in the organization, please consider becoming a member, which will allow you to vote for future Golden Coffee Cup nominees and winners. To do the valuable work of the Coffee Party, volunteer. Not only will Coffee Party USA thank you for it, so will the country!

Best Documentary about Politics or Government of 2019 (Best Political Documentary)

Best Actor in a Political Film during 2019

Best Portrayal of a Government Official in a Film during 2019

Best Appearance of a Government Official in a Documentary during 2019