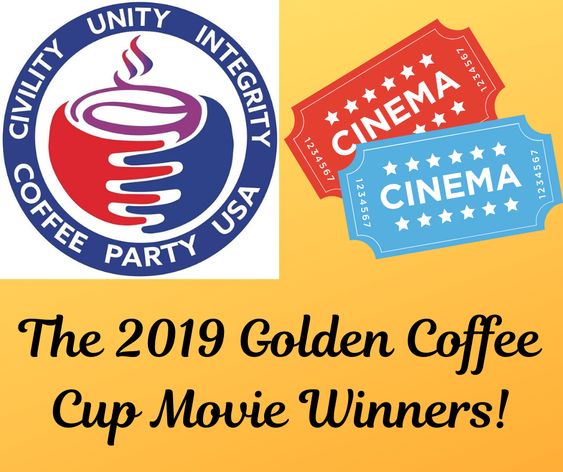 The members of Coffee Party USA have voted on the nominees for the 2018 Coffee Party Entertainment Awards for movies, also known as the Golden Coffee Cups, so it's time to announce the winners. "Harriet" swept the categories in which it was nominated, winning Best Drama or Comedy about Politics or Government of 2017 AKA the Best Political Scripted Movie, while Cynthia Erivo won two awards for playing Harriet Tubman in "Harriet," Best Portrayal of an Activist or Concerned Citizen in a Film and Best Performance by an Actor in a Political Film, for a total of three awards. Annette Bening won the vote for Best Portrayal of a Government Official in a Film playing Senator Dianne Feinstein in "The Report." "Apollo 11" won two awards, first for Best Documentary about Politics or Government and the second for U.S. President John F. Kennedy as Best Appearance of a Government Official in a Documentary. Congratulations to all the winners for depicting what the members of Coffee Party USA considered to be the best of politics and government in film during 2019!

Movies are not the only type of entertainment Coffee Party USA recognizes. The members will also be voting on the nominees and winners of the Golden Coffee Cups for television programs and their performers that demonstrate the best in politics and government on the small screen. Watch for an announcement of the shortlist of possible nominees from the 2018-2019 television season and an invitation to watch them next week, much like Coffee Party USA invites you to watch these political movies while staying safe at home, followed by the nominees of the 2019-2020 season in the summer.

Coffee Party USA ia a 501c(4) nonprofit social welfare organization dedicated to empowering and connecting communities to reclaim our government for the people. To support its efforts, which include educating the public on our website and on our Facebook page, registering people to vote with our partners TurboVote and National Voter Registration Day, and reminding them to vote through our Voter Buddy program, please consider donating. A donation of $10.00 for ten years of Coffee Party USA is recommended. Ten dollars will also buy our partner stamp with Stamp Stampede to stamp money out of politics. For those who wish to give at a higher level of support and be more involved in the organization, please consider becoming a member, which will allow you to vote for future Golden Coffee Cup nominees and winners. To do the valuable work of the Coffee Party, volunteer. Not only will Coffee Party USA thank you for it, so will the country!

Best Documentary about Politics or Government of 2019 (Best Political Documentary)

Best Actor in a Political Film during 2019

Best Portrayal of a Government Official in a Film during 2019

Best Appearance of a Government Official in a Documentary during 2019

Cross-posted from Coffee Party USA's blog.
Posted by Pinku-Sensei at 12:19 AM