Drum corps maypoles from 1978 for a drum corps May Day

A Happy drum corps May Day to my readers!  Today, I found out that a request I had been making for years had been fulfilled.

As for next year, I can post videos of 2013 Phantom Regiment with their fake trees, upload clips of 1978 Guardsmen and 1978 and 1979 Santa Clara Vanguard for actual drum corps maypoles in motion, or abandon the idea and return to an idea I've been avoiding for four year[s], the socialist meaning of May Day.  The first and last ideas have videos, while the middle idea does not.  I rather hope someone else uploads them instead, as I'm lazy.  Anyone, anyone, Bueller, anyone?

"Ferris Bueller" didn't just take a day off; he took a year off.  Here's to hoping that either someone plays the role of "Bueller" or that one of this year's shows takes up the slack.

"Bueller" showed up last year.  Before I get to his or her contribution, I'm sharing Drum Corps International's Spotlight: 1978 Guardsmen.


Sorry about the lack of sound.  DCI has apparently had copyright issues twice, first with the original show music and then with the supposedly royalty-free music they used for the background.  Just the same, this video made for a great preview image!

Now for "Bueller's" contribution.  A little more than two weeks after I made my plea last year, High-Stepper uploaded Top 100 Highest Rated DCI Shows #10: Santa Clara Vanguard 1978.  It shows the maypole being put away during "If You Believe" instead of the full dance during concert, but at least it's a drum corps maypole in motion.


The following image from the very first drum corps May Day post shows the maypole in action. 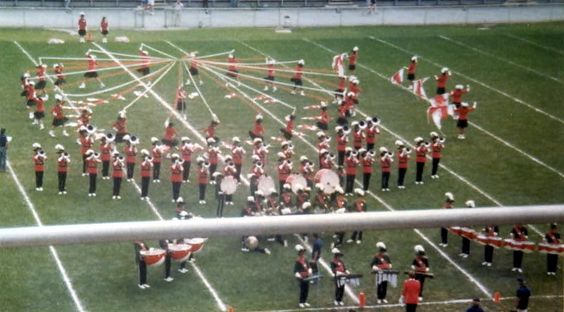 Insert joke about them wearing red, playing Soviet-era music (Aram Khachaturian's "Gopak"), and being the vanguard of the [proletariat] here.*
...
*The Vanguard actually was a working-class organization at the time, so the joke is more apt than one might think.  The ex-girlfriend I mention here from time to time marched in them from 1977-1979--in fact, she may be in the photo--came from a working-class family and described how most of her fellow corps members shared her background.

That's as close to the "idea I've been avoiding for...year[s], the socialist meaning of May Day" as I wish to come today.  Thanks to High-Stepper for helping me not have to go any closer to it this year.  Next year may be another story.
Posted by Pinku-Sensei at 11:36 AM