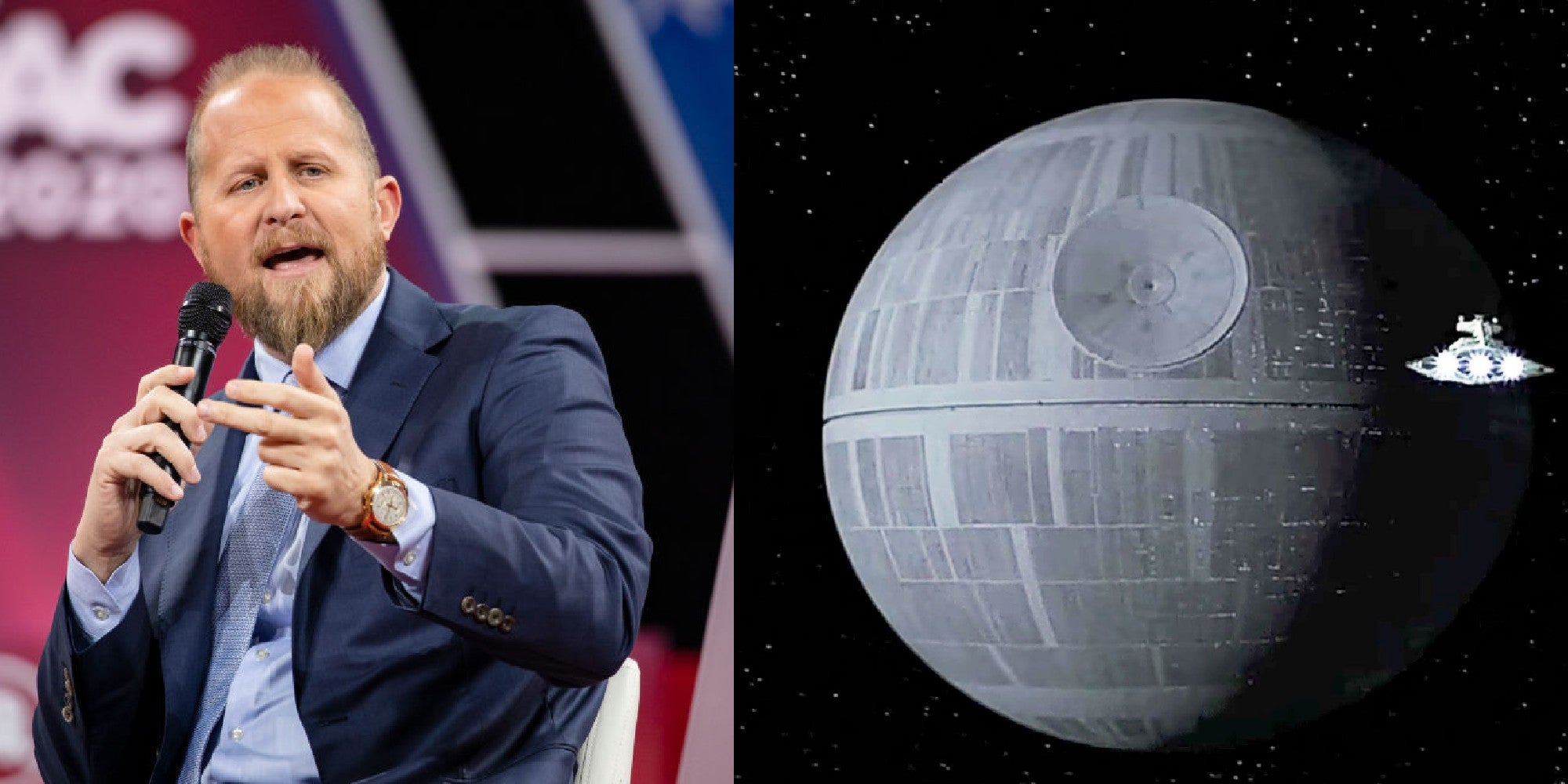 When I told my readers to "Stay tuned for the retrospective about this blog on Twitter I promised three times to observe Throwback Thursday," I had just seen that "Death Star" was trending on Twitter. I thought I was done with Star Wars after Star Wars Day and Star Wars drinks and music for the Revenge of the Sixth. Guess not.

Brad Parscale, a digital marketing expert turned Trump champion, used Twitter to declare that the Trump re-election campaign had constructed a “Death Star”, a reference to the fictional Star Wars space station capable of destroying planets with a big laser.

“For nearly three years we have been building a juggernaut campaign (Death Star). It is firing on all cylinders. Data, Digital, TV, Political, Surrogates, Coalitions, etc,” Parscale said.

He added, ominously: “In a few days we start pressing FIRE for the first time.”As USA Today reported, "Biden team notes it gets blown up" and "The Star Wars political battle lit up Twitter."


Parscale, who also spent Thursday tweeting out anti-Biden ads, said reporters gave him the idea, and he is happy to oblige.

"I didn’t give our campaign the name, Death Star, the media did," he tweeted in a follow-up. "However, I am happy to use the analogy. The fact is, we haven’t used it yet. Laugh all you want, we will take the win!"

Andrew Feinberg, a reporter for Newsweek responded that Parscale got the source of the name wrong.


No, “the media” did not come up with the “Death Star” name for the Trump 2020 campaign. A “Republican strategist” used it while speaking to @mckaycoppins on background for a story in which @parscale appears prominently. 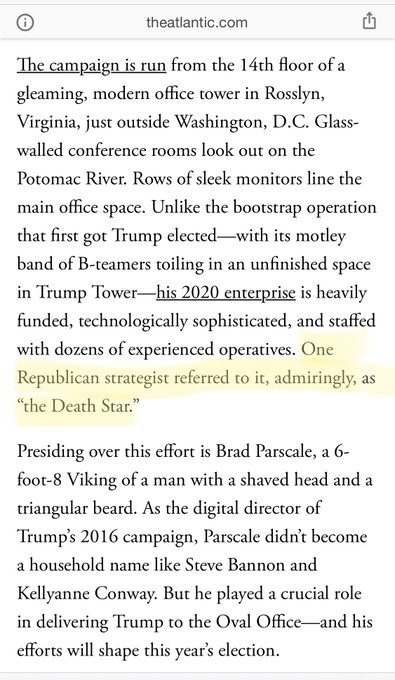 More tweets corrected Parscale's. Gary Whitta, who co-wrote "Rogue One: A Star Wars Story," also tweeted a response: "You do understand that the people who built the Death Star were the bad guys, right? Also they lost." Whitta should know.

Journalist Judd Legum included the following comment in his retweet: "Nicknaming your presidential reelection campaign 'Death Star' in the middle of a pandemic that has already killed 70K+ people is an interesting choice." First, no kidding. Second, the COVID-19 pandemic once again sweeps up all issues into itself.

Finally, Tommy Vietor, a national security spokesman for President Barack Obama, thought there might be a method to Parscale's madness: "Hey maybe Brad Parscale knows how Star Wars ends and he knows that a million WELL ACTUALLY tweets drives up engagement and virality of content." Maybe. That would be the smartest interpretation, which rarely happens with this Adminstration, but it's possible. Either way, I now have a new nickname for Parscale — Grand Moff Brad. It makes for a good match with Darth Trump.

Follow over the jump for the top tweets featuring links to this blog from the ninth year of Crazy Eddie's Motie News.

Projection is the Right's favorite defense mechanism had the most impressions of any tweet with a link to an entry from this blog with 2,201.

Michigan's Representatives and Senators react to drone strike on Iranian General had the most impressions of any tweet with a link to an entry posted during the blogging year with 1,418 engagements.

No passing the torch, as Eric Swalwell drops out of presidential contest had the most engagements of any tweet with a link to the blog with fifteen, including ten likes, two link clicks, and one reply.

Hipcrime Vocab on the Super Bowl had the most link clicks from a tweet with ten.

Italian military providing inspiration during coronavirus lockdown for The Ides of March had the most link clicks to an entry posted last year with six.

No passing the torch, as Eric Swalwell drops out of presidential contest and Tariffs from the U.S.-China trade war are likely to accelerate the Retail Apocalypse tied for most likes with ten, although the former did it in one tweet while the latter required two.

'Meet The Press' earns a Cronkite Award for its coverage of climate change had the most retweets of any tweet with a link to the blog last year with four.

The Wombats singing 'Ice Cream' for a happy Souther on National Ice Cream Day again! and 'The Facebook Dilemma' earns two Emmy nominations tied for most replies on Twitter with each receiving six replies in one thread.

Tariffs from the U.S.-China trade war are likely to accelerate the Retail Apocalypse had a combined total of four replies in three threads from two tweets.

That's it for the blog's year on Twitter. I plan on concluding this series tomorrow, Flashback Friday, with the most saved pins from this blog during the blogging year that concluded March 20, 2020. Stay tuned.

Previous posts in this series.
Previous retrospectives about Twitter.