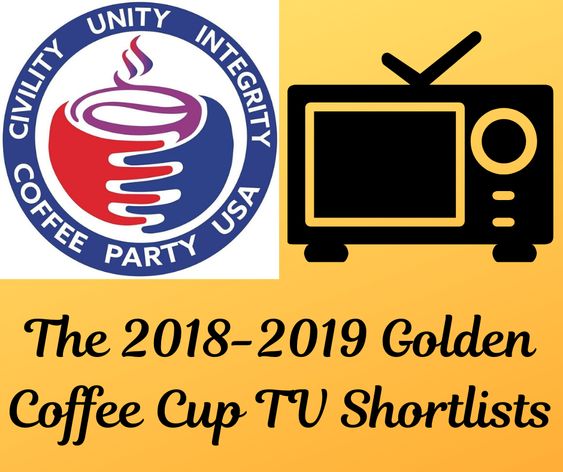 Hey, all of you binge-watching your guilty pleasure shows while staying safe at home, relaxing after working from home, returning for work after wearing a mask all day, or just stressed out from the real world! I have another suggestion to make your time in front of the big-screen TV in the living room, the slightly smaller screen in the bedroom, or even holding your tablet or smartphone work to help your appreciation of politics and government on television and then apply your understanding to help Coffee Party USA in one of our projects.

Last month, Coffee Party USA invited you to watch these political movies while staying safe at home, which led to the 2019 Coffee Party Entertainment Awards for movies, AKA the Golden Coffee Cups for Movies. It is now time for the next phase of these awards.

The members will also be voting on the nominees and winners of the Golden Coffee Cups for television programs and their performers that demonstrate the best in politics and government on the small screen. Watch for an announcement of the shortlist of possible nominees from the 2018-2019 television season and an invitation to watch them next week, much like Coffee Party USA invites you to watch these political movies while staying safe at home, followed by the nominees of the 2019-2020 season in the summer.

Follow over the jump to read the shortlists for television shows in five categories along with a two-part activity involving them.

I present the shortlists for the Golden Coffee Cups for Television, beginning with the shortlist for Best Drama Series about Politics and Government.*

Last year's winner, Mindhunter, is not eligible this year, as it didn't air an episode between June 1, 2018 and May 31, 2019, the eligibility period for these awards. That means there will be a new winner this year.  Which series do you think deserves the honor?

Next, the shortlist for Best Comedy Series about Politics and Government.

Veep is the returning winner. Do you think it's still the best political comedy on U.S. television?

Now, the shortlist for Best Miniseries or Movie for Television about Politics and Government.

Black Mirror is the returning winner. Do you think its episodes are still the best short movies about politics and government for television?

Because this is a new category, there is no obvious favorite. Which is yours?

Finally, the shortlist for Best Comedy, Drama, Miniseries, or Movie for Television about Fantastic and Futuristic Politics and Government.

Marvel's Agents of S.H.I.E.L.D. won this category last year. Do you think it's the best speculative fiction series about politics and government?

The first part of the activity is to stream as many of these shows between now and June 30, 2020 to see which have the best portrayals of politics and government on television. The second is to become a member of Coffee Party USA by June 30, 2020, which you can do for as little as $30.00 per year. That's because the members will also vote on the nominees and winners this year. That means you!

That's your two-part activity. Now, have fun watching television while supporting the work of Coffee Party USA, whose core values include continuous learning on behalf of an informed citizenry, joining Coffee Party USA, and voting on the nominees!

*Shortlist was compiled from nominees at the 2019 Creative Arts and Primetime Emmy Awards, Golden Globes, Critics' Choice Awards, Writers Guild of America Awards, and Saturn Awards plus nominees from last year's awards with episodes airing during the eligibility period.