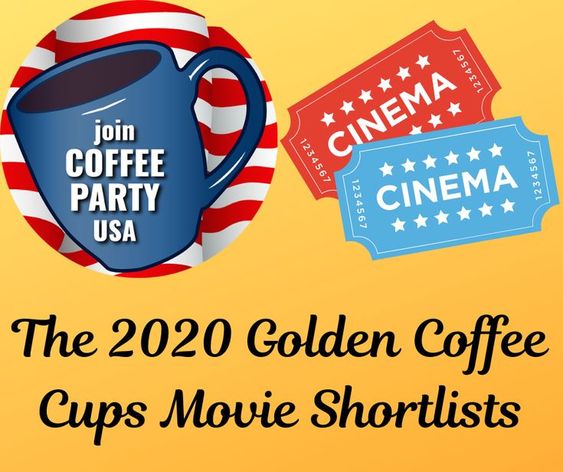 I closed Coffee Party USA announces the 2019-2020 Golden Coffee Cup Television Winners! by telling followers of the Coffee Party to stay tuned for the first stage of the next awards.

With the 2019-2020 television season out of the way, the members and volunteers of Coffee Party USA will move on to the best political movies of the 2020 awards season. Watch for the posting of the shortlists for the show categories on our blog along with an invitation to stream them while staying safe at home.

It's time to announce the shortlists for scripted movies and documentaries for the Golden Coffee Cups Movie Awards, which recognize the best depictions and representations of politics and government on the big screen during the past year's movie season as defined by the Motion Picture Academy. Because the Motion Picture Academy extended the eligibility period for this year's Oscars as a result of the pandemic, some movies released during January and February of 2021 appear on the shortlists.

I compiled the shortlist for the Best Drama or Comedy about Politics or Government of 2020 (Best Scripted Political Movie) using nominations from the Academy Awards, Golden Globes, Critics Choice Awards (including the Critics Choice Super Awards), Screen Actors Guild Awards, Directors Guild of America Awards, Producers Guild of America Awards, and People's Choice Awards. All movies on the shortlist examine a political theme or take place in a government setting, including public safety, public education, and the military.

Another Round
Bloodshot
Borat Subsequent Moviefilm
Da 5 Bloods
Greyhound
Hamilton
Judas and the Black Messiah
Mulan
Never Rarely Sometimes Always
One Night in Miami...
Project Power
Quo vadis, Aida?
Tenet
The Hunt
The Letter Room
The Little Things
The Man Who Sold His Skin
The Mauritanian
The Midnight Sky
The Outpost
The Present
The Prom
The Way Back
The Trial of the Chicago 7
The United States vs. Billie Holiday
Two Distant Strangers

Next, the shortlist for the Best Documentary about Politics or Government of 2020 (Best Political Documentary). In addition to the awards shows I listed for Best Scripted Political Movie, I included nominated documentaries from the Critics Choice Documentary Awards, Cinema Eye Awards, and the Emmy Awards — television documentaries are eligible for the movie awards, as there is no corresponding television category. Like the scripted movies, the shortlisted documentaries examine a political theme or take place in a government setting, including not only public safety, public education, and the military, but also international sports because of its politicized nature.

Best Documentary about Politics or Government of 2020 (Best Political Documentary)

76 Days
A Concerto Is a Conversation
A Love Song for Latasha
All In: The Fight for Democracy
Assassins
Athlete A
Boys State
City Hall
Coded Bias
Colette
Collective
Crip Camp
Do Not Split
Feels Good Man
Hunger Ward
I Am Greta
John Lewis: Good Trouble
MLK/FBI
Mr. Soul!
Notturno
Rebuilding Paradise
Rising Phoenix
The Fight
The Last Ice
The Social Dilemma
The Way I See It
Time
Totally Under Control
Welcome to Chechnya

The Coffee Party invites its volunteers and followers to stream these movies to encourage their appreciation of politics and government in film. It also invites its volunteers and readers to watch for the second installment of the movie shortlists, which will recognize the best performers in scripted political movies and appearances by public officials in documentaries.

Coffee Party USA is a project of the Bridge Alliance Education Fund, the public education arm of Bridge Alliance, a coalition of 100 organizations working together for a thriving, just, and healthy democracy based on a culture of inclusivity and equity. Readers can support the Coffee Party's and Bridge Alliance's work by becoming a Friend of Bridge, which is tax deductible. Follow the Coffee Party at our website and on Facebook, Twitter, and Instagram.

Modified from the original at Coffee Party USA's blog.