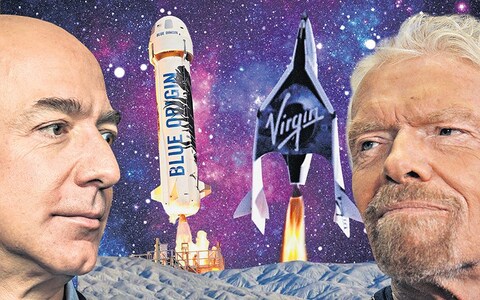 I told my readers to "stay tuned for a post about Richard Branson and Jeff Bezos going into space" in the conclusion to Apollo 14 50 years later for Moon Day 2021, so I'm following through today with the older story, Richard Branson makes historic spaceflight reported by ABC News.

The billionaire is now the first person to reach the edge of space in his own personal spacecraft.

This story wouldn't be complete without Elon Musk making a cameo.

ABC News' segment was more commentary about the event than reporting of the flight itself. NBC News showed more of the excursion in Highlights From Richard Branson’s Virgin Galactic Flight Into Space.

Watch highlights of Richard Branson's successful flight into space aboard the Virgin Galactic spacecraft, and receiving his astronaut wings after the launch.

The video began with Chris Hadfield awarding Branson and his crew and passengers their astronaut wings. They qualified, as Branson's vehicle Unity reached a maximum altitude of 282,773 feet or 53.56 miles (86.19 kilometers) and the Wikipedia entry for the Kármán line states "The U.S. Armed Forces definition of an astronaut is a person who has flown higher than 50 miles (80 km) above mean sea level, approximately the line between the mesosphere and the thermosphere." But did they really go to space? That depends.

Theodore von Kármán, after whom the Kármán line was named, originally calculated the lower boundary of space as 275,000 feet, 52.08 statute miles, or 83.81 kilometers (km) above mean sea level. By that criterion, Branson and his associates certainly reached space. However, that's not how either the Federal Aviation Administration (FAA) or the Fédération aéronautique internationale (FAI) see it. Both of those bodies consider the Kármán line to be 100 km (54 nautical miles, 62 statute miles, or 330,000 feet) above mean sea level. Aeronautics/aviation occurs below that altitude, while astronautics/space travel occurs above it. That's why the FAA had to approve Virgin Galactic flying passengers to "the edge of space," not space itself.

Bezos's trip yesterday was much less ambiguous about going to space. Follow over the jump for two videos about it.

21 years after founding Blue Origin, Jeff Bezos achieved his space dreams. Bezos was joined by 18-year-old Oliver Daemen and 82-year-old Wally Funk, who are now the youngest and oldest to reach space, and his brother Mark.

As the video stated, Bezos' craft achieved an altitude of 65.8 miles, so it reached space by all the criteria I listed above — no dispute about that! On the other hand, Bezos created a controversy by thanking all the Amazon customers and employees, which came off as tone deaf while being one of the rich avoiding paying taxes. Stephen Colbert made that one of his first punchlines in Meanwhile... Wally Funk Is The Star Of Bezos' Blue Origin Space Mission the night before.

Meanwhile... While Jeff Bezos deflects questions about the purpose of his space mission, astronaut Wally Funk has emerged as the real star of the Blue Origin crew.

Congratulations to the Bezos brothers, Funk, and Daemen on their achievement, but I would like Bezos and Amazon to pay more taxes, too. Also, the "Mercury 13" story is not as straight-forward as Colbert and NBC News presented it, but that's a subject for another day and doesn't diminish Funk's accomplishment. Instead, I will conclude by pointing out that Branson and Bezos are building on the legacy of the X-15 spaceplane and Mercury-Redstone suborbital flights 60 years ago, although both of those flew faster and higher. I'm not sure Virgin Galactic will break the records set by the X-15, but I expect Blue Origin will eventually send humans into orbit. I look forward to that.
Posted by Pinku-Sensei at 12:06 PM