U.S. birth and fertility rates and life expectancy all fell in 2020 for a late World Population Day

A belated World Population Day to my readers! When I decided "Doom in the form of falling birth rates can wait" on Father's Day weekend, I thought today would be a more appropriate occasion to tackle the subject, as I did last year. On that note, I begin by sharing Bill McBride, who wrote U.S. Births decreased in 2020, "Lowest number of births since 1979" in Calculated Risk two months ago.

From the National Center for Health Statistics: Births: Provisional Data for 2020. The NCHS reports:

Here is a long term graph of annual U.S. births through 2020. 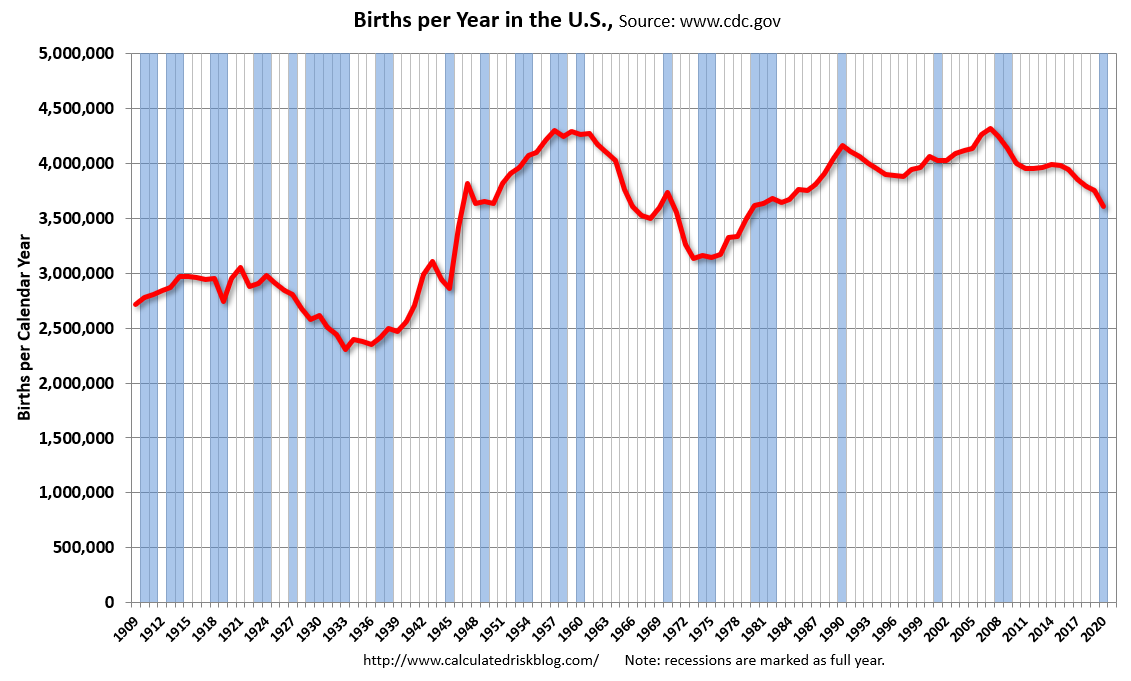 New data show that the birth rate in the United States dropped significantly for every major race and age group during the past year. Experts not only blame uncertainty over coronavirus for part of the decline but also say the U.S. “COVID baby bust” reflects long-running trends in other developed nations. VOA’s Laurel Bowman has that story.

As I wrote about retail, the pandemic has accelerated existing trends in fertility, not caused them.

While McBride and VOA News reported the above in May, the story has continued to make news. Follow over the jump for two more video reports from local TV stations, including Detroit's own WXYZ, plus an update on falling life expectancy.

The national birth rate is on a decline and experts say there are several reasons why.

The video presented a fairly thorough listing of the contributing factors to the ongoing decline in birth rates as well as the likely outcomes, both positive and negative. It also addressed falling life expectancy in the U.S., which I'll address after sharing WXYZ's US fertility rates drop significantly. The first half is about Detroit's flooding late last month, so skip ahead to 5:51 for the headline report.

Parents have a lot to juggle even in good times, throw in a pandemic and it takes a toll. "Just the idea of how am I going to adjust to this new world, but also adjust to taking care of a baby," said Tiffany Murray, therapist at Nature's Playhouse in Ferndale. It's a concern Tiffany often hears, she leads free parent support groups and offers one-on-one counseling.

In addition to the economic and social issues VOA News and KSHB-TB both raised, WXYZ mentioned a biological cause for lowered fertility, contaminants in the food supply and environment. That reminds me of the fertility crisis in "The Handmaid's Tale," another sign that we live in science fiction times. That's a long-time issue I might return to later. For now, I'm sharing PBS NewsHour's U.S. life expectancy sees 'massive' decline, especially in Black and brown communities.

A new study found that between 2018 and 2020, U.S. life expectancy decreased by the biggest margin since World War II. The pandemic took an outsized toll in America compared to other countries, with life expectancy as a whole dropping by nearly two years. But for Black and brown Americans, the toll was even worse. William Brangham discusses the study's findings with lead author Dr. Steven Woolf.

In addition to Dr. Steven Woolf discussing systemic racism making the pandemic worse for minorities, William Brangham brought up the role of the opioid epidemic in lowering life expectancy during the past decade. Both serve as arguments that returning to the pre-pandemic normal isn't good enough.

I conclude by being a good environmentalist and recycling what I wrote for CNBC asks 'Is The U.S. Running Out Of People?'

Second, increased population is bad for the environment, as expressed by the variable P in I=P*A*T "where I is impact, P is population, A is affluence, and T is technology." Impact increases as both population and affluence increases; both drive up demand for resources and create more waste and pollution. Therefore, keeping population down will help the environment. By keeping human population below the carrying capacity for our species, it helps people as well.

Third, increasing educational and economic opportunities for women is the number one way to decrease birth rates and keep them down, although increasing economic security might put a floor under the declining birth rates. Women's education and a stronger economy will also increase affluence, which will increase impact if more efficient technologies don't counteract both affluence and population.

Fourth, I use the example of Japan's use of robots as a strategy to counteract a declining population. As the video points out, robots are not consumers, so they don't contribute to the economy through consumption, only through investment.

Fifth, while more males are born than women, women outlive men. I show that to my students when I lecture about age structure. That means the U.S. economy will increasingly rely on the consumption of older women.

Sixth, if not enough babies are born in the U.S. to meet our job demand, the country can allow more immigration. I'm O.K. with that, but Donald Trump became president in large part because many Americans weren't and still aren't. That's why, when one of my students asked in 2015 if the U.S. would ever adopt Chinese population policies, I responded no, that's not the American way. If the U.S. thinks it has an overpopulation issue, it would restrict immigration. The next week, Trump rode down the escalator and denounced immigrants. This is one of those cases where I hate being proved right.

The seventh and final point returns to the idea of carrying capacity and environmental footprint, a concept I cover on Earth Overshoot Day. The bad news is that if all 7.8 billion of us consumed like Americans currently do, humans would need five Earths to support the species sustainably. As much as I like science fiction ideas, there aren't four other planets and large moons to terraform, not that we have the technology to do so and not that it would solve our immediate consumption issues. The good news is that the experts interviewed think that population will peak in 40-50 years and start declining. If the planet and the societies and economies that depend on it can support the peak population then, it should be able to support the declining human population on the way down. This depends on more efficient technologies, the T in I=P*A*T, extracting resources and reducing waste more sustainably. The Crazy Eddie in me approves, although I'm worried it may not happen...

I have been in favor of zero population growth for as long as I can remember. However, I'm not sure the U.S. economy is set up for a stable or slowly declining population, a point I made in the Hipcrime Vocab: Why Slowing Population Growth is a Problem. We are going to have to figure how to do so. Otherwise, I might live long enough to experience the wisdom of the saying "Be careful what you wish for; you might get it." 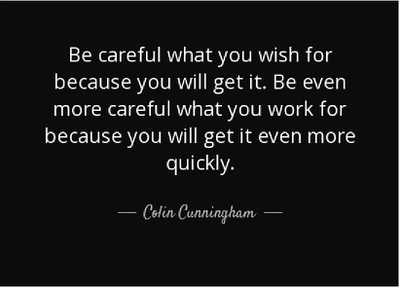