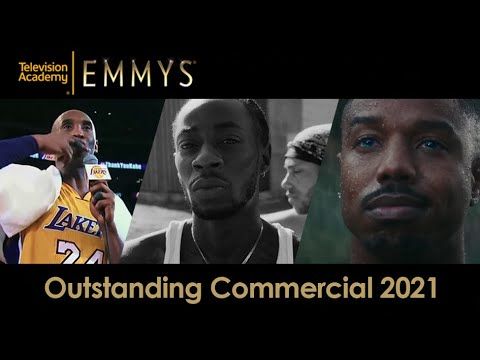 It's time to begin my Emmy coverage with the nominees for Outstanding Commercial. I felt a bit disappointed when I first looked at the nominations in this category because I didn't see any obvious public service announcements (PSAs) on the list. Then I watched 73rd Emmy Awards | Outstanding Commercial 2021 from ADdictive and realized at least one was hiding in plain sight.

I expected "Beats by Dre 'You Love Me'" to be a music commercial based on the creator. Instead, it's a PSA about diversity, acceptance, and anti-racism, which puts it in the same category as "The Talk," which won this category in 2018. and last year's nominee "The Look." Never have I been so pleasantly surprised to relearn "Don't judge a book by its cover."

Nike's two nominees continue the athletic footwear and apparel maker's brand campaign of using sports to inspire its customers while featuring a diverse array of athletes to bolster its appeal. That yielded a win two years ago for "Dream Crazy." I think it might do so again, most likely for "You Can't Stop Us." I expect the message of sports being a metaphor for victory over the pandemic will garner a lot of votes, especially when voting is happening during the Summer Olympics.

The three technology company ads concentrated more on selling products than making social statements, although all three had diverse casts. I found Apple's AirPod Pro commercial to be the most abstract of the three, using whimsy and fantasy to sell its product, which still featured prominently. In contrast, I thought the Apple Watch Series 6 ad to be the funniest and most concrete of the field. I laughed harder and harder each time one of the actors said "It already does that." I also thought it was the best example of living in science fiction times. As for Amazon's Alexa ad, I thought it was the second funniest and also the best example of "sex sells" among the nominees, although it subverted it using the female gaze instead of the usual male perspective.

That's it for this year's Outstanding Commercial nominees. Stay tuned for more Emmy coverage, most likely continuing with the documentary and nonfiction nominees.
Posted by Pinku-Sensei at 12:21 PM