Reactions to the U.S. Government report on UAPs for World UFO Day 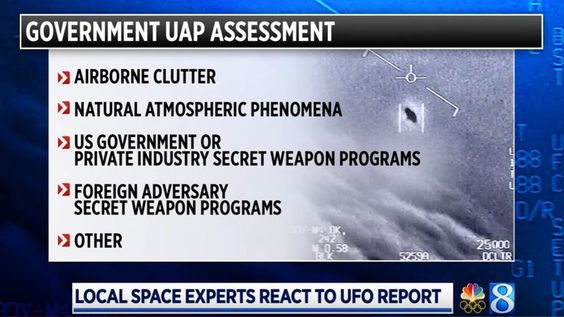 I can see why two different UFO Days; both are important in the early history of the phenomenon and should be recognized. National Day Calendars singled out today's observance by writing "The creators of the July 2nd event launched it to raise awareness of UFO sightings and remove speculation from them." That makes me feel better about postponing my observance from June 24 to today, which I based on reports that the House Intelligence Committee's report on Unidentified Aerial Phenomena (UAPs) would come out later that week. It did, as CNET reported in The Pentagon UFO report explained on June 26.

Are they aliens? Spy planes? What *are* those unidentified aerial phenomena we've been seeing lately? We break down the report commissioned by Congress to get to the bottom of UAPs and the people who report them.

CNET not only presented a good summary of the findings, but also an excellent timeline of how and why this reported ended up being produced. For some reason, I'm not surprised it started off with Marco Rubio adding the request to a budget bill. His doing so adds to the ambivalence I feel about the subject.

On the one hand, I feel the same about addressing the official interest in UFOs as I do about "Fauci's emails and...the Wuhan lab-leak hypothesis, two narratives that I want to give as little attention to as possible." On the other, I have described this blog as having a "science fiction slant" on its Facebook page, so writing about the topic is on brand.

I hope this is a case of a stuck clock still being right twice a day, just as Senator Rubio is on Daylight Saving Time. On the other hand, it might end up being like his positions on gun control and Cuba, which I disagree with. Only time will tell, although the kind of supporters the report has makes me wonder and worry.

Follow over the jump for more news reactions to the report.

When stargazers gather at the James C. Veen Observatory in Lowell, they’re watching the skies for things that can be explained by science.

WOOD-TV repeated what CNET reported as the likely causes: airborne clutter, natural atmospheric phenomena, secret weapon programs (domestic or foreign), and "other," which I used for the preview image. What most concerned politicians and other government officials was the possibility of UAPs being sightings of secret weapons programs. PBS NewsHour explored that angle in We may not know if aliens exist, but UFOs still pose a national security risk.

A highly anticipated report from U.S. intelligence released Friday focuses on unidentified aerial phenomenon or UAPS, commonly known as UFOs. The report from the Office of the Director of National Intelligence concludes that unidentified objects clearly pose a risk to flight and a national security threat to the U.S. But the larger question about alien life remains unanswered. John Yang reports.

If many UAPs are secret weapons programs, especially foreign ones, that's a cause for concern.

John Michael Greer thinks that UAPs being secret weapons programs is the most likely possibility, stating so most recently in last month's Toward the Breaking Point. In fact, he thinks it's a cover story for U.S. weapons development. While I'm not sure about the cover story part, I do think secret weapons programs are a likely explanation for many sightings. For example, the one UAP sighting I had almost certainly was one of an Osprey flying at night while it was still being tested and developed — nothing extraterrestrial or paranormal about it, although it certainly might confuse people unfamiliar with the aircraft. Here's an image of an Osprey at night to show my readers what I mean.

What would you think if you didn't already know what this was?

What most interested the general public was "other," specifically the possibility of UAPs being alien spacecraft. MSNBC told its viewers to See Neil DeGrasse Tyson Debunk 'Alien Believers' After Biden Pentagon's UFO Report.

How should we assess evidence of aliens or intelligent life? MSNBC’s Ari Melber interviews astrophysicist Neil deGrasse Tyson and former CIA director John Brennan about that challenge in the wake of a new Pentagon report. Brennan says the U.S. must “try to understand what is unexplainable,” while Tyson expounds on his steep skepticism of the evidence offered while encouraging believers to "go catch the aliens" if they can.

I don't doubt that there may be life elsewhere in the universe. In fact, I expect there is. That's a long way away from accepting that they are visiting Earth right now and that UAPs are their spacecraft. Extraordinary claims require extraordinary evidence and Dr. Tyson isn't buying the evidence. In fact, he adds glitches in the cameras and recording systems being used by the U.S. Navy to the "other" causes. That's a reasonable possibility, too.

As for science fiction influencing how people interpret what they see, I'm all in favor of examining that. It's one of the reasons why I cover entertainment as much as I do. I'll get to entertainment on July 4th. In the meantime, stay tuned for Twinkies!
Posted by Pinku-Sensei at 2:04 PM