I concluded Diversity one of the themes of the Outstanding Commercial nominees at the 2021 Emmy Awards by telling my readers to "Stay tuned for more Emmy coverage, most likely continuing with the documentary and nonfiction nominees." I'm following through today by examining the documentary and nonfiction special nominees at the 73rd Primetime Creative Arts Emmy Awards, which feature a strong mix of politics, entertainment, technology, nature, and health.

'The Social Dilemma' earned the most nominations of any documentary or nonfiction special at the Creative Arts Emmy Awards with seven. Watch The Social Dilemma | Official Trailer | Netflix to learn what it's about.

We tweet, we like, and we share— but what are the consequences of our growing dependence on social media? As digital platforms increasingly become a lifeline to stay connected, Silicon Valley insiders reveal how social media is reprogramming civilization by exposing what’s hiding on the other side of your screen.

The world has long recognized the positive applications of social media, from its role in empowering protesters to speak out against oppression during the Arab Spring uprisings almost a decade ago, to serving an instrumental role in fighting for equity and justice today. And in 2020, during an astonishing global pandemic, social media has become our lifeline to stay in touch with loved ones, as well as proving to be an asset for mobilizing civil rights protests. However, the system that connects us also invisibly controls us. The collective lack of understanding about how these platforms actually operate has led to hidden and often harmful consequences to society—consequences that are becoming more and more evident over time, and consequences that, the subjects in The Social Dilemma suggest, are an existential threat to humanity.

The Social Dilemma is a powerful exploration of the disproportionate impact that a relatively small number of engineers in Silicon Valley have over the way we think, act, and live our lives. The film deftly tackles an underlying cause of our viral conspiracy theories, teenage mental health issues, rampant misinformation and political polarization, and makes these issues visceral, understandable, and urgent. Through a unique combination of documentary investigation and entertaining narrative drama, award-winning filmmakers Jeff Orlowski (Chasing Ice, Chasing Coral) and Larissa Rhodes (Chasing Coral) have once again exposed the invisible in a manner that is both enlightening and harrowing as they disrupt the disrupters by unveiling the hidden machinations behind everyone’s favorite social media and search platforms.

The film features compelling interviews with high-profile tech whistleblowers and innovation leaders including Tristan Harris of the Center for Humane Technology; the co-inventor of the Facebook “Like” button, Justin Rosenstein; Tim Kendall, former President of Pinterest and former Director of Monetization at Facebook; Cathy O’Neil, author of Weapons of Math Destruction; Rashida Richardson, Director of Policy at the AI Now Institute, and many others. Demonstrating how social media affects consumers on a personal level, these fascinating insider insights are seamlessly woven into a captivating narrative, including Vincent Kartheiser (Mad Men), that illuminates the very real consequences these seemingly innocent technologies can have on our everyday lives.

I've examined documentaries about social media being a vehicle for social control and manipulation before on this blog, so this is not a new theme for me. Neither is my explanation for why it's called "The Social Dilemma."

On the one hand, it connects people and has become an efficient way to communicate. On the other, those connections can be used for ill just as easily, if not more so, than for good.

What is new is that I'm finally featuring "The Social Dilemma" in a post, as I hinted I might in 'MLK/FBI,' 'St. Louis Superman,' and 'Mr. SOUL!' all winners at the 2020 Critics' Choice Documentary Awards and stated outright in I recommended 'Spaceship Earth,' a documentary about Biosphere 2, to my students. It took being nominated at the Emmy Awards for me to do so. Better late than never.

The other political documentary nominated in this category is "Boys State" with two nominations compared to seven for "The Social Dilemma." On the basis of total nominations, "The Social Dilemma" would have the advantage, but I'm not sure about that. When the two were both nominated for Best Political Documentary at the Critics' Choice Documentary Awards, "Boys State" won. In addition, "Boys State" beat "The Social Dilemma" for Audience Choice Prize at the Cinema Eye Honors Awards. That's not guaranteed to happen here. As I keep repeating when I blog about awards shows, electorates matter. The Hollywood entertainment professionals of the Television Academy might disagree with the Critics Choice Association and vote for a different winner than the movie and TV critics. 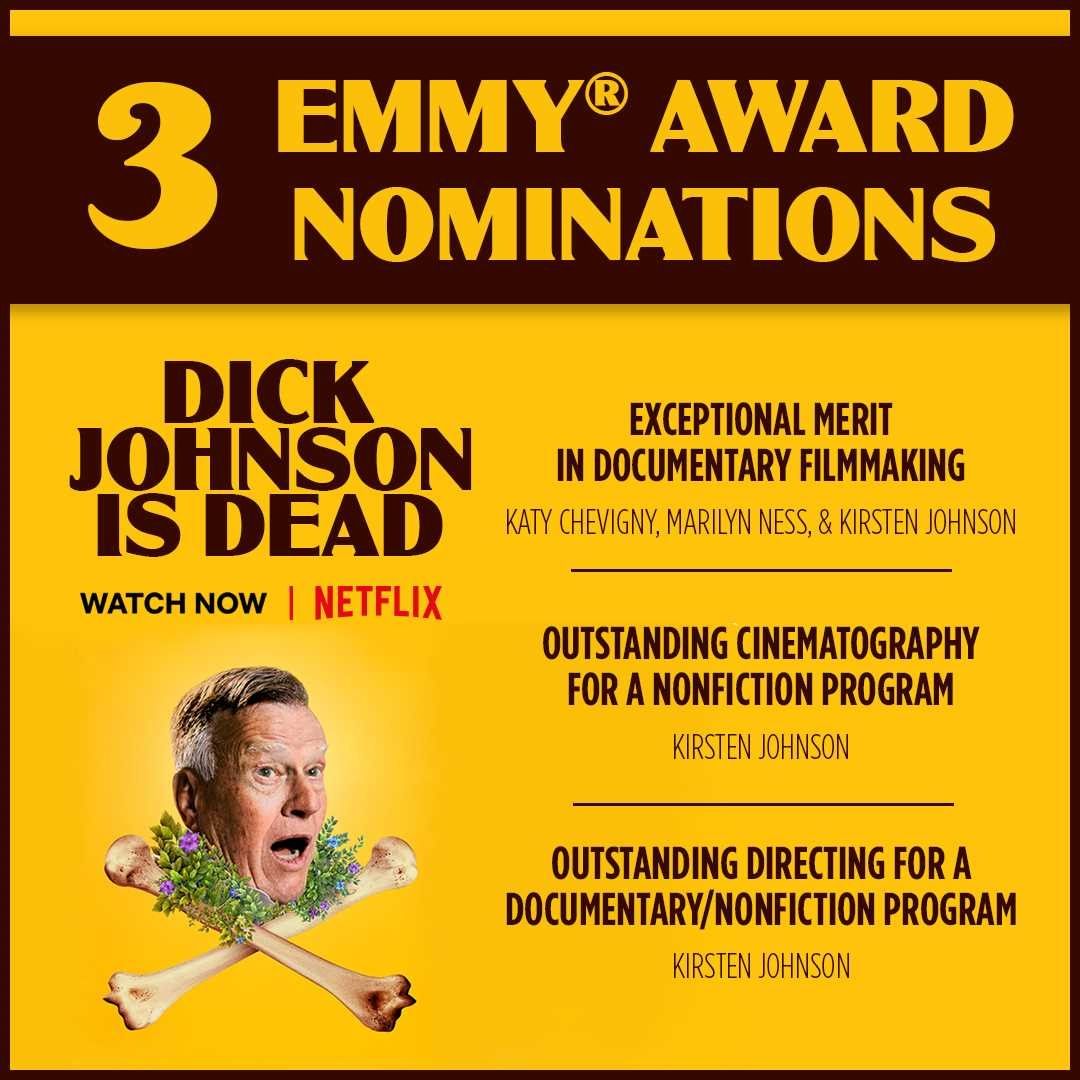 None of the nominees in this category have entertainment figures as their subjects, so the bias of Hollywood to vote for a good show about itself, or at least entertainment, won't play into it. While I shortlisted both "76 Days" about the beginning of the COVID-19 pandemic in Wuhan, China, and "Welcome to Chechnya" about the struggle for LGBTQ rights in the rebel Russian republic for the Best Political Documentary of 2020 at the Golden Coffee Cups based on their nominations in this category, I think neither is likely to win. Instead, I expect "Dick Johnson Is Dead" will bring home the Emmy based on its three nominations while the other two documentaries only have one each and on its winning Best Documentary and Best Director at the Critics' Choice Documentary Awards and Outstanding Achievement in Direction at the Cinema Eye Honors Awards.

Since I think it will win, I'm embedding Dick Johnson Is Dead | Official Trailer | Netflix in addition to trailers for the two political nominees. Watch.

A lifetime of making documentaries has convinced award-winning filmmaker Kirsten Johnson of the power of the real. But now she’s ready to use every escapist movie-making trick in the book - staging inventive and fantastical ways for her 86-year-old psychiatrist father to die while hoping that cinema might help her bend time, laugh at pain and keep her father alive forever. The darkly funny and wildly imaginative DICK JOHNSON IS DEAD is a love letter from a daughter to a father, creatively blending fact and fiction to create a celebratory exploration of how movies give us the tools to grapple with life’s profundity. DICK JOHNSON IS DEAD was filmed, produced and directed by Kirsten Johnson (Cameraperson), produced by Katy Chevigny and Marilyn Ness, co-produced by Maureen A. Ryan and executive produced by Megan Ellison.

The Sundance Film Festival award for Innovation in Nonfiction Storytelling, which the trailer advertised up front, helps this film's chances, too.

On January 23, 2020, China locked down Wuhan, a city of 11 million, to combat the emerging COVID-19 outbreak. Set deep inside the frontlines of the crisis in four hospitals, 76 Days tells indelible human stories of healthcare workers and patients who struggle to survive the pandemic with resiliency and dignity.

After watching that, I can tell anyone who thinks MTV is incapable of producing serious content that they don't know what they are talking about.

From Academy Award-nominated director David France (How to Survive a Plague, The Death and Life of Marsha P. Johnson) comes Welcome to Chechnya, a powerful and eye-opening documentary about a group of activists risking their lives to confront the ongoing anti-LGBTQ persecution in the repressive and closed Russian republic of Chechnya.

With unfettered access and a commitment to protecting anonymity, this documentary exposes Chehnya’s underreported atrocities while highlighting a group of people who are confronting brutality head-on. The film follows these LGBTQ activists as they work undercover to rescue victims and provide them with safe houses and visa assistance to escape persecution. Welcome to Chechnya is a Public Square Films production, directed by David France and produced by Alice Henty, Joy A. Tomchin, Askold Kurov and David France.

All I have to say after watching that is "yikes!"

Follow over the jump for the rest of the nominations for documentaries and nonfiction specials. 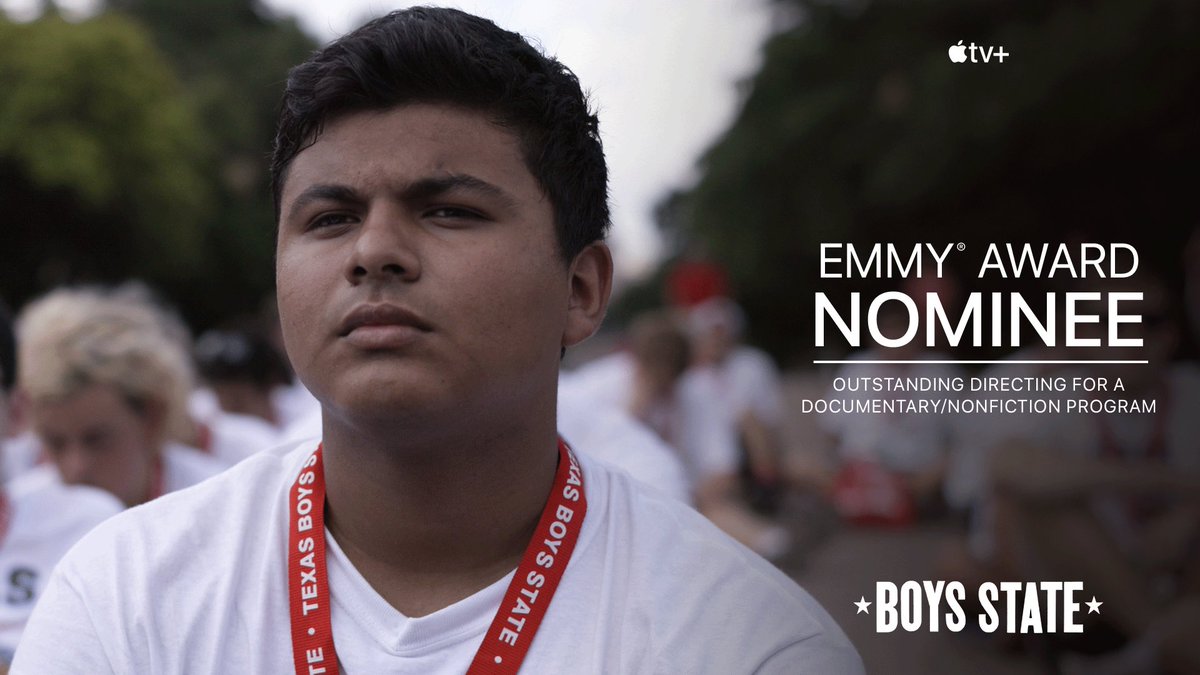 I think Kirsten Johnson has the inside track in this category based on her winning awards for directing at the Critics' Choice Documentary Awards and Cinema Eye Awards. In addition, the trailer shows her being a director in the film, so it makes her craft more obvious. That's too bad for Jeff Orlowski, director of "The Social Dilemma" who won Best Nature Documentary Emmy Awards twice, once for for Chasing Ice and again for Chasing Coral. He has shown that he knows how to portray scientific and technological issues, which I appreciate. I just don't think it will be enough this year. My choice to upset the field is "Allen vs. Farrow," which I will cover in the next installment about documentary and nonfiction series. That's a well-made story about Hollywood, even if it's unflattering. All things being equal, the members of the Television Academy would vote for it. I'm just not sure that all things about the nominees are equal. 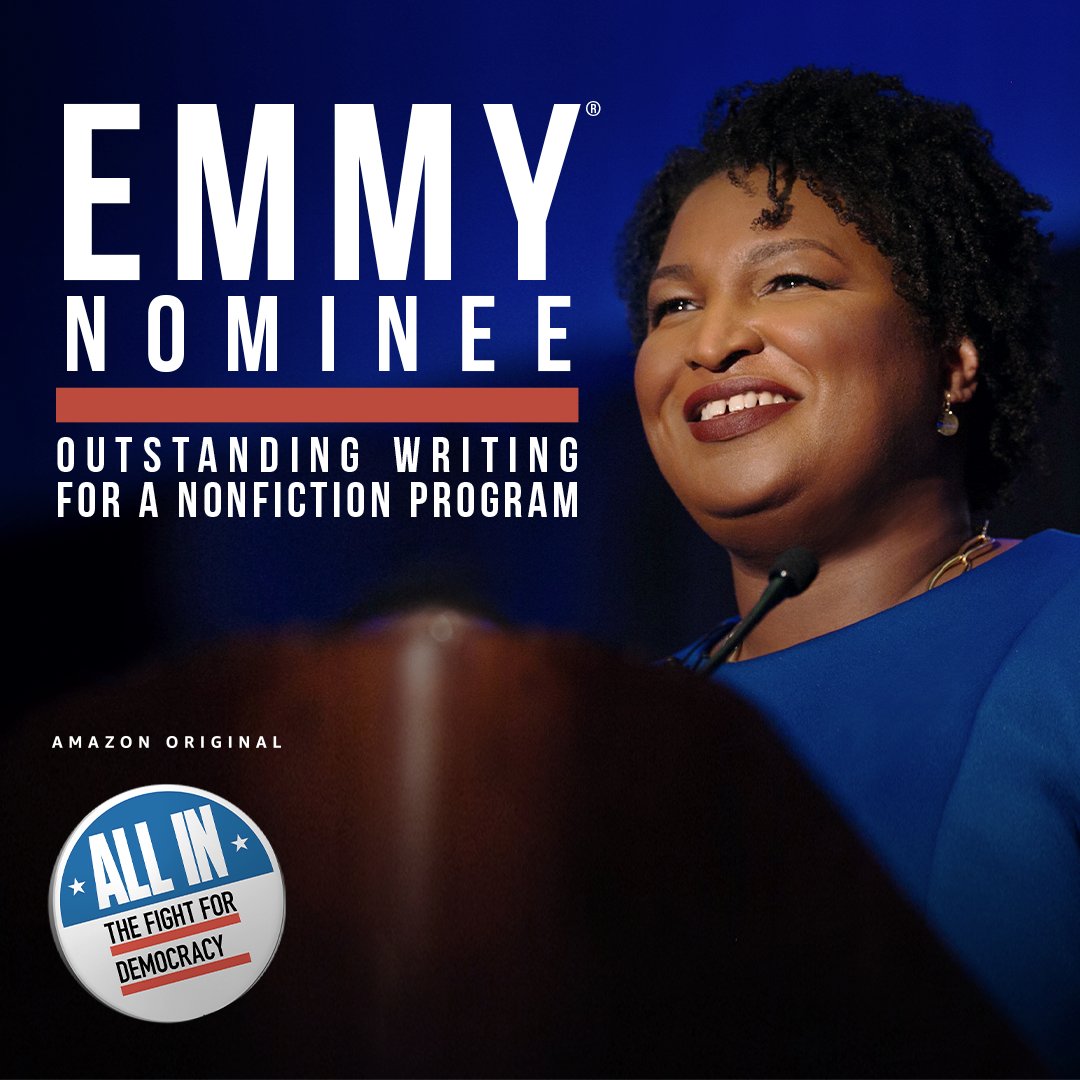 Outstanding Writing for a Nonfiction Program

Allen v. Farrow (Episode: "Episode 3") (HBO)
All In: The Fight for Democracy (Prime Video)
The Bee Gees: How Can You Mend a Broken Heart (HBO)
The Social Dilemma (Netflix)
Tulsa Burning: The 1921 Race Massacre (History) 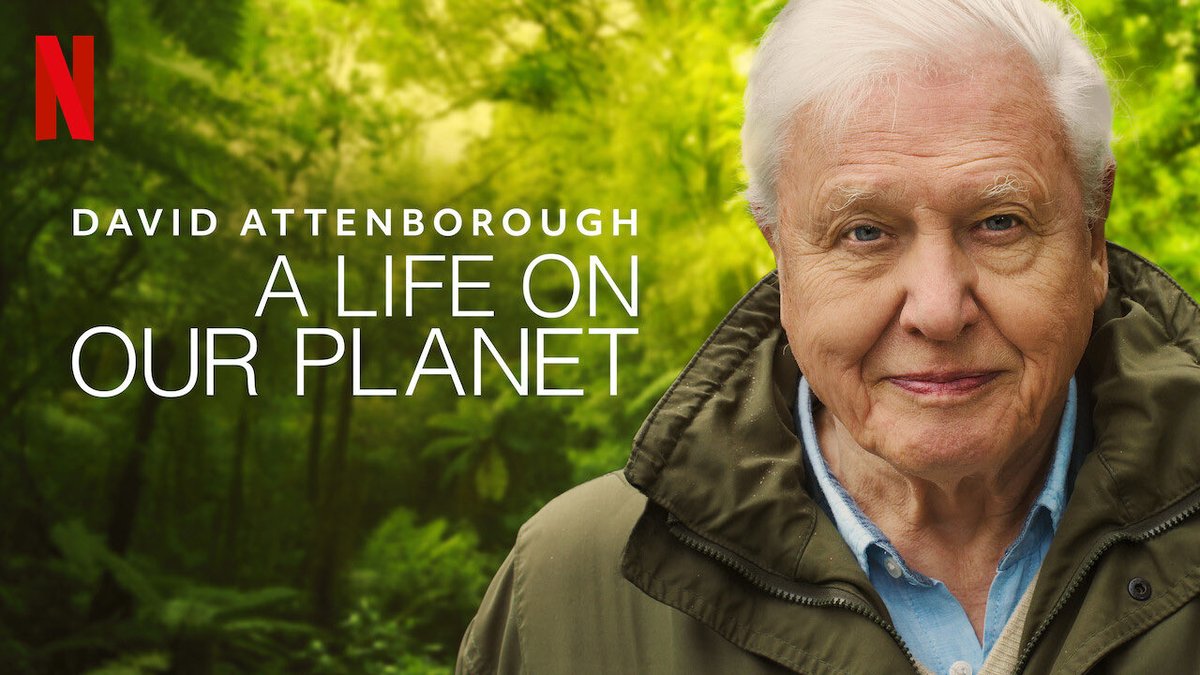 As I observed four years ago, anture documentaries tend to be well-photographed. That's the case here, where nature documentary "David Attenborough: A Life on Our Planet," natural disaster documentary "Rebuilding Paradise," nature nonfiction series "Secrets of the Whales," and life during the pandemic nonfiction series "City So Real" join "Dick Johnson Is Dead" and "The Social Dilemma" among the nominees. I expected "David Attenborough: A Life on Our Planet" would be eligible for Emmy Awards and it earned five nominations, just not the one for Outstanding Narrator I thought it would. I'm not sad, as Sir David earned two nominations in that category for other shows, which is a story for another entry. Speaking of other entries, I'll have to add "Rebuilding Paradise" to the Golden Coffee Cups shortlist; it's eligible but I missed that until just now. 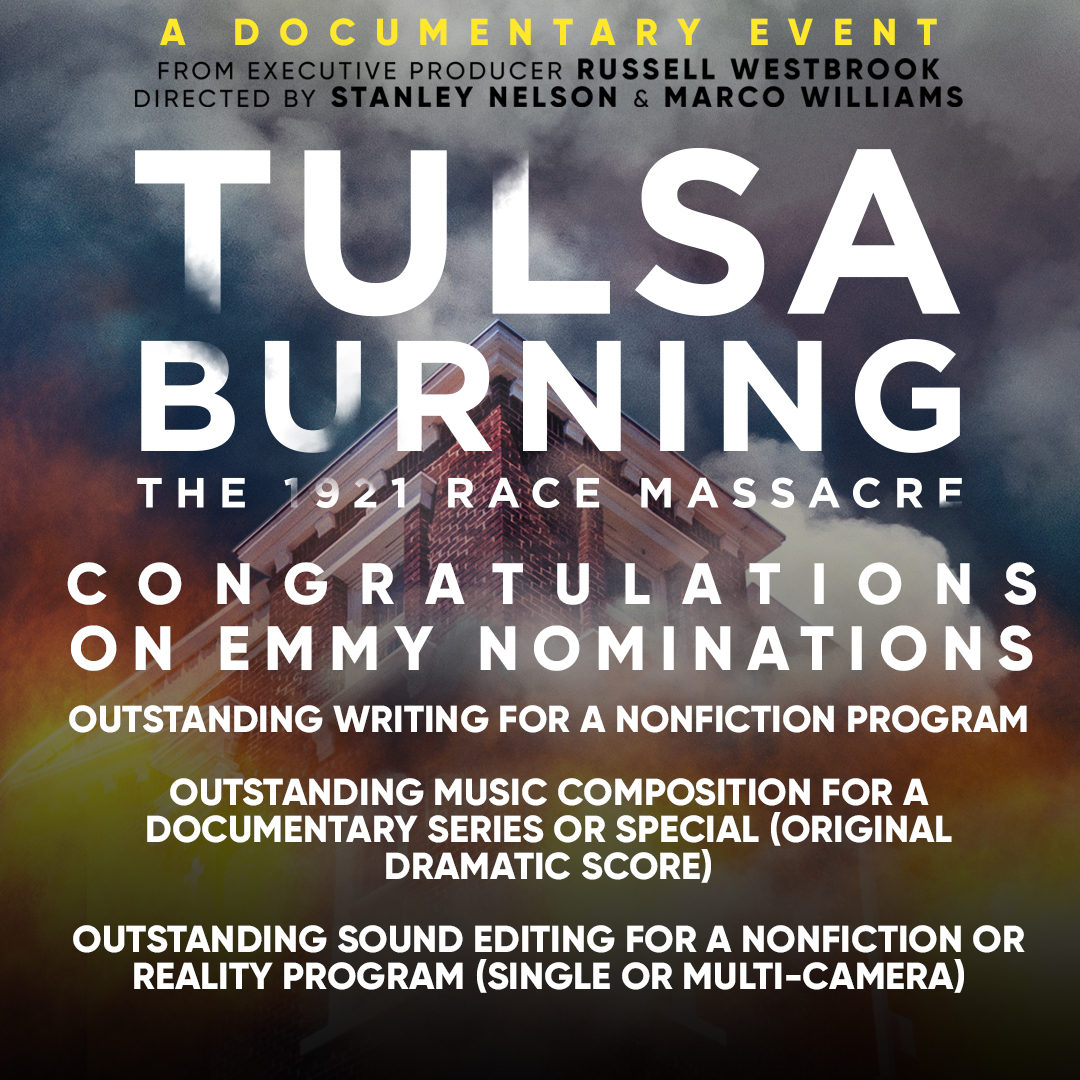 I don't know who will win this category, but if I thought name recognition meant something, I'd pick Branford Marsalis as the favorite for "Tulsa Burning: The 1921 Race Massacre." My other choice would be Steven Price for "David Attenborough: A Life on Our Planet," who earned a nomination in this category two years ago for "Our Planet." 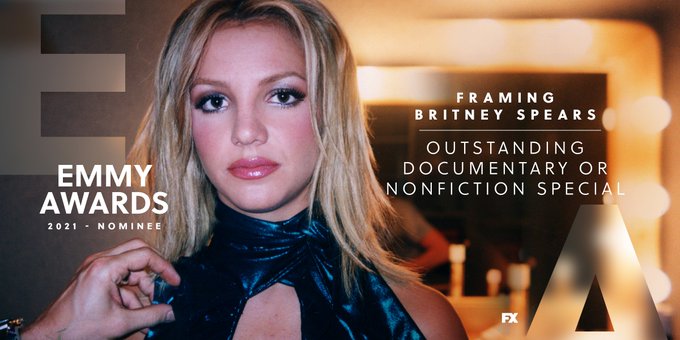 Lindsay Utz is a returning nominee in this category, having been nominated for "American Factory" last year. That might be enough for "Billie Eilish: The World's a Little Blurry" to upset "David Attenborough: A Life on Our Planet" or "The Social Dilemma" among the documentaries in this category. Then why did I feature "Framing Britney Spears (The New York Times Presents)?" I couldn't find a better place for it and it was my last chance to do so. 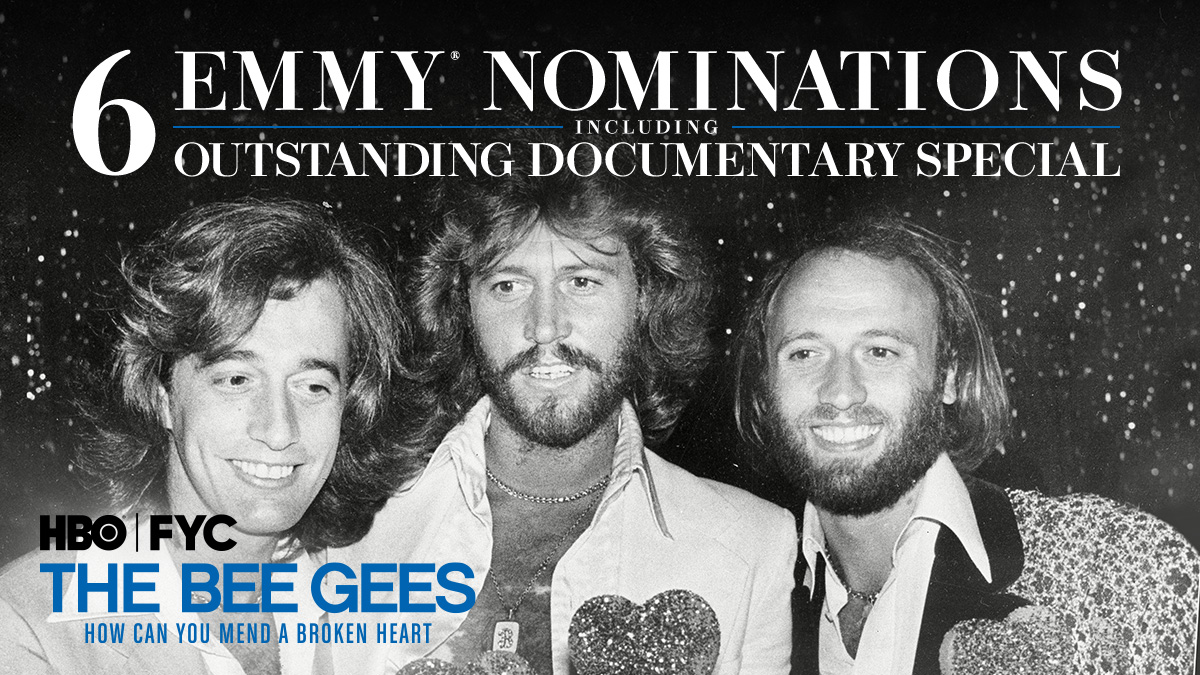 While nature documentaries have good sound, I think music documentaries have the inside track, so I think it's between "Billie Eilish: The World's a Little Blurry" and "The Bee Gees: How Can You Mend a Broken Heart" for this category and the next. 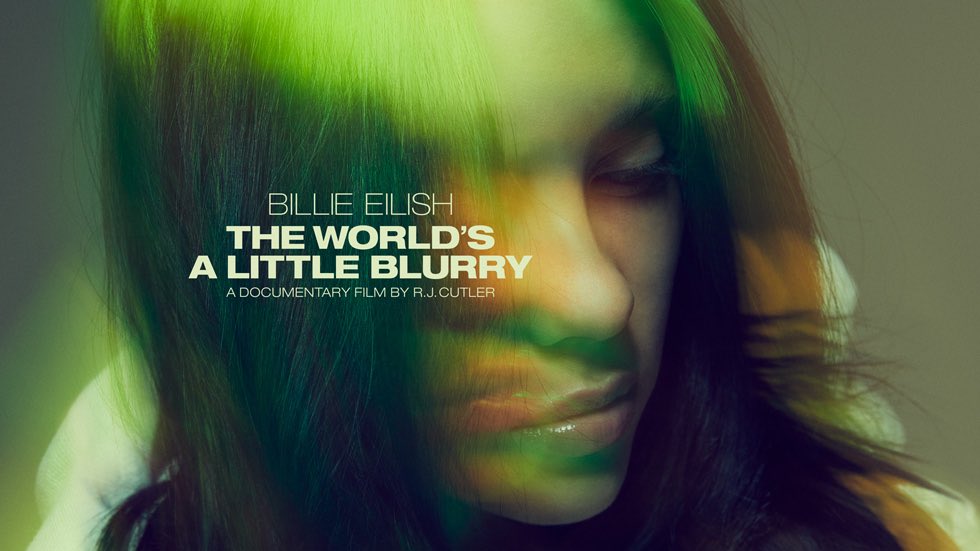 The Bee Gees: How Can You Mend a Broken Heart (HBO)
Billie Eilish: The World's a Little Blurry (Apple TV+)
David Attenborough: A Life on Our Planet (Netflix)
Life Below Zero (Episode: "The Other Side") (Nat Geo)
Stanley Tucci: Searching for Italy (CNN)
Tina (HBO)

Previous posts in this series
Posted by Pinku-Sensei at 3:57 PM