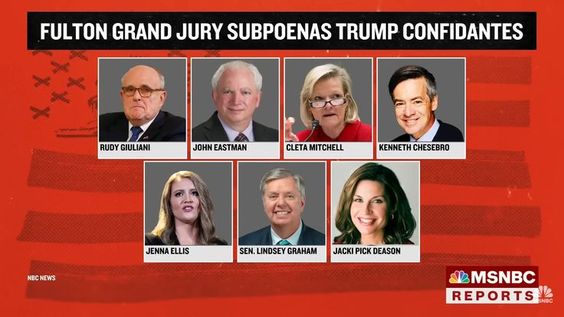 While I have been focused on the January 6th Committee hearings, another level and branch of government has been working on the attempt to overturn the 2020 election, namely Fulton County, Georgia, examining "another perfect call," Trump and his associates' attempts to change the reported vote tally in Georgia. MSNBC broke the story in Giuliani, Sen. Graham, John Eastman Subpoenaed By Fulton County Grand Jury.

The video cut off before anchor Hallie Jackson could get to the other two guests for analysis. Luckily, CNN provided some of that in Rudy Giuliani, Lindsey Graham and John Eastman subpoenaed by Fulton County DA in election probe.

As I wrote at the time, "I've seen this movie before, as it looks like a sequel to the phone call that got Trump impeached." It didn't get The Former Guy impeached a second time, but it could get him in legal trouble. As I wrote about the Trump campaign's lawyers being sanctioned, "'The wheels of justice are grinding slowly in this case, but I expect they will indeed grind exceedingly fine.' May they also grind exceedingly fine for Trump and his seditious supporters, if not as slowly."
Posted by Pinku-Sensei at 11:28 AM