Happy Throwback Thursday! I'm beginning my retrospectives with an update to Stephen Colbert remembering the insurrection on January 6th along with other efforts to overturn the 2020 election.* I begin with Stephen's monologue from Tuesday night, Why Is T**** Hiding His Jan 6th Phone Records? | Cawthorne's Cocaine Claims Rattle GOP.

The person in charge of the show's YouTube channel neglected to mention that the first half of the monologue focused on Putin's war on Ukraine. The material about The Former Guy's missing phone records begins about halfway through. The lack of records certainly looks suspicious.

Stephen opened Tuesday's show with his and the show's writers speculating on This Is Who T**** Called During The Capitol Insurrection.


Ordering a pizza for someone who isn't expecting one is a well-know hacker prank. Imagining that the prankster is also trying to poison the target is something much more sinister. That The Former Guy has such a bad reputation that anyone would think it's funny is scary!

The night before, Stephen's first segment at the host desk was Ginni Thomas's Texts To Meadows Are Full Of B-Movie Quotes And Conspiracy Theories.

That all sounds even loopier than I expected, although I shouldn't be surprised after listening to double Razzie winner Mike Lindell. I just had hope that the wife of a Supreme Court Justice would be less susceptible to conspiracy theories. Nope, she's not.

I'm sure this won't be the last I'll write about the investigation into last year's attempted self-coup. In the meantime, follow over the jump for the top posts about it and the other attempts to overturn the 2020 presidential election from the eleventh year of Crazy Eddie's Motie News. 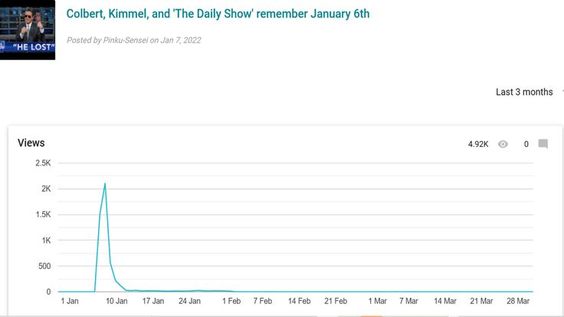 Colbert, Kimmel, and 'The Daily Show' remember January 6th from January 7, 2022 earned ~4,800 default and 4,924 raw page views by March 20, 2022. It earned those page view after I shared the link at the Coffee Party USA Facebook page. That was enough to make it the fourth most read entry during the eleventh year of Crazy Eddie's Motie News and the most read entry during January 2022, as well at the most popular post about the attempt to overturn the 2020 election during the blogging year just ended. 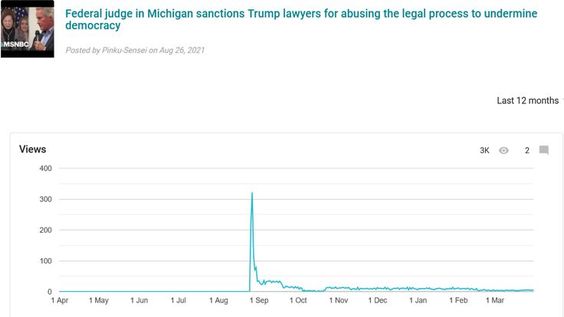 Federal judge in Michigan sanctions Trump lawyers for abusing the legal process to undermine democracy, posted August 26, 2021, earned 2,945 raw page views by March 20, 2022, enough for eighth place according to that measure, but failed to appear in the default top twenty for the blogging year. I shared the link at the Coffee Party USA Facebook page and Infidel753 shared it at his blog, but that only accounted for half of the post's page views over the past year. It was the top post of August 2021 and the fourth most read entry of September 2021. It ended the 2021 calendar year in eighth place according to raw page views with 2,391. It has continued to gain page views since then, reaching 2,996 page views by March 31, 2022, which the image above rounds to 3K (3,000). 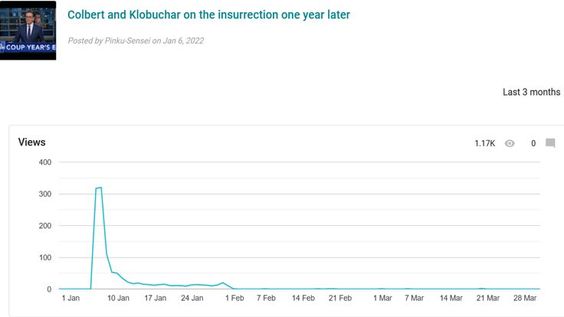 Returning to "The Late Show," Colbert and Klobuchar on the insurrection one year later from January 6, 2022 earned ~1,030 default and 1,167 raw page views by March 20, 2022, enough for it to rank nineteenth according default page views and 28th among all posts during the eleventh blogging year and 25th among entries posted between March 21, 2021 and March 20, 2022. It earned most of those page views by being shared at the Coffee Party Facebook page. It was also the third most read entry during January 2022. 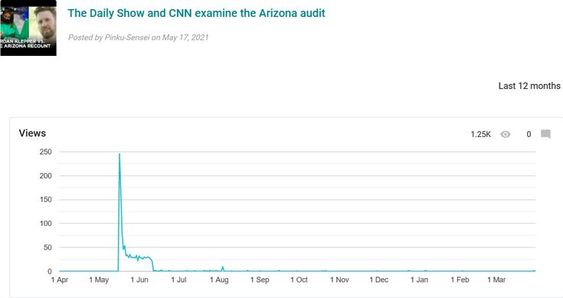 Colbert doesn't get all the laughs. The Daily Show and CNN examine the Arizona audit posted May 17, 2021 also explored the attempt to overturn the 2020 election results. It was the most read entry of May 2021 and ended the 2021-2022 blogging year with 1,250 raw page views, enough to rank 26th overall last year and 23rd among all entries posted during the blogging year just ended. Like all the other entries I list today, it earned most of its page views from being shared at the Coffee Party Facebook page. 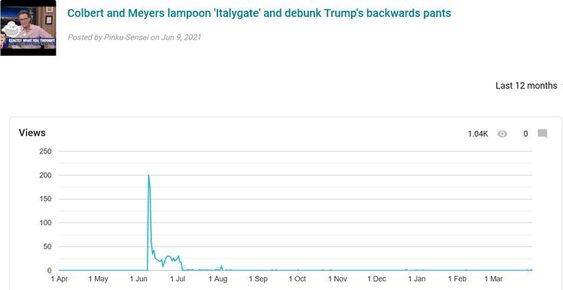 The last post for today's topic is Colbert and Meyers lampoon 'Italygate' and debunk Trump's backwards pants from June 9, 2021. It earned 1,036 raw page views mostly by being shared at the Coffee Party Facebook page. Those were enough for it to be the second most read entry during June 2021 and the 32nd most read entry overall and the 29th most read according to raw page views among entries posted during the eleventh year of this blog.

*This is not the top post of the blogging year just ended. I plan on getting to that on Sunday. Stay tuned for it and another retrospective tomorrow for Flashback Friday on April Fools Day. Holidays, anyone?

Previous posts in this series Previous retrospectives about the 2020 election and impeachment
Posted by Pinku-Sensei at 4:57 PM