Vox explains the phone call that could get Trump impeached 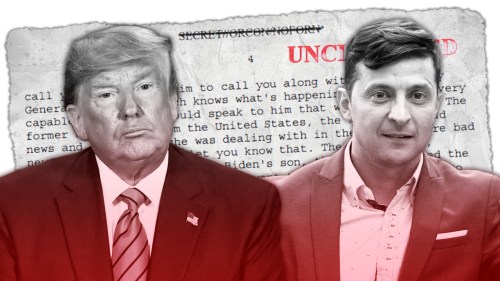 Last week, Ezra Klein of Vox argued for impeachment even if it doesn't result in conviction and removal.  This week, Vox explains the basis of a possible impeachment, The phone call that could get Trump impeached.

The impeachment inquiry into President Trump started with a phone call. And what makes it noteworthy is actually how simple it is.

Trump’s White House released a rough transcript of his call with Ukraine’s president, Volodymyr Zelensky. It shows Trump asking a foreign country to investigate a man who could challenge him in the 2020 election: Joe Biden. But to understand exactly what Trump wanted Zelensky to do, we have to get into a theory Trump has peddled about Biden.

According to this explanation, Trump got the story backwards.  I shouldn't be surprised.  Trump has a weakness for conspiracy theories.  I also am not surprised that floating one about Joe Biden is backfiring.  It seems to be part of a pattern, as I noted in a comment on A Dumpster Fire on a Garbage Barge at Kunstler's blog.


"They turned on him...because he made the fatal mistake of trying to take down a fellow member of the ruling elite."  That seems to be true of the Democrats as well.  Swalwell attacked Trump [I meant Biden] at the first debate.  Next thing I know, Swalwell drops out because he didn't make the next debate.  Harris also attacked Biden. After the sugar rush of that wore off and she failed to follow up at the next debate, her fortunes fell.  Besides, she pissed off people like my mom and my wife; they didn't like her attacking Biden.  Castro attacked Biden at the third debate, now he's warning his supporters he may not make the November debate.  Trump went after Biden and Democratic Representatives in Republican-leaning seats who had been avoiding impeachment pile on.  Directly going after Biden personally does not seem to be working for candidates.  Instead, it seems to work against them.

Just the same, that hasn't stopped Trump and his supporters from trying.  FiveThirtyEight shows that Fox News is trying to make the Bidens the center of the scandal, not Trump.  The good news for Biden is that it keeps him the most mentioned Democratic candidate in the news.  The bad news is that it might taint Biden in the eyes of Democratic voters, but I'm not sure about that.  As Perry Bacon Jr. of FiveThirtyEight said, Biden is essentially arguing “I’m so electable that Trump is already trying to cheat to beat me.”  I tend to agree with that.  Once again, attacking Biden directly is backfiring.  Let's just hope impeachment itself doesn't backfire on the Democrats in Congress.
Posted by Pinku-Sensei at 9:20 AM