A dead cat bouncing on a rubber floor

Before the market opened yesterday.


We'll find out if NDD and I are right tomorrow at the close of the U.S. trading day.

What NND predicted was that the intraday low on Tuesday would be the low for the week, so the bottom of the current correction had already been created. I agreed with him. The proof of the pudding would be weather the markets continued to rise on Thursday and Friday. They did.

That was yesterday. Reuters has today's news.

Two days up in a row works for vindicating NDD. Even so, the Dow was down 1.5% for the week.

Also, Tuesday up and Wednesday down does look like a dead cat bounce.

Next, the S&P 500 since 2000. Pay attention to the far right of the graph. The left shoulder formed in early 2010 when the index couldn't break through the 1200 level, then declined below 1100. The head formed early this year when the S&P 500 rose above 1300, then declined gradually at first, then precipitously. 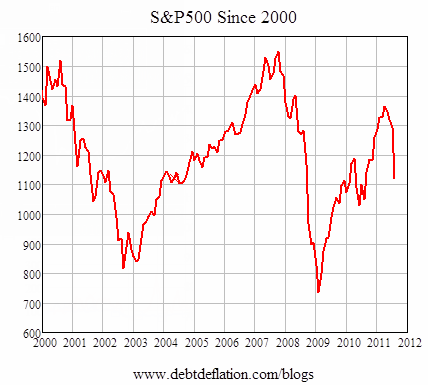 If this is the start of the formation of a long-term head-and-shoulders pattern, then the S&P should rise to about 1200 this year before declining to 1100. After that, I make no guesses. After all, I'm just an amateur.
Posted by Pinku-Sensei at 4:50 PM