Earlier today, I abstracted the last three Satan Sandwich entries and posted the result as It's been a wild couple of days on the_recession on LiveJournal. It looks like I spoke too soon when I wrote that headline.


The United States lost its top-notch AAA credit rating from Standard & Poor's on Friday in an unprecedented reversal of fortune for the world's largest economy.

S&P cut the long-term U.S. credit rating by one notch to AA-plus on concerns about the government's budget deficits and rising debt burden. The move is likely to raise borrowing costs eventually for the American government, companies and consumers.

"The downgrade reflects our opinion that the fiscal consolidation plan that Congress and the Administration recently agreed to falls short of what, in our view, would be necessary to stabilize the government's medium-term debt dynamics," S&P said in a statement.

The decision follows a fierce political battle in Congress over cutting spending and raising taxes to reduce the government's debt burden and allow its statutory borrowing limit to be raised.

The odd thing about this downgrade is that the markets weren't calling for it.

As the focus for investors shifted from the debate in Washington to the outlook for the global economy, even with the prospect of a downgrade, 30-year long bonds had their best week since December 2008 during the depth of the financial crisis.

Yields on 10-year notes, a benchmark for borrowing rates throughout the economy fell as far as 2.34 percent on Friday -- their lowest since October 2010 -- also very low by historical standards.

"To some extent, I would expect when Tokyo opens on Sunday, that we will see an initial knee-jerk sell-off (in Treasuries) followed by a rally," said Ian Lyngen, senior government bond strategist at CRT Capital Group in Stamford, Connecticut.
...
"The long-term implications are daunting. Short-term, Treasuries remain a premier safe-haven refuge," said Jack Ablin, chief investment officer at Harris Private Bank in Chicago.

If investors thought that U.S. Treasury bonds were less credit-worthy, they wouldn't be bidding them up as part of a flight to safety, lowering the interest they give; they'd be bidding them down, raising the interest rate as a sign of increased risk. The investors still think U.S. Treasury bonds are safe, so there is no market justification for this action. Instead, as the press release itself makes clear, the justification is political. (Hat/tip to Think Progress for finding these passages.)


The political brinksmanship of recent months highlights what we see as America’s governance and policymaking becoming less stable, less effective, and less predictable than what we previously believed. The statutory debt ceiling and the threat of default have become political bargaining chips in the debate over fiscal policy.
...
It appears that for now, new revenues have dropped down on the menu of policy options.
...
The act contains no measures to raise taxes or otherwise enhance revenues, though the committee could recommend them.
...
Compared with previous projections, our revised base case scenario now assumes that the 2001 and 2003 tax cuts, due to expire by the end of 2012, remain in place. We have changed our assumption on this because the majority of Republicans in Congress continue to resist any measure that would raise revenues, a position we believe Congress reinforced by passing the act.

Note the bolded part. S&P is blaming the GOP in Congress, not the Administration.

What would change S&P's mind?


Our revised upside scenario–which, other things being equal, we view as consistent with the outlook on the ‘AA+’ long-term rating being revised to stable–retains these same macroeconomic assumptions. In addition, it incorporates $950 billion of new revenues on the assumption that the 2001 and 2003 tax cuts for high earners lapse from 2013 onwards, as the Administration is advocating.

S&P is taking the Obama Administration's side on this issue.

So, why are the Republicans in Congress so reluctant to raise taxes? I blame Grover Norquist. From The Hill.


Americans for Tax Reform President Grover Norquist...said he has already been assured by “the right people” that House Speaker John Boehner (R-Ohio) and Senate Minority Leader Mitch McConnell (R-Ky.) will not choose anyone willing to give ground on raising taxes, and he is confident enough to leave town on Wednesday for August vacation.

He said he would be “fine” with leadership using the opportunity to give a conservative freshman the chance to shine, mentioning Rep. Kristi Noem (R-S.D.).

Similarly, with respect to the Senate, Norquist can see McConnell appointing a young gun like Sen. Marco Rubio (R-Fla.) to the panel to give him a bigger platform. He said he would like to see Sens. Orrin Hatch (R-Utah) and Jeff Sessions (R-Ala.) appointed.

Norquist does not want to see former Gang of Six Sens. Tom Coburn (R-Okla.) or Saxby Chambliss (R-Ga.) on board because they made “troubling” statements in support of revenue increases during the deficit negotiations this spring. He said that if Gang of Six Sen. Mike Crapo (R-Idaho) made stronger commitments to oppose taxes, he could be OK with that appointment.

Hat/tip to Nonnie9999 at Hysterical Raisins for finding this article, which she illustrated with the following photomanip. 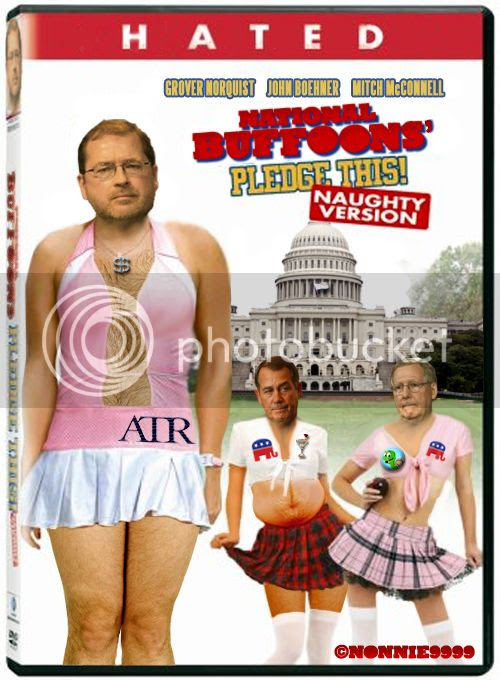 On one final note, Paul Krugman is livid about the downgrade, mostly because he thinks that S&P have no credibility.

On the other hand, it’s hard to think of anyone less qualified to pass judgment on America than the rating agencies. The people who rated subprime-backed securities are now declaring that they are the judges of fiscal policy? Really?

Just to make it perfect, it turns out that S&P got the math wrong by $2 trillion, and after much discussion conceded the point — then went ahead with the downgrade.
...
In short, S&P is just making stuff up — and after the mortgage debacle, they really don’t have that right.

So this is an outrage — not because America is A-OK, but because these people are in no position to pass judgment.

Here's the comment I left in response, which is still awaiting moderation.


Well, Dr.Krugman, the "invisible bond vigilantes" have just shown themselves. It turned out that they weren't the investors; they were the rating agencies. S&P followed the lead of Dagong Global Credit Rating Co., who yesterday downgraded its rating of U.S. credit from A+ to A. At least Dagong doesn't have the stain on its record of inflating the ratings of CDOs during the real estate bubble, although one could make a claim that they are doing the bidding of the Beijing regime.

Speaking of S&P giving out AAA ratings to now worthless CDOs, isn't it about time to start a new campaign to investigate S&P for their irresponsible behavior? Turn about is fair play.

Downgrade us, we'll downgrade you.
Posted by Pinku-Sensei at 11:37 PM