Stuart Staniford on the value of education

I surfed over to Early Warning because one of his posts was featured in a Mother Jones article about energy constraints on the U.S. economy, but that's not what I inspired me to post this entry. Instead, Stuart posted Returns to Education, which included this graph of the average lifetime earnings of Americans based on their level of educational achievement. 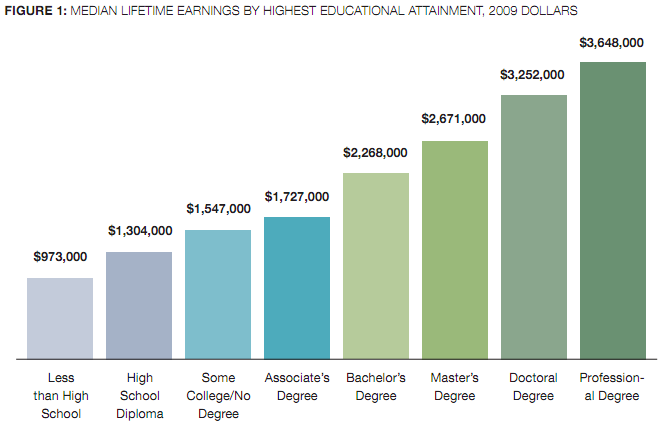 I'm going to add it to my lecture on economics as an example of how society converts social capital, namely the skills, knowledge, and social connections from education, into economic capital, the students' earning power. The graph will join the latest version of this one from Calculated Risk, which displays the historical relationship between educational level and unemployment in the U.S.

Both graphs show the value of education in economic terms, whether in earning power or protection from unemployment. The one from Calculated Risk definitely grabs the students' attention.  I hope Stuart's does as well.

Stuart has many more very interesting graphs showing how the lifetime earnings estimates in the first graph were derived. If you like numbers and graphs and believe in the power of education, I highly recommend reading Returns to Education.
Posted by Pinku-Sensei at 8:04 PM