Here's a story about the intersection of crime and pop music I originally posted it to unfunny_fandom on JournalFen that definitely fits this blog's point of view, "a science fiction slant and a Detroit perspective." The premise is definitely science-fictional and Insane Clown Posse hail from Detroit.

I present to you some unfunny about a fandom that does unfunny things in a funny way--Juggalos. It seems that the fans of Insane Clown Posse have become decidedly unfunny to law enforcement and the FBI has made some Foolish Ballistic Insinuations as a consequence.

Last fall, the FBI included Juggalos in their National Gang Assessment for 2011 (PDF). On pages 22 and 23, the FBI lists them under "non-traditional gangs," calling them a "loosely-organized hybrid gang." Some of the criminal activities carried out by ICP fans appear in this section, along with a photo of a Juggalo with a gun that the FBI took from the ATF (trigger warning for descriptions of violence). 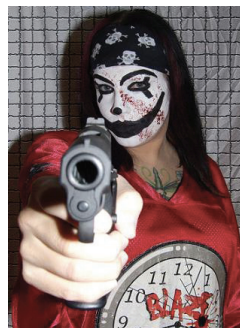 At first, the inclusion of Juggalos in the FBI's list was mocked by Spencer Ackerman at Wired, who observed "[t]he FBI has recently had difficulty distinguishing ordinary American Muslims from terrorists; now it appears it has a similar problem distinguishing teenage fads from criminal conspiracies." As recently as Thursday, the Village Voice posted that people thought the FBI report was an example of "another example of a federal agency looking foolish for its cultural ineptitude." That was until the U.S. Marshal Service issued a press release listing the fugitives added to New Mexico's Most Wanted.


Mark Anthony Carslon A.K.A. Mark Carlton is wanted on two felony warrants for failing to comply with the terms of probation both on underlying armed robbery cases. Carlson is a member of the Insane Clown Posse “Juggalo” gang. The “Juggalos” were recently classified as a gang by the Albuquerque Police Department Gang unit and it is believed that Carlson is still actively committing armed robberies in the Albuquerque Metro area.

Bolding from The Village Voice, who also reproduced Carlson's wanted poster, which listed his criminal affiliation as "Insane Clown Posse 'Juggalo'." Poster over the jump.

This declaration has caused the band and its fans all kinds of grief, as outlined in Vice (NSFW--what do you expect from a magazine called "Vice"?). If nothing else, Juggalos can be sentenced as gang members instead of ordinary criminals and the band's merchandise is no longer being sold at Hot Topic and other stores, who won't touch "gang apparel."

On Friday, ICP announced that they had had enough. The Village Voice reported:


Insane Clown Posse announced at the annual Gathering of the Juggalos "seminar," a veritable State of the Juggalo Union address given to "the heartbeat of the entire Juggalo world," that they were planning to sue the FBI in response.

The article also contains the text of the band's press release.

ICP and their label Psychopathic Records also launched a website, Juggalos Fight Back soliciting their fans for information about any legal troubles they may have suffered as a result of their fandom. Qualifying applicants will receive legal assistance provided by Psychopathic Records' lawyer.

Stay tuned for the fallout to this unfunny.

Hat/tip to commenter Nebris for passing on this story. Originally posted to unfunny_fandom on JournalFen. Crossposted to ontd_political on LiveJournal and Michigan Liberal.
Posted by Pinku-Sensei at 11:31 PM