As I wrote yesterday, after skipping last week, it's time to post another installment of a continuing series. Today, it's science crime scenes.

I'm going to skip the usual archeology stories about atrocities from the past and modern day smuggling, looting, and vandalism. That's not because I don't have any; I have quite a lot of them from Overnight News Digest: Science Saturday (Curiosity's first destination edition) on Daily Kos that I'll post in another edition. Instead, I'm going to focus on stories about crimes against science, the planet, and society from other disciplines, including psychology, sociology, and technology, along with a dose of policy, all but one of which come from the public research universities of Arizona, where there will be a primary election this coming Tuesday, according to Politics1.com. It turns out that all of these stories either directly or indirectly comment on the GOP's science policies or the party's top candidates.

I begin with a story from Science Magazine that is about a potential crime against science itself, a law from the state of Todd Akin and one that bears the stamp of the religious wing of the Republican Party.


Last week, Missouri voters gave themselves the right to pray without state interference. But some science educators are worried that the seemingly innocuous referendum on the 7 August ballot, which passed overwhelmingly, could also undermine the teaching of evolution in public schools.

Amendment 2 "is a lawyer's dream" because of its vagueness, says Joshua Rosenau, programs and policy director of the National Center for Science Education in Oakland, California, which tracks efforts by groups that oppose evolution. While the amendment begins by declaring that all residents "have a natural and indefeasible right to worship Almighty God according to the dictates of their own consciences," it also lists several situations in which that right must be protected. Rosenau is worried about one particular clause: "that no student shall be compelled to perform or participate in academic assignments or educational presentations that violate his or her religious beliefs."

Those words give students the legal right to skip assignments related to evolution if the subject matter conflicts with their beliefs, Rosenau says. And that exemption could extend throughout their scholastic career, he adds, since evolution is not just taught in one lesson but remains a recurrent theme throughout science education. The amendment also leaves a hole in their coursework, he says, as it provides no guidance on any substitute lessons.

Hat/tip to CharlesInCharge on Daily Kos, who included the above excerpt in You've Got to Show Me: The (New) Epistemological Crisis and commented about the law's greater significance.


We face a new epistemological crisis in this country. The crisis has been brewing for well over 50 years but, I would argue, since the advent of the internet has reached epidemic proportions. In an age where every URL is created equal and where precedence goes not to knowledge which is tested in the cauldron of the scientific method but rather by which spurious link comes up first in a Google search, how are we to evaluate statements and data to see whether they accurately represent truth or reality?

Thomas Kuhn, in The Structure of Scientific Revolutions, argued that the history of science could be explained by anomalies in a prevailing paradigm reaching the point where a 'crisis' occurs, such that the existing paradigm must be overthrown and replaced by a new paradigm. Think Einstein replacing Newton or Darwin replacing the Biblical account of Creation. The point is that internal contradictions within an older established order reach such a fever pitch that the older order no longer suffices. That crisis now besets the very mechanisms by which our culture arbitrates what it calls knowledge. The epistemological crisis is now upon us and it is hard to forsee the new paradigm that will replace the ancien regime.

Scientific revolutions are almost always advancements in our understanding of the universe. I have my doubts that what is happening qualifies as one.

Follow over the jump for the rest of the past week's stories, all of which bear on a weakness of the Republican presidential ticket.


The first story may be the largest effort at prevention of a crime against the environment on the entire list, the destruction of the tropical rain forest. Not only would this help stem the loss of biodiversity, but it would preserve one of the "lungs of the planet," which are needed to absorb carbon dioxide and slow climate change.


Tropical rainforests are the biggest defense against global warming, absorbing 50 percent more carbon than other kinds of forests. Yet they are disappearing at a rate of about 11 million hectares a year.

Yeon-Su Kim, a Northern Arizona University ecological economic professor, is researching how economic incentives may slow the destruction of these important carbon-storing ecosystems and decrease the amount of greenhouse gases released into the atmosphere.

“We have a way of helping rainforest communities while slowing the process of global warming,” she said.

Of course, the GOP is a bunch of climate change deniers, as detailed in What a Difference a more Northern Latitude makes ... by jamess on Daily Kos. While Romney has been coy about his views on climate change, Paul Ryan has not, as the Washington Post reports.


Ryan’s track record on environmental issues is certainly less green-tinged than Romney’s. For one, Ryan has consistently voted against government efforts to tackle climate change. Like many House Republicans, he has voted to block efforts by the EPA to regulate carbon-dioxide emissions. He approved an amendment that would bar the Department of Agriculture from studying how best to adapt to a warmer planet. Ryan voted to defund various climate-advisory positions within the White House. He also voted for an amendment, proposed by Rep. Judy Biggert (R-Ill.), to cut $50 million from funding for ARPA-E, which funds long-shot energy research and development.

Eddie Munster is an out-and-out denier. Then again, given what Objectivists think about the environment, that shouldn't come as a surprise. 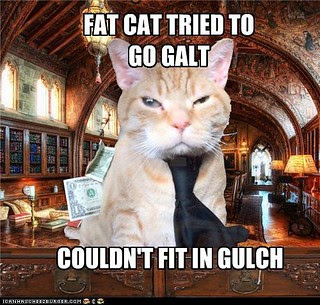 As for the next item, it bears on Romney's ideas about border security, but also on Romney and Ryan's veracity.


A lie-detecting virtual border official nicknamed "Elvis" is the latest high-tech approach to securing borders in the United States.

Developed by University of Arizona researchers in collaboration with U.S. Customs and Border Protection (CBP), the computer is known as the Automated Virtual Agent for Truth Assessments in Real-Time -- or AVATAR -- kiosk.

It uses sensors to screen passengers for unusual physiological responses to questioning -- which can indicate a subject is lying.

"What we're looking for is changes in human physiology," said Doug Derrick, a member of the University of Arizona team behind the project.

I wonder what Elvis/AVATAR would make of most political candidates, starting with Romney and Ryan? Speaking of Willard the Rat, here's a story about preventing bullying.


Back-to-school season gives parents and kids a lot to think about – new classroom supplies, goodies for sack lunches, the all-important first-day outfit. It’s also a good time for parents to talk to their children about the kind of social interactions they might encounter at school, says Dr. John Leipsic, assistant clinical professor of child psychiatry at the University of Arizona.

Leipsic, a father of three school-age girls and director of pediatric psychiatric consultation services at The University of Arizona Medical Center, recently shared some tips for parents on how to talk to their kids about one of the most age-old problems on the playground – bullying.

U of A also published an item about unethical business practices, which is on the same topic.


Early 2011 saw a spate of reports in the media about air traffic controllers sleeping on the job as a result of sleep deprivation. The potential harm from this behavior is obvious, but what about the average office job? Can sleep deprivation cause counterproductive, or even unethical, behavior in organizations?

“Over the past decade, Americans have been getting less and less sleep, and estimates are that this trend will continue,” said Professor of Management and Organizations Aleksander Ellis, the Charles and Candice Nelson Fellow. “In fact, in certain industries, lack of sleep is worn as a badge of honor.”

In a recent paper published in the Academy of Management Journal, Ellis and co-author Michael Christian of Kenan-Flagler Business School at the University of North Carolina-Chapel Hill demonstrate that lack of sleep can cause deviant behavior.

Robots don't need to sleep, or do they?

Allow me this aside before I present the final story from Arizona, which is particularly apt given Romney's embrace of Birtherism in Commerce Township, Michigan, on Friday. WOOD-TV has the relevant sound bite.


In addition to the obvious subtext, an additional one to consider is that no one should underestimate hatred of Detroit in Michigan politics. This includes the suburbs, especially the more distant ones like Commerce. Speaking of racism, one of the excuses racists use is fear of crime. Little do they know that their racism fuels more criminal activity, making it an ironic vicious circle.

“A number of previous studies have shown that racial discrimination may increase the risk of offending among African-Americans, especially males,” said Callie Burt, an assistant professor in the School of Criminology and Criminal Justice at Arizona State University. “And so in this study we were interested in understanding ‘how does this happen?’”

Burt and a team of researchers followed 700 African-American families who were originally located in Iowa or Georgia over an eight-year period. The caregivers and their children were interviewed every two years starting when they were in the fifth grade.

“What we were interested in looking at is how different situations – how kinds of interactions – differ between African-Americans and whites?” Burt said. “And in particular we focused on one thing that African-Americans experienced that Whites do not – and that’s interpersonal racial discrimination.”

Racism promotes criminality, which is used to justify racism. I wonder if that's a bug or a feature. Probably both.

That's it for this edition. In honor of U of A contributing the majority of the stories from their state, I present the Wildcat Marching Band marching their pregame show from 2008.